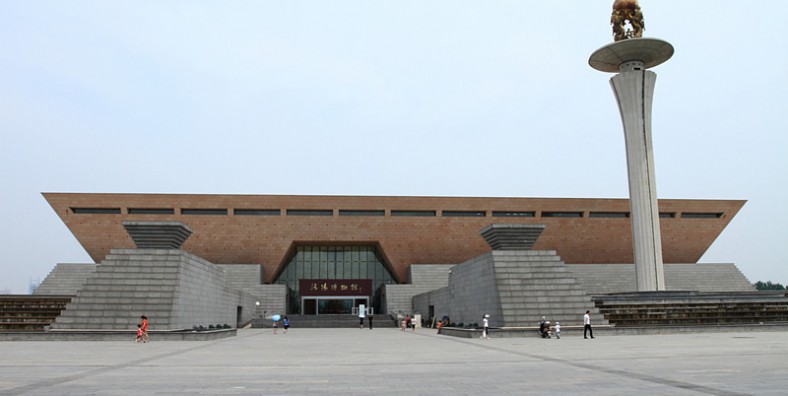 Why is Luoyang Museum So Special?

Built in 1958, Luoyang Museum is the only comprehensive history museum in Luoyang. It shows the long history and culture of this ancient capital. As a major Chinese cultural center, the city was the capital of more than a dozen ancient dynasties, such as the Xia (2100 -1600 B.C.), the East Zhou (770 – 256 B.C.). It experienced prosperous growth, making it one of the most affluent cities of the Tang Dynasty. To enlarge the space for the rich collection of relics, the new museum is completed and opened to the public in 2009, located in the south of Niewan Village.

Where is Luoyang Museum?

Luoyang Museum is located at Nietai Road, New District, Luoyang, and the Chinese address is: 洛阳市洛龙区聂泰路. And the park is about 133 km from Zhengzhou City (郑州市), the capital of Henan province (河南省).

If you want to get rid of hustle of transportation and troublesome navigation, you can book a private tour package which covers visiting, dining and transfer from us. Our local tour guide and driver will escort you to Luoyang Museum with speed and convenience, and take care of all the details. You just need to focus on travel.

You may take bus no 15, 37 or 62 to Luoyang Museum, or you may take a taxi. The museum lies just south of Luohe River which spans the city of Luoyang from east to west.

Firstly you will see a Gold Seal crafted during the West Jin Dynasty (265 – 316 A.D.) Its base is square and engraved with five Chinese characters in the style of seal cutting. You will find the layout and the design of this seal simple but orderly.

The Bronze Wine Jug (乳钉纹铜爵), It is the earliest bronze ware found in China, and a national treasure. A jue (/jwair/) is an ancient wine jug with three legs and a loop handle. In the Xia Dynasty, drinking wine was a privilege for the nobility. A bronze jue was a symbol of someone’s status. A jue’s typical features are a long, canal-like spout (流 liu /lyoh/ ‘flow’) and a shorter counterpart on the other side (尾 wei /way/ ‘tail’). This bronze jue has a long spout, pointed tail, slender waist, and oval bottom.

A Replica of ‘Golden Throne’

The last piece you can’t miss in Luoyang Museum is a replica of ‘Golden Throne’ sent by the Beijing Forbidden City. In China’s ancient history the golden throne was used exclusively by successive Emperors in the Hall of Supreme Harmony (Taihedian) within the Forbidden City in Beijing. The replica, made at a ratio of 1:7, is carved with dragons and embedded with jade and ruby.

Speaking of the Tang Dynasty (618 – 907), you may know of the world-renowned Tang tri-colored glazed pottery (唐三彩), a type of pottery produced with three colorful ceramic glazes, namely yellow, green and blue and the Luoyang Museum exhibits such pottery, including this classic example of a plump and life-like woman; mirroring the female aesthetic of the Tang Dynasty. Careful inspection will reveal complicate craftwork of the Tang tri-color glazed pottery, and that she is in a long brown gown, coils her hair in a bun and has but light makeup.

The Stone Winged Lion (石辟邪), a bixie is a mythical beast in China’s ancient legends. It is said it can ward off evil spirits and bring good luck. It looks like a lion with wings and it usually appears in tombs. This sculpture was unearthed in 1992, and is 1.9 meters (6’3”) high, 2.97 meters (9’9”) long, 0.9 meters (3’) wide, and weighs more than 8 tonnes. It is the largest stone bixie found in China.

The Opening Time: 09:00 – 16:30;Close on Monday (except during Peony Culture Festival and holidays.)

Tickets are not issued after 4:30 pm