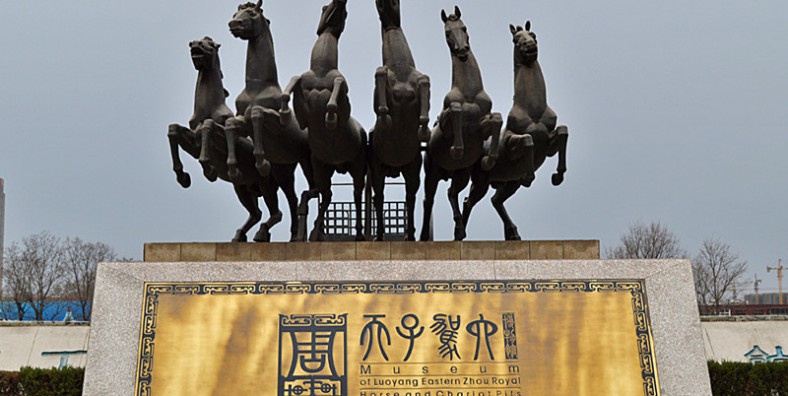 Why is Luoyang Tianzi Jialiu Museum is So Special?

The Tianzi Jialiu Museum (洛阳周王城天子驾六博物馆), or Museum of Emperor’s Chariot Drawn by Six Horses, is a museum located on an ancient burial ground. The museum is divided into two sections, the sacrificial pits and the exhibition building, where visitors can learn about the history of Luoyang City in its role as the royal city of Zhou Tianzi during the Eastern Zhou Dynasty. The museum also features a large, bronze horse and chariot exhibition area. The remains of the “Jialiu” chariot in the No. 5 chariot pit are particularly marvelous, as this was the chariot used by Zhou Tianzi himself.

The museum’s former English name is quite long while it is colloquially called “Tianzi Jialiu Museum”. “Tianzi” means emperors while “Jialiu” means their chariots driven by 6 horses. The dicovery of the Tianzi Jialiu Site has great impact on the Chinese archaeology and history.

Where is Luoyang Tianzi Jialiu Museum?

Located in the center of the city of Luoyang and more specifically in the center of Luoyang Eastern Zhou Royal City Square, the Museum of Emperor’s Chariot Drawn by Six Horses of Zhou Dynasty is within walkable distance from Luoyang Railway Station. Luoyang Tianzi Jialiu Museum is about 131 km from Zhengzhou City (郑州市), the capital of Henan province (河南省).

If you want to get rid of hustle of transportation and troublesome navigation, you can book a private tour package which covers visiting, dining and transfer from us. Our local tour guide and driver will escort you to Luoyang Tianzi Jialiu Museum with speed and convenience, and take care of all the details. You just need to focus on travel.

For independent travelers you can:

It is walkable along the axis down south from Luoyang Railway Station. Many buses take you there including buses 6, 41, 50, 52, 56, and 86 and get off at Wangcheng Square (王城广场).

What to See in Luoyang Tianzi Jialiu Museum

The Statue of the Six Horses

The statue of the six horses is the symbol of the Wangcheng Square as well as the sign for the entrance to the underground museum of Luoyang Eastern Zhou Royal Horse and Chariot Pits. Ancient texts indicated that during emperor’s reign the number of horses a chariot had was a mark of the social prestige of its owner. Emperor chariots had six horses, vassal chariots had five, minister chariots had four, bureaucrat chariots had three, official chariots had two and civilian chariots had only one.

There are two sacrificial pits, the larger being 42 meters long, that both house petrified remains of horses and chariots that were sacrificed during Eastern Zhou Dynasty. Chariots are mostly decomposed, only their wheels remaining along with several horse skeletons. Eastern Zhou Dynasty, one of the first lost living and powerful dynasties in that region, ruled over the area from 770 BC to 256 BC, when it was overpowered by Qin Dynasty. Luoyang used to be the capital of its empire and a city of great importance at that time.

1. Buy tickets online ahead of time. For most large, metropolitan museums, you can buy tickets online before you even leave the comfort of your home. You’ll avoid the hassle of possibly long lines.

2. Lose the phone. No one wants to visit a museum while other people are livestreaming on Instagram or Snapchat, so don’t be the person to do that yourself.