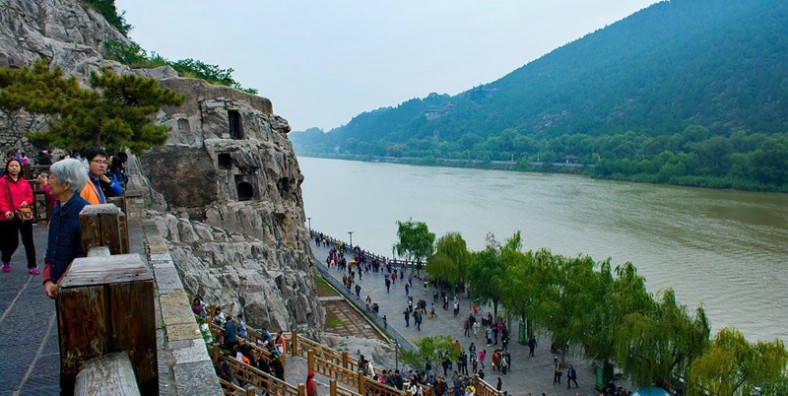 Why is Longmen Grottoes So Special?

In Luoyang, the Longmen Grottoes, also called the Longmen Caves, are the biggest draw among Luoyang’s attractions. Read on for the highlights you shouldn’t miss.  The grottoes and niches of Longmen contain the largest and most impressive collection of Chinese art of the late Northern Wei and Tang Dynasties (316-907). These works, entirely devoted to the Buddhist religion, represent the high point of Chinese stone carving.

Where is Longmen Grottoes?

Located in the south of Luoyang city, Longmen Grottoes is about 135 km from Zhengzhou City (郑州市), the capital of Henan province (河南省). Address in English: No.13, Longmen middle street, Luolong District, Luoyang City. and the address in Chinese is 洛阳市洛龙区龙门中街13号.

If you want to get rid of hustle of transportation and troublesome navigation, you can book a private tour package which covers visiting, dining and transfer from us. Our local tour guide and driver will escort you to Longmen Grottoes with speed and convenience, and take care of all the details. You just need to focus on travel.

Take bus 81, 53, 60 from Luoyang Longmen Train Station, the high speed station connecting Xian and Beijing to arrive Longmen Grottoes directly; Or contact us to pick you up with private car.

Fengxian Temple was built in the Tang Dynasty and it is the largest grotto in Longmen Grottoes with a width of 36 metres (about 118 feet) and a length of 41 metres (about 136 feet). There are nine major figures of various facial appearances and temperaments in the temple that were built in accordance with the Buddhist rite and their relationships by the artists. The most impressive figure is the statue of Vairocana Buddha sitting cross-legged on the eight-square lotus throne. It is 17.14 metres (about 56.23 feet) in total height with the head four metres (about 13 feet) in height and the ears 1.9 metres (about 6.2 feet) in length. Vairocana means illuminating all things in the sutra. The Buddha has a well-filled figure, a sacred and kindly expression and an elegant smile.

In the north side of Fengxian Temple, Lotus Cave is shaped from a nature karst cave and got its name owing to a huge relief lotus on its ceiling. Standing for holiness and purity in Buddhism, the flower is surrounded on the south and north sides by three apsarases with beautiful postures, all of whom facing the main statue, to embrace this holy lotus. Under the lotus, there is a vivid sermon scene about 5-meter main Gautama Buddha and his students in standing position. There are various small Buddha statues around them and join in this sermon.

Note: for better protection, Lotus Cave can be visited outside only. Tourists should take flashlight and telescope to have a clear looking.

Qianxi Temple is a representative cave of the Tang dynasty. It is famous for the flowing streams around the carvings. This cave, which is 9 meters wide and high (29.5 feet) and 7 meters (23 feet) deep, was constructed and carved at beginning of the Tang Dynasty. Seven statues are in this temple. The major Buddha in this cave is Amitabha, which is about 7.38 meters (24.2 feet) high. His face is round and chubby with a smart expression. The most outstanding statue is of Mahasthamaprapta Buddha. It is the most beautiful Buddha figure to have been built during the Tang Dynasty.

Scenic guide service
For better understand the significance and history of carvings, a guide is needed in Longmen Grottoes. There are audio narration sets offered with different languages of Chinese, English, Japanese, Korean and Cantonese for 20 yuan each. Hiring an English tour guide with different star standard, vary from 50 to 200 yuan.

What to bring: Comfortable shoes & flashlight
Though the pathway between the river and the grottoes are paved and well-maintained, there are many stairs to climb (up and down) to see the various Buddhas in the caves, tourists should wear comfortable shoes. Also the lights in the caves are dim, take a flashlight will helpful. Also umbrella, drinking water, and comfortable cloth are practicable.