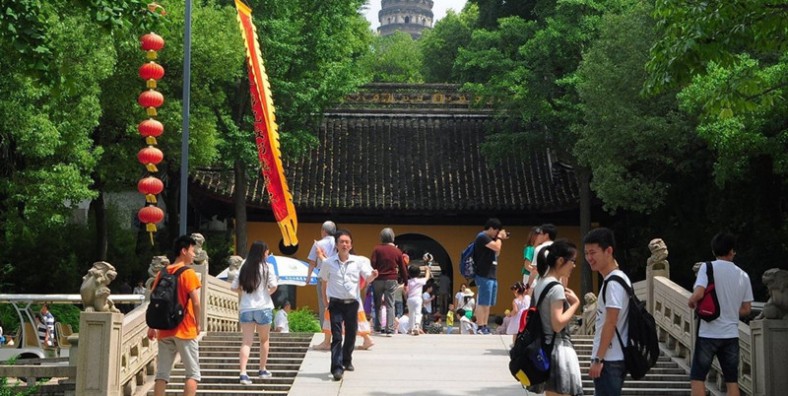 Tiger Hill enjoys the good reputation of "the first scenic spot of the State of Wu", because Suzhou was the capital of the State of Wu during the Spring and Autumn Period. This is the place where Prince He Lv was buried after his death. This area was named Tiger Mountain because someone saw a tiger lying on Helu's tomb.

Why is Tiger Hill So Special?

Tiger Hill (Hu Qiu) enjoys a reputation as ‘the first scenic spot in the State of Wu’, for Suzhou was once the capital of the State of Wu during the Spring and Autumn Period. It is where the King of Wu, He Lu, was buried after his death. The area was named Tiger Hill after a tiger was seen lying on the tomb of He Lu. With a history of more than 2,500 years, the Huqiu has been known as No. 1 Sight of Suzhou. Tiger Hill, which is 34 meters hight and about 5 kilometers from Suzhou downtown, is a must see for tourists, for its natural beauty as well as historical sites.

Where is Tiger Hill

Tiger Hill Scenic Area is located in the northwest corner of Suzhou ancient city and has a long history of more than 2500 years.

Tiger Hill is also located with the Yunyan Pagoda, which was tilted before the Qing Dynasty. It is said that the tower has been tilted since it was built in 959-961. It is a 48-meter-high brick tower with seven floors and eight sides. It was built earlier and higher than the Leaning Tower of Pisa. It tilted about 3.5 degrees to the north. Today, this 1,000-year-old pagoda has become a symbol of Suzhou.

Jianchi: A small rectangular pond, one of the most famous scenic spots in Tiger Mountain. He Lv is a famous samurai and sword collector. It is said that the sword pool contains He Lv’s treasured sword deep in the water, and some 3,000 swords are believed to be buried below. This site has not been excavated, because the foundation of the leaning tower is on this site.

Situated on the edge of the western mountain, the charming villa with its pagoda landscape as the background has collected the best specimens of Suzhou style bonsai. The dense vegetation behind the hillside forms a special climate zone and has now become a paradise for winged birds. In autumn dusk, thousands of herons circle around the pagoda, forming a huge wonder.

Sword testing stone is a rock split in half by the legendary sharp sword.

March-April and September-October are the best travel times in Tiger Hill.