Guozhuang Villa and Garden in Hangzhou 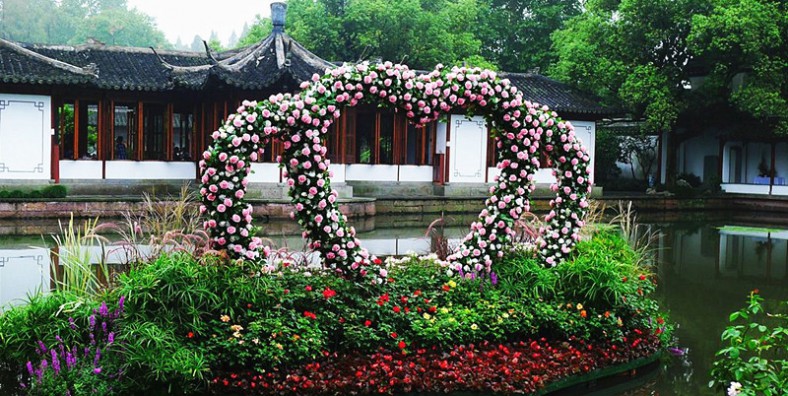 Guozhuang Garden is one of the most beautiful private gardens in Hangzhou. Also popularly known as Songzhuang (Song’s Villa), Guozhuang Garden was originally built in 1907 in late Qin Dynasty by a local silk merchant named Song Duanpu. In the Minguo period (Republic of China), Song’s family declined and sold the garden to Guo Shilin from Fengyang. Later the garden was dubbed as Guozhuang (Guo’s Villa).

Why is Guozhuang Villa and Garden So Special?

With a mountain in the back and the west lake in the front, the garden is known as ‘Number One Garden of the West Lake’ thanks to its tranquil environment, well-preserved buildings, and tasteful landscaping layout. The key feature, or spirit, is water. Cleverly juxtaposing shade and light, curved and straight, yin and yang, the garden of Guo Zhuang is a wonderful embodiment of the Chinese wisdom of Taoism and the Way of Nature.

Guo’s Villa (also Guo Zhuang Scenic Spot, or Guozhuang Garden) is the best existing traditional private residence in Hangzhou. It was built in late Qing Dynasty. Located on the west bank of the West Lake, Guo’s Villa is a small Jiangnan garden. Although the scale of Guo’s Villa is relatively small, the rockery and the pool are all in good condition. It is a good place for tea viewing at the West Lake. Guo’s Villa and Su Di face each other, sitting on the platform facing the West Lake, looking at the mountains and Leifeng Pagoda in the distance, it is very enjoyable. Here in the summer, you can enjoy the lotus flowers blooming in the West Lake. The scenery is very beautiful.

History of Guozhuang Villa and Garden

Completed in 1861, this elegant garden villa was built as a private retreat for a wealthy Qing Dynasty silk merchant. Guo’s Villa (Guō Zhuāng, 郭庄) is a fine example of Chinese aesthetics in which the manmade and natural blend in harmonious balance.The Villa opened to the public in 1991, after being restored. It faces Spring Dawn, by the Sudi Causeway which crosses the West Lake, and has a distant view of the serene Southern Screen Hill and the Baochu Pagoda. The villa has two sections (1) Living in Quietness, where the owner lived (2) the Sky in the Mirror garden, with a pond surrounded by roofed corridors (lang), bridges, rockwork, trees and flowers.

The villa consists of two sections. The Jingbiju (Quiet Residence) is where the owner used to live and meet guests, well furnished with antique furniture. Yijingtiankai (The Skay in the Mirro) is a garden section. The sky-mirroring pond in the center is surrounded by corridors, stone bridges and rockeries, as well as trees and flowers.

Around the pond are also scenic spots such as Xiangxuefenchun (Plum Blossom and Snow Sharing Spring), Chengfengyaoyue (Riding the Wind and Inviting the Moon), Liangyixuan (Always Pleasant Pavilion), Shangxinyuemu (Pleasing both to the Eye and the Mind), jingsuge (Dyke-viewing Pavilion) and Rumuchunfeng (Bathing Like in Spring Breeze),etc.

Guozhuang Garden is mainly divided into four parts – the large lake, the small lake, the rockeries and residential area and the West Lake area. Within the garden, two separated lakes in the garden present different views. The bigger lake appears flat and spacious with a slab zigzag bridge and a long corridor. The smaller one is circled by the pavilions and rockeries and residential area.

Guo’s Villa is a walking-friendly maze of winding roofed corridors, mansions, pagodas, rockeries and soothing floras. Bringing a piece of nature, in a natural way, into an enclosed living space, is the main principle of traditional Chinese gardening south of the Yangtze River. The “Borrowing Scenery” technique, achieved through myriad ornate windows, full moon-shaped doors, and strategically placed corridors, is loyally observed here.

How to get to Guozhuang Villa and Garden From Hangzhou City

If you want to get out of the traffic and hassle of navigation, you can book a private tour package that includes visiting, dining and transfer from us. Our local guide and driver will escort you to Guozhuang Villa and Garden in Hangzhou in the fastest and most convenient way and take care of all the details. You just have to focus on the visiting.

You may take the tourist bus no.1 or 2 and get off at the stop of Huanpu (花圃) and walk there. You may also add it to your circular walk along the West Lake after your stroll along the Lotus Breeze in the Curved Garden.