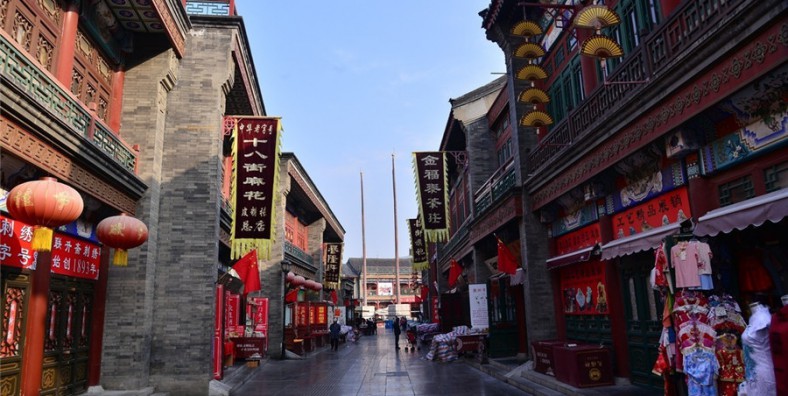 National AAAAA tourist attraction. As one of the ten sights of Tianjin, Tianjin ancient culture street has always adhered to the management characteristics of "Chinese, Tianjin, cultural and ancient" and mainly manages cultural products.

Why is Tianjin Ancient Culture Street So Special?

Although it is essentially a commercial street, it attracts tourists who come to visit its special architectural style, appreciate its classic cultural features, buy various folk arts and crafts and taste delicious local snacks. Most importantly, when tourists walk there, they will be deeply impressed by the splendid replicas of classical buildings in Qing Dynasty (1644-1911) with folk style.

Where is Tianjin Ancient Culture Street

It can be traced back to 1404 AD. These buildings imitate the style of Ming and Qing dynasties.

There is an ancient temple on this street that has enjoyed a good reputation for hundreds of years. It was originally called “Tianfei Palace” and later renamed “Tianharem”

It was completed and opened on New Year’s Day in 1986. Since ancient times, this area has been Tianjin’s largest fair trade and annual goods market. Every spring, stilts, dragon lanterns, dry boats, lion dances, etc. are performed here. In the newly-built ancient culture street, except the archway at both ends and the palace foreplay building, nearly a hundred houses are all small ancient buildings imitating Qing folk.

The ancient cultural street covers a total area of 2.2 million square meters, and the ancient buildings are strewn at random with twists and turns. All the buildings here emphasize practical style. All the houses here are built with green walls and red pillars, decorated with various forms of sliding doors, windows, railings, roof wings, and equipped with plaque, couplets, lanterns, banners. There are exquisite carvings and more than 1500 colored oil paintings, adding to the classical culture of the streets.

Tianhou Palace is situated at the middle section of the Ancient Culture Street, Nankai District, paying tribute to the Goddess of the sea. The temple was apparently built in 1326 AD in deference to the heavenly Goddess and in hope of protection for Tianjin’s ocean going population. The principal building of the palace is the Main Hall constructed on a high and large pedestal, which is of the typical wooden structure style of the mid and late Ming Dynasty (1368-1644). The architectural complex is one of the three major Tianhou palaces in China, and also one of the oldest extant Tianhou palaces.

Yuhuangge Taoist Temple was once the most famous building group in Hai River Triple Junction. It is the largest Taoist Temple with more than 600 years of history.

Most importantly, when tourists walk on the streets, they will be deeply impressed by the splendid replicas of classical buildings with folk style in Qing Dynasty (1644-1911). Tourists will feel that they are in the past, surrounded by traditional Chinese culture and customs, and return to a friendly and peaceful life.

The best time to visit is all the seasons.

The main climatic characteristics are clear seasons, windy spring, drought and less rain. Summer is very hot and the rain is very concentrated. In autumn, the air is cool and the temperature is moderate. Winter is cold and dry with less snow. Therefore, the four seasons are the best season to visit Tianjin.