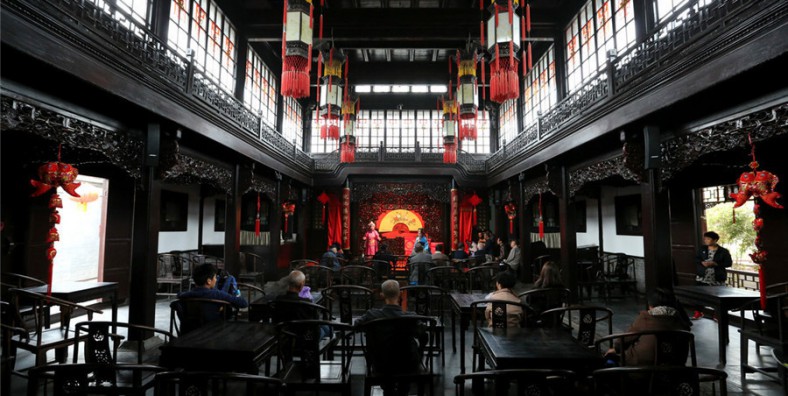 Shi Family Courtyard embodies the unique style of the residential buildings in Qing dynasty. Founded in 1875, it has a history of 140 years.

Why is Shi Family Courtyard So Special?

Many rooms have classical furniture, calligraphy and painting, and a vast master garden. It is a well-preserved monument to the commercial spirit before the Chinese revolution and is also the scene shooting of many popular historical dramas in China.

Where is Shi Family Courtyard

Shi Family Courtyard is located in Yangliuqing Ancient Town, Xiqing District. It is the former residence of Shi yuanshi county, the fourth son of Shi Wancheng, one of the eight famous teachers in Tianjin. The Shi family was one of the eight noble families in Tianjin in the late Qing dynasty.

The Stone Academy was founded in 1875 and covers an area of more than 6,000 square meters.

In 1948, on the eve of Tianjin’s liberation, most of Zunmeitang’s houses had been sold to others.

In June 1987, the Xiqing District People’s Government listed the “Zunmeitang” residence as a district-level cultural relic (commonly known as the Shijia compound), protected it and allocated funds to repair it. In 1992, the Shi Family Courtyard courtyard opened to the public as a “willow green museum” and is a municipal cultural relic protection unit in Tianjin.

With the changes of the times, the trees became popular. By the late Republic of China, the four gates headed by “Zunmeitang” were divided into nearly 20 small halls. Although some of the children of later generations are industrious and enterprising, they are mostly dandies who eat, drink and play and live parasitically. Shi Yuanshi, the host of “Zunmeitang”, not only paid attention to the accumulation of family property, but also was good at expanding his power and making friends with dignitaries. His wife was the niece of Zhang Zhidong, then governor of Guangdong and Guangxi. He was also met successively by Li Hongzhang and Empress Dowager Cixi. There are four titles. After the Republic of China, when new China was founded, the idle members of the Shi family actually stole the ancestral tombs, sold them and squandered them, finally ending the Shi family’s 200-year history of prosperity.

The corridor and cloister of Shijia courtyard is about 800 meters long, and its story cannot be heard out. If you come to Yangliuqing’s Shijia compound, you will not only hear and see the rise and fall of the Shijia, but also meet the descendants of the Shijia in the street and listen to their stories about the Shijia.

The living room has now been restored to its original furnishings. Separated from the flower hall by a wall is the opera house, which is the largest residential opera house in the north. Its natural and graceful appearance, especially its beautiful interior decoration, is famous all over the world and astonishes the viewers. It was a common practice in Jin Gu’s wealthy residences in Qing Dynasty. Now it is a municipal cultural relic protection unit in Tianjin.

Now Shi Courtyard is served as the folk custom museum in Yangliuqing, which has a large collection of folk custom museum in Yanliuqing, which has a large collection of folk art pieces like Yanliuqing New Year pictures, brick sculpture. It is a worthwhile visit for tourists, and those generally interested in pre-revolution Chinese history and culture – a touch far from the city, an hour or mores travel. Then spend an enjoyable 2 hours on a self-tour of the grounds.