The Ancient City of Dahe in Kumul 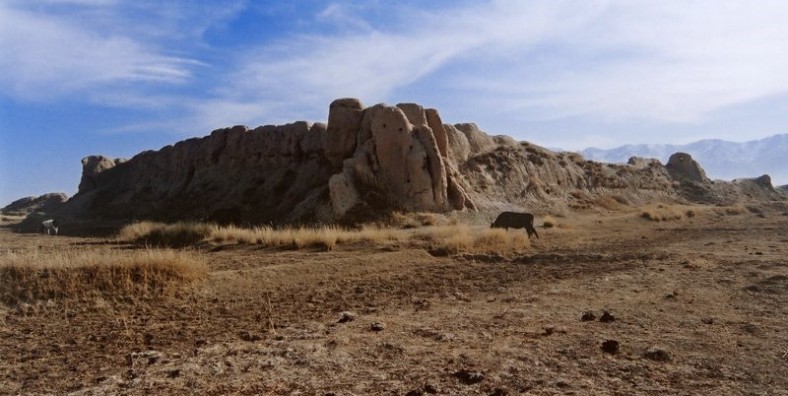 Haibo 1644 meters is the largest and best preserved ancient city site of Tang Dynasty in Hami area, so it is called Dahe Tang Cheng or Dahe Ancient City.

Why is The Ancient City of Dahe So Special?

The central area at the bottom of Balikun Basin is flat, with a Ma Pingchuan, fertile land and abundant water resources. It is extremely suitable for farming. It is 15.5km away from the county seat, with roads leading to the township government and the county seat and convenient transportation. Haibo 1644 meters is the largest and best preserved ancient city site of Tang Dynasty in Hami area, so it is called Dahe Tang Cheng or Dahe Ancient City.

Where is The Ancient City of Dahe

The Ancient City of Dahe Located on the plain area to the southeast of Dongtouqu Village, Dahe Township, Barkol County, it’s the site of a city built by the Chinese troops stationed here to reclaim wasteland during the Jinglong reign of the Tang Dynasty.

History of The Ancient City of Dahe

The ancient city was built in 710, the fourth year of Tang Jinglong’s reign. It is rectangular in shape. A wide wall in the middle divides the ancient city into two small cities, east and west, the main city and the subsidiary city respectively.

On other military arteries far away from the city, Tang Jun has also built many beacon towers. The city and beacon towers face each other, observing and understanding military intelligence at any time and reporting it to the headquarters in time. Most of the soldiers stationed at the beacon towers also cultivated fields around them. The city and the beacon tower face each other. The Iraqi army, the Han navy stationed in Gaochang and the Tianshan army stationed in Beiting are horns with each other, stabilizing the situation in the north of Tianshan in Tang Dynasty. At this time, Luo Bin, a famous poet who was one of the “four outstanding figures of the early Tang Dynasty”, joined the army and came to the headquarters of the Yiwu army. Seeing the arduous life of the garrison soldiers in the wasteland and their heroic spirit in guarding the frontier, he penned a poem from “Xi Shi Pu Lei Jin”: “The second court is at an end, and the hearts of thousands of people are sad. The mountain road belongs to the south and the headwaters flow from the north. The night wind is still fresh and the new moon shines in autumn. The stove fires through the walls of the army and the smoke goes up to the garrison building. The dragon court fought hard, but Yan Han would be sealed. Don’t go down the mountain of orchid. empty air makes the Han kingdom ashamed. ” A crescent moon, cold and bright, the northern chill blew ice on the armor of the soldiers guarding the border. The stove fire that cooked the dinner flushed the inside and outside of the tent and the faces of soldiers returning from farming. Bring some warmth to everyone. After a hot dinner, it is time to get into a warm bed and have a good sleep to relieve the fatigue of the day. Suddenly, I saw the flames on the beacon tower in the distance, and there was a rush of bangzi. The soldiers were armed to the teeth and boarded the watch tower. They were ready to fight fiercely at any time.

Main Attraction of The Ancient City of Dahe

The city is 240m long from the south to the north, 357m wide from the east to the west, and composed of two cities, namely a main city and a subsidiary city. With its gate facing west, the city has four watchtowers on four corners, and outside the wall there are buttresses and fortified platforms. There unearthed a lot of cultural relics inside the city, including pieces of pottery, stone mills, construction materials, tile-ends with lotus designs and a few coins. It’s the largest site of the Tang Dynasty well preserved in Hami. Now it is listed as a major cultural site under the protection of autonomous region.

Many relics were collected in the city, mainly pottery and bronze ware, with few ironware, including bronze mirrors, protective bronze Buddha, money, and bronze rods. The building materials include gray lotus tiles and lotus tiles, which are typical relics of the Tang Dynasty. Large pottery waste vessels and large stone grinding discs are scattered in the city. All of these showed the grand occasion of agricultural production at that time to tourists, proving that this place was once a large-scale grain depot.

Best Time to Travel The Ancient City of Dahe

Every autumn, that is, August and September, is the best time to visit Kumul.

At this time, the weather began to cool and the fruits began to mature. This is a very suitable time to travel. At this time, most scenic spots began to hang attractive gold. Let’s travel in the golden ocean. The natural scenery around Kumul is very beautiful. In our spare time, we take our family to Kumul to play, eat delicious fruits and enjoy different local conditions and customs. I believe this is a very beautiful moment and a very happy memory.