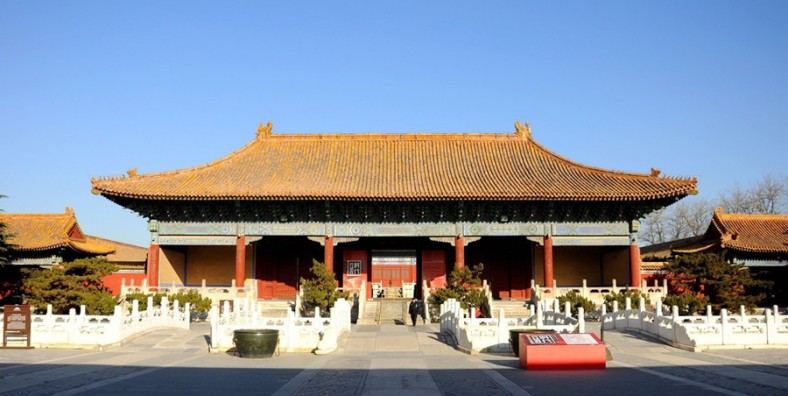 Imperial Ancestral Temple is a historic site in the Imperial City, just outside the Forbidden City, where during both the Ming and Qing Dynasties, sacrificial ceremonies were held on the most important festival occasions in honor of the imperial family's ancestors.
English Name: Imperial Ancestral Temple in Beijing or Taimiao of Beijing
Other Name: The Working People's Cultural Palace
Chinese Name: 北京太庙或劳动人民文化宫
Opening Hours: Apr. to Oct.: 6:30 - 19:30 Nov. to Mar.: 7:00 - 17:30

Beijing Working People’s Cultural Palace, formerly The Imperial Ancestral Temple, or Taimiao (simplified Chinese: 太庙; traditional Chinese: 太廟; pinyin: Tàimiào) of Beijing, is a historic site in the Imperial City, just outside the Forbidden City, where during both the Ming and Qing Dynasties, sacrificial ceremonies were held on the most important festival occasions in honor of the imperial family’s ancestors.

Originally called the Imperial Ancestral Temple, Working People’s Cultural Palace is now a “school and amusement park”. In the Ming (1368 – 1644) and Qing (1644 – 1911) Dynasties, it was used by royal family members to offer sacrifices to their ancestors. On May Day 1950, Chairman Mao opened it to the public and the name was changed to the present. Now Working People’s Cultural Palace is a place for local people to entertain themselves. Exhibition halls, libraries, and stadiums are built inside. Various activities like lectures and movies are held here.

The temple, which resembles the Forbidden City’s ground plan, is a cluster of buildings in three large courtyards separated by walls. The main hall inside the temple is the Hall for Worship of Ancestors, which is one of only four buildings in Beijing to stand on a three-tiered platform, a hint that it was the most sacred site in imperial Beijing. It contains seats and beds for the tablets of emperors and empresses, as well as incense burners and offerings. On the occasion of large-scale ceremonies for worship of ancestors, the emperors would come here to participate.
Flanking the courtyard in front of this hall are two long, narrow buildings. These were worship halls for various princes and courtiers. The Western Wing housed the memorial tablets of meritorious courtiers, while the Eastern Wing enshrined various princes of the Ming or Qing dynasty.
Behind the Hall for Worship of Ancestors are two other main halls. The first was built in 1420 and used to store imperial ancestral tablets.

Covering an area of 140,000 square meters, the compound is laid out parallel to north-south axis of the Forbidden City. Aligned with the central axis, three magnificent halls in Imperial Ancestral Temple are the major The palace complex in Taimiaobuildings of the complex, each with its own supplementary halls. The Front Hall sitting on a three-tier marble base has a double-eaved hip roof, which is covered with yellow glazed tiles. The hall used to be the venue of holding the sacrificial ceremony. At the time, the memorial tablets of the emperors and empresses would be removed here. Flanking the courtyard in front of this hall are two auxiliary halls, which were worship halls for various, princes and meritorious ministers of the dynasty. The Middle Hall was also called Qindian(Sleeping Hall). It houses the memorial tablets of the emperors and empresses of all gene rations of the dynasty. The Rear Hall, which was also known as the Tiaodian (Ancestral Hall) and furnished in the same manner as the middle hall, enshrined the memorial tablets of remote imperial ancestors. Additionally, there are such subsidiary structures as the glazed gates, white marble arch bridges, Shenchu(Divine Kitchen) and Shenku(Divine Warehouse).