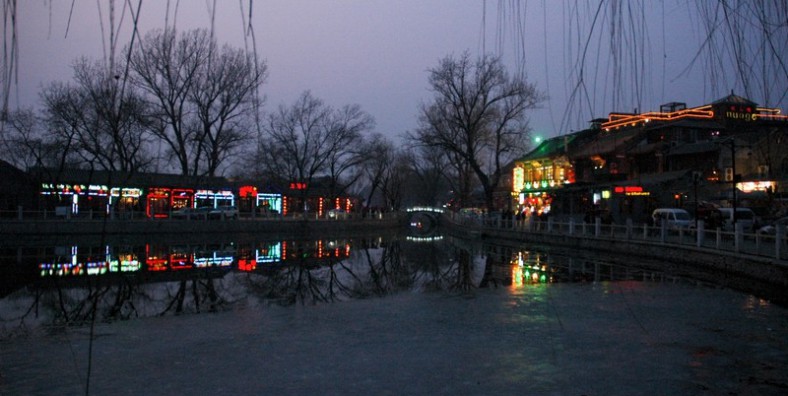 QianHai is the lake between HouHai and BeiHai Park (across Di'AnMen street) and includes Lotus Lane along the south west side, with lake-side bars and dining.
English Name: Qianhai Lake in Beijing
Chinese Name: 北京前海
Best Time: Spring, Autumn, Summer
Recommended Visiting Hours: 1 or 3 hours
Location: North-west of the Forbidden City and north of the Beihai Lake, Beijing

Shichahai (simplified Chinese: 什刹海; traditional Chinese: 什剎海; pinyin: Shíchàhǎi) is a historic scenic area consisting of three lakes in the north of central Beijing. They are located to the north-west of the Forbidden City and north of the Beihai Lake. Shichahai consists of the following three lakes: Qianhai (前海), Xihai (西海) and Houhai(后海). In imperial times it was called the Riverbank (河沿; héyán). XiHai, HouHai and QianHai are collectively known as ShiChaHai. All three have interesting places to eat and drink, and are particularly popular at night.

Shichahai consists of 147 hectares and dates back to the Jin Dynasty. From the time of the Yuan Dynasty it was the northernmost part of the Grand Canal linking Hangzhou in the south to Beijing in the North of China. Because of this, the Shichahai area used to be the most important commercial district with all kinds of activities going on. It harbors several temples and mansions. Shichahai literally means “the lake of ten temples”. Around the lake there are ten famous Taoist and Buddhist temples and several formal royal mansions and gardens. The most well known are the Prince Gong Mansion and the Prince Chun Mansion. Shichahai is a famous scenic spot in Beijing, and it is near the north-gate of the Beihai Park. The borders of the lakes are lined by tall trees. In the summer tourists rent boats to paddle on the lakes. In the winter many people come to ice-skate. In 1992, the municipal government of Beijing declared it as a “Historical and Cultural Scenic Area”.

What to Do and See

Shichahai is always a good place for local residents’ recreational life, and in the last 200 years, many governmental officers, celebrities, monks and nuns chose to build mansions, temples and nunneries in it. Thus, the attraction of Shichahai lies not only in its natural beauty, but also in the historical value of its architecture. The most famous ones among these historical buildings are Prince Gong’s Mansion (Gong Wang Fu), Price Chun’s Mansion (Chun Wang Fu), the Former Residence of Song Qing Ling, Guang Hua Temple and the Former Residence of Mei Lan Fang, a well-known Beijing Opera master. Need to mention that the famous Shichahai Bar Street is actually Houhai Bar Street, which is in the area.

The greatest point of interest in Shichahai today is its residences, Hutong and Courtyard. Visiting Hutongs by pedicab has become a popular activity for visitors from China and abroad. The most famous is Jin Si Tao, which actually includes 18 hutongs and keeps the original layout. Another one is Skewed Tobacco Pouch Street (Yandai Xiejie), meaning an oblique street which looks like a long-stemmed pipe. This street used to be a famous street selling long-stemmed pipes. In the east area, Nanluoguxiang (South Gong and Drum Lane) is an interesting hutong renowned for its long history, culture, specialty stores and distinctive foods.

Some snack streets also lie in Shichahai, and people can find two Old Brands here. One is Kao Rou Ji, a restaurant selling roast meat, which has a history of over 150 years. The other is Bao Du Zhang, which has sold cooked tripe of sheep for four generations.
By visiting Shichahai, visitors will get an authentic taste of the style and features of Old Beijing.

How to get to Shichahai