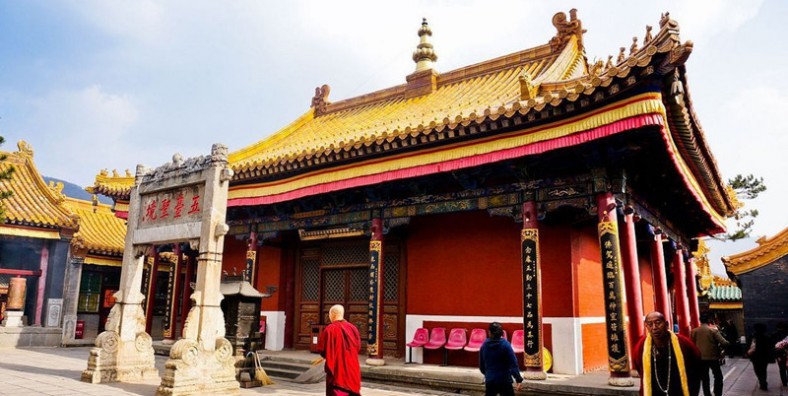 Why is Pusa Ding Monastery in Mount Wutai so Special?

The Monastery of Pusa-Ding (菩萨顶) sitting at the highest point of Central Terrace at the peak of Lingjiu-feng （灵鹫峰）, in north-west of Town Taihuai-zhen (台怀镇). The temple structure is considered the best of all temples in Mount Wutai. It is the largest and most complete Tibetan Monastery in Wutaishan.

Where is Pusa Ding Monastery?

The Monastery is about 210 km from Taiyuan (太原), the capital of Shanxi province, and about 144 km from Xinzhou (忻州).

If you want to get rid of hustle of transportation and troublesome navigation, you can book a private tour package which covers visiting, dining and transfer from us. Our local tour guide and driver will escort you to Pusa Ding Monastery with speed and convenience, and take care of all the details. You just need to focus on travel.

The Temple was called The Great Monastery of Manjushri (大文殊院) when it was first established in the Northern Wei Dynasty during the reign of Emperor Xiaowe (孝文帝 671-499 BC).

The most glorious period of the Monastery was during the Qing Dynasty (1644-1911) when it was converted into a Lamasery by Emperor Shunzhi (顺治帝) in the year 1656. In order to further increase the faith from Tibetans and Mongolians, Emperor Kangxi (1662-1722) bestowed the title of Provincial Commander-in-Chief to the monastery’s Senior Lama and ordered the whole state of Shanxi to allocate contributions to the temple. The roofing tiles of the Monastery were also changed to royal yellow glazed tiles in the years 1683-1691, like those used for imperial buildings. All Lama temples were then under the control of Pusa-Ding as the Imperial authority had made it the highest leading position of the region. The site has been the accommodation lodge for Qing Emperors, Mongolian warlords and Tibetan Lamas whenever they traveled to Wutaishan for pilgrimage.

The 108 steps were made up of whole piece of stone and they are like layers of stone plastered towards the sky, steep and precipitous. The colorful Gateway on the platform above the top of 108 stone steps was said to be erected by Emperor Kangxi of Qing Dynasty when he visited Wutaishan in year 1714. It was supported by 4 pillars and has three layers on top with three entrances. The four Chinese characters 灵峰仙境 (meaning the fairy site at Lingjiu Peak)inscribed at the central was written by The Emperor. When we stand below the Gateway, the enclosed scenic sights and the magnificent undulating view of the close and distance mountainous region are under our bird eye view.