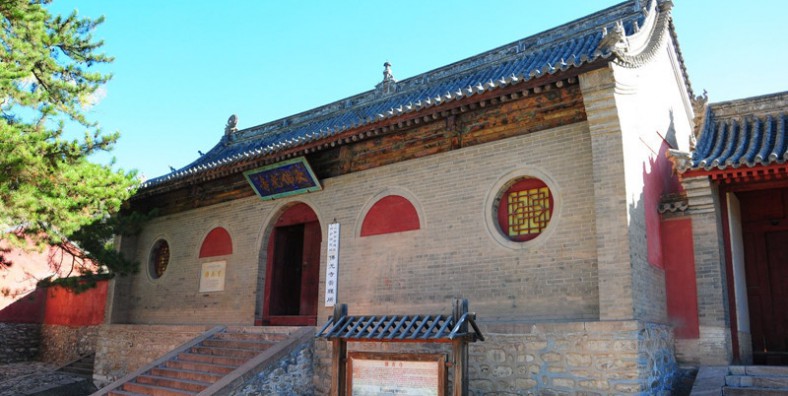 Inscribed on the UNESCO World Heritage List as part of the Mount Wutai ensemble in 2009, Foguang Temple is one of the finest examples of Tang Dynasty architecture remaining today.

Foguang Temple (Chinese: 佛光寺) is a Buddhist temple located five kilometres from Doucun, Wutai County, Shanxi Province of China. The major hall of the temple is the Great East Hall, built in 857 AD, during the Tang Dynasty (618–907). According to architectural records, it is the third earliest preserved timber structure in China. It was rediscovered by the 20th-century architectural historian Liang Sicheng (1901–1972) in 1937, while an older hall at Nanchan Temple was discovered by the same team a year later. The temple also contains another significant hall dating from 1137 called the Manjusri Hall. In addition, the second oldest existing pagoda in China (after the Songyue Pagoda), dating from the 6th century, is located in the temple grounds. Today the temple is part of a UNESCO World Heritage site and is undergoing restoration.

The temple was established in the fifth century during the Northern Wei dynasty. From the years of 785 to 820, the temple underwent an active building period when a three level, 32 m tall pavilion was built. In 845, Emperor Wuzong banned Buddhism in China. As part of the persecution, Foguang temple was burned to the ground, with only the Zushi pagoda surviving from the temple’s early history. Twelve years later in 857 the temple was rebuilt, with the Great East Hall being built on the former site of a three storey pavilion. A woman named Ning Gongyu provided most of the funds needed to construct the hall, and its construction was led by a monk named Yuancheng. In the 10th century, a depiction of Foguang Temple was painted in cave 61 of the Mogao Grottoes. However, it is likely the painters had never seen the temple, because the main hall in the painting is a two-storied white building with a green-glaze roof, very different from the red and white of the Great East Hall. This painting indicates that Foguang Temple was an important stop for Buddhist pilgrims. In 1137 of the Jin dynasty, the Manjusri Hall was constructed on the temple’s north side, along with another hall dedicated to Samantabhadra, which was burnt down in the Qing Dynasty (1644-1912).

In 1930, the Society for Research in Chinese Architecture began a search in China for ancient buildings. In the seventh year of the society’s search in 1937, an architectural team led by Liang Sicheng discovered that Foguang Temple was a relic of the Tang Dynasty. Liang was able to date the building after his wife found an inscription on one of the rafters. The date’s accuracy was confirmed by Liang’s study of the building which matched with known information about Tang buildings.

Dating from 857 of the Tang Dynasty, the Great East Hall (东大殿) is the third oldest dated wooden building in China after the main hall of the Nanchan Temple dated to 782, and the main hall of the Five Dragons Temple, dated to 831, and the largest of the three. The hall is located on the far east side of the temple, atop a large stone platform. It is a single storey structure measuring seven bays by four or 34 by 17.7 metres (110 by 58 ft), and is supported by inner and outer sets of columns. On top of each column is a complicated set of brackets containing seven different bracket types that are one-second as high as the column itself. Supporting the roof of the hall, each of the bracket sets are connected by crescent shaped crossbeams, which create an inner ring above the inner set of columns and an outer ring above the outer columns. The hall has a lattice ceiling that conceals much of the roof frame from view. The hipped-roof and the extremely complex bracket sets are testament to the Great East Hall’s importance as a structure during the Tang Dynasty. According to the 11th-century architectural treatise, Yingzao Fashi, the Great East Hall closely corresponds to a seventh rank building in a system of eight ranks. The high rank of the Great East Hall indicates that even in the Tang Dynasty it was an important building, and no other buildings from the period with such a high rank survive.

On the north side of the temple courtyard is the Manjusri Hall (文殊殿). It was constructed in 1137 during the Jin dynasty and is roughly the same size as the East Hall, also measuring seven bays by four. It is located on an 83 cm (2.7 ft) high platform, has three front doors and one central back door, and features a single-eave hip gable roof. The interior of the hall has only four support pillars. In order to support the large roof, diagonal beams are used. On each of the four walls are murals of arhats painted in 1429 during the Ming dynasty.

The Zushi Pagoda (祖师塔), is a small funerary pagoda located to the south of the Great East Hall. While it is unclear as to the exact date of its construction, it was either built during the Northern Wei Dynasty (386-534) or Northern Qi Dynasty (550-577) and possibly contains the tomb of the founder of the Foguang Temple. It is a white, hexagonal shaped 6 metres (20 ft) tall pagoda. The first storey of the pagoda has a hexagonal chamber, while the second storey is purely decorative. The pagoda is decorated with lotus petals and the steeple supports a precious bottle in the shape of a flower.

How to Get to Foguang Temple

If you want to get rid of hustle of transportation and troublesome navigation, you can book a private tour package which covers visiting, dining and transfer from us. Our local tour guide and driver will escort you to Foguang Temple with speed and convenience, and take care of all the details. You just need to focus on travel.

Mount Wutai has the longest and most prestigious history among the four famous Buddhist Mountains in China. It was enrolled as a World Heritage Site by the UNESCO in 2009. Mount Wutai is one of the four mountains of China sacred to Buddhism. It has the distinction of having been identified as the most prestigious and oldest one. This identification stems from a passage in a holy Buddhist text (a sutra), in which is described the abodes of the bodhisattvas holy to Buddhism (a bodhisattva is one who has devoted himself to becoming enlightened, or in reaching nirvana).

Nanchan Temple (Chinese: 南禪寺; pinyin: Nánchán Sì) is a Buddhist temple located near the town of Doucun on Wutaishan, Shanxi Province, China. Nanchan Temple was built in 782 during China’s Tang dynasty, and its Great Buddha Hall is currently China’s oldest preserved timber building extant, as wooden buildings are often prone to fire and various destructions. Not only is Nanchan Temple an important architectural site, but it also contains an original set of artistically-important Tang sculptures dating from the period of its construction. Seventeen sculptures share the hall’s interior space with a small stone pagoda.

Shuxiang Temple (殊像寺), located in southwestern of Taihuai town in Mount Wutai, Shanxi Province, China. Shuxiang Temple is one of the National Key Buddhist Temples in Han Chinese Area. It is also listed in Major Historical and Cultural Sites Protected in Shanxi Province, China. The name of the temple comes from the fact that it was built for worshiping Manjushri. There is a color statue of Manjushri riding suan ni (a son of a dragon, with a lion’s appearance) within the Manjushri Hall in Shuxiang Temple. With a height of 9.87 metres, it is the highest Manjusri Statue in all the Mount Wutai temples. On the walls of the hall, there are sculpting paintings which inscribe the story of five hundred Arhats crossing the river. In front of the entrance of Shuxiang Temple, there is a clean spring, known as “Prajna Spring”, which does not freeze in winter.

As Foguang Temple is a cultural, it is attractive all year around.

The ticket for Foguang Temple is 15 Yuan per person.