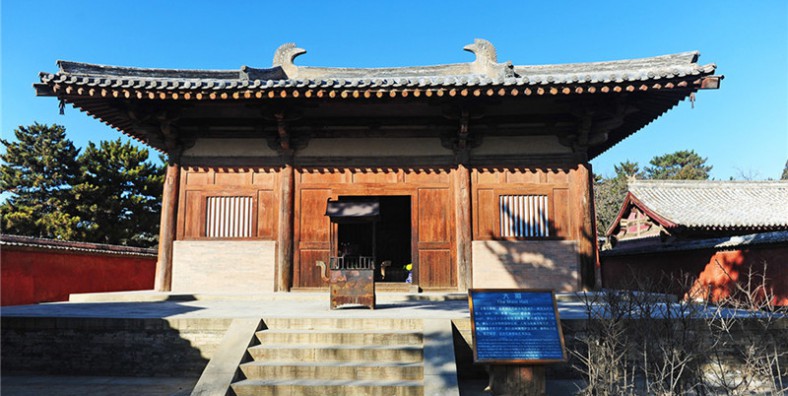 Why is Nanchan Temple in Mount Wutai is so special?

The earliest wooden building that still exists in China

Nanchan Temple (南禅寺) that stands today is the earliest wooden building that still exists in China It is located at Lijiazhuang, a village 22 kilometers southeast of Wutai in North China’s Shanxi province. The Great Buddha Hall of Nanchan Temple is a prayer hall that has been preserved in the temple, is currently China’s oldest preserved timber building extant, as wooden buildings are often prone to fire and various destruction.

Where is Nanchan Temple?

Nanchan Temple is located at Lijiazhuang (李家庄), a village 22 kilometers southeast of Wutai in North China’s Shanxi province. The temple is about 130 km from Taiyuan (太原), the capital of Shanxi province, and about 60 km from Xinzhou (忻州).

If you want to get rid of hustle of transportation and troublesome navigation, you can book a private tour package which covers visiting, dining and transfer from us. Our local tour guide and driver will escort you to Nanchan Temple with speed and convenience, and take care of all the details. You just need to focus on travel.

History and Cultural of Nanchan Temple

It is unknown when the temple was initially built, as it was rebuilt in the third year of the Jianzhong period of the Tang Dynasty (AD 782). After several repairs during the Song (AD 420-479), Ming (AD 1368-1644) and Qing (AD 1644-1911) dynasties, it received a grand renovation in 1973 and was restored to its original splendor as a typical Tang-style temple. In the 1950s the building was rediscovered by architectural historians, and in 1961 it was recognized as China’s oldest standing timber-frame building. Just five years later in 1966, the building was damaged in an earthquake, and during the renovation period in the 1970s, historians got a chance to study the building piece by piece.

The Layout of the Nanchan Temple

The temple is facing south, and covers an area of 3078 square meters. The temple includes a gate, Hall of the Dragon King (Longwangdian), Hall of Great Buddha (Dafodian), Hall of Bodhisattva (Pusadian), and other fine examples of ancient timber construction. For the Great Buddha Hall, it contains 17 statues that are lined up on an inverted U-shaped dais. The largest statue is of Sakyamuni (Buddha), placed in the center of the hall sitting cross-legged on a Sumeru throne adorned with sculpted images of a lion and demigod. The roof is supported by twelve pillars that are implanted directly into a brick foundation. The hip-gable roof is supported by five-puzuo brackets. The hall does not contain any interior columns or a ceiling, nor are there any struts supporting the roof in between the columns. All of these features indicate that this is a low-status structure. The hall contains several features of Tang Dynasty halls, including its longer central front bay, the use of camel-hump braces, and the presence of a yuetai.

Inscribed on the UNESCO World Heritage List as part of the Mount Wutai ensemble in 2009, Foguang Temple (佛光寺) is one of the finest examples of Tang Dynasty architecture remaining today. The temple is located at five kilometres from Doucun, Wutai County, Shanxi Province of China.

Mount Wutai (五台山), also known by its Chinese name Wutaishan and as Mount Qingliang, is a sacred Buddhist site at the headwaters of the Qingshui in Shanxi Province, China. Its central area is surrounded by a cluster of flat-topped peaks roughly corresponding to the cardinal directions. The north peak (Beitai Ding or Yedou Feng) is the highest (3,061 m or 10,043 ft) and is also the highest point in northern China.

Shuxiang Temple (殊像寺), located in southwestern of Taihuai town in Mount Wutai, Shanxi Province, China. Shuxiang Temple is one of the National Key Buddhist Temples in Han Chinese Area. It is also listed in Major Historical and Cultural Sites Protected in Shanxi Province, China. The name of the temple comes from the fact that it was built for worshiping Manjushri. There is a color statue of Manjushri riding suan ni (a son of a dragon, with a lion’s appearance) within the Manjushri Hall in Shuxiang Temple. With a height of 9.87 metres, it is the highest Manjusri Statue in all the Mount Wutai temples. On the walls of the hall, there are sculpting paintings which inscribe the story of five hundred Arhats crossing the river. In front of the entrance of Shuxiang Temple, there is a clean spring, known as “Prajna Spring”, which does not freeze in winter.

Before visit a Buddhist temple,  it would be better for you to do some research about Buddhism, and Chinese architecture, so that you can get a better travel experience in Nanchan Temple. What’s more, it’s necessary for you to know some Buddhist taboos and customs before your tour. Our top recommended is travel with a local tourist.