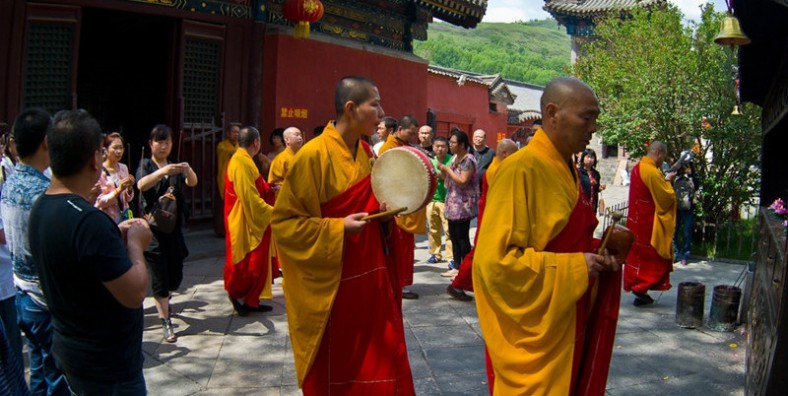 Why is Shuxiang Temple in Mount Wutai is so special?

Shuxiang Temple is one of the National Key Buddhist Temples in Han Chinese Area. It is also listed in Major Historical and Cultural Sites Protected in Shanxi Province, China. It was named for the worship of Manjusri Bodhisattva in the temple.

Where is Shuxiang Temple?

If you want to get rid of hustle of transportation and troublesome navigation, you can book a private tour package which covers visiting, dining and transfer from us. Our local tour guide and driver will escort you to Shuxiang Temple with speed and convenience, and take care of all the details. You just need to focus on travel.

History and Cultural of Shuxiang Temple

Shuxiang Temple was built in the early years of the Eastern Jin Dynasty. It was rebuilt many times in the Ming Dynasty, and it was called the Wutai Mountain “Five Zen Place” together with Xiantong Temple, Tayuan Temple, Bodhisattva, and Luohou Temple. The temple covers 6,400 square meters (7,654.6 square yards), and encompasses over 50 palaces and halls. The name of the temple comes from the fact that it was built for worshiping Manjushri. There is a color statue of Manjushri riding suan ni (a son of a dragon, with a lion’s appearance) within the Manjushri Hall in Shuxiang Temple. With a height of 9.87 metres, it is the highest Manjusri Statue in all the Mount Wutai temples. On the walls of the hall, there are sculpting paintings which inscribe the story of five hundred Arhats crossing the river. In front of the entrance of Shuxiang Temple, there is a clean spring, known as “Prajna Spring”, which does not freeze in winter.

In the Manjushri Hall, tourists can find the famous  Manjusri Statue, With a height of 9.87 metres, it is the highest Manjusri Statue in all the Mount Wutai temples. And tourists can also find the statues of Five hundred Arhats in the hall too, which unveiled the mysterious ancient India Buddhist world.

When visiting Shuxiang Temple, don’t forget to visit the “Prajna Spring” at the gate. “Prajna Spring” means “the spring of wisdom” in Sanskrit. It is said that drinking the spring water here can help grow wisdom and get rid of folly. When the emperors of the Qing Dynasty came to Wutai Mountain to worship the Buddha on the mountain, they would also drink the spring water.

According to legend, during the Qing Dynasty, a princesses came to live in the room, and renamed it as Shanjing Room, which means a quiet room, as a place for learn about Buddhism. Then the whole temple was destroied by a fire, the only remain is the room, so the local people said that this is the bless of Manjusri.

Mount Wutai has the longest and most prestigious history among the four famous Buddhist Mountains in China. It was enrolled as a World Heritage Site by the UNESCO in 2009. Mount Wutai is one of the four mountains of China sacred to Buddhism. It has the distinction of having been identified as the most prestigious and oldest one. This identification stems from a passage in a holy Buddhist text (a sutra), in which is described the abodes of the bodhisattvas holy to Buddhism (a bodhisattva is one who has devoted himself to becoming enlightened, or in reaching nirvana).

Nanchan Temple (Chinese: 南禪寺; pinyin: Nánchán Sì) is a Buddhist temple located near the town of Doucun on Wutaishan, Shanxi Province, China. Nanchan Temple was built in 782 during China’s Tang dynasty, and its Great Buddha Hall is currently China’s oldest preserved timber building extant, as wooden buildings are often prone to fire and various destructions. Not only is Nanchan Temple an important architectural site, but it also contains an original set of artistically-important Tang sculptures dating from the period of its construction. Seventeen sculptures share the hall’s interior space with a small stone pagoda.

Inscribed on the UNESCO World Heritage List as part of the Mount Wutai ensemble in 2009, Foguang Temple (佛光寺) is one of the finest examples of Tang Dynasty architecture remaining today. The temple is located at five kilometres from Doucun, Wutai County, Shanxi Province of China.

For the tickets, it is included in the fee of Wutai Mountain Scenic Area, 135 CNY for adult, 70 CNY for child and student.

Before visit a Buddhist temple,  it would be better for you to do some research about Buddhism, and Chinese architecture, so that you can get a better travel experience in Nanchan Temple. What’s more, it’s necessary for you to know some Buddhist taboos and customs before your tour. Our top recommended is travel with a local tourist.