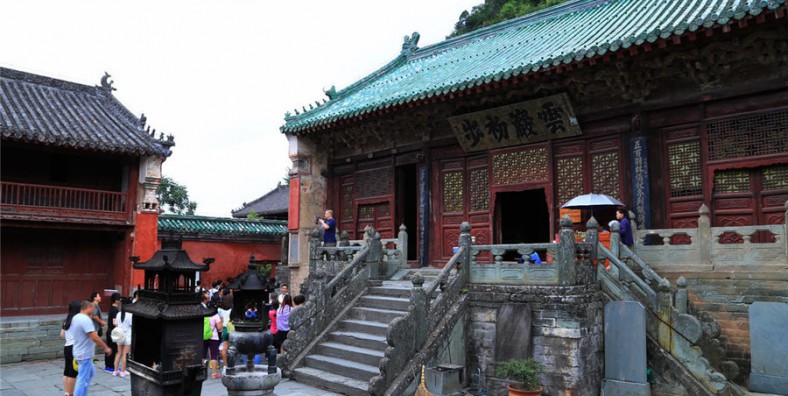 According to the view of restoration, this ancient building on the 60-degree steep slope of Shizi Peak in Wudang Mountain has been praised by modern architects as a classic work of building on steep slopes.

Why is Prince Slope So Special?

According to the view of restoration, this ancient building on the 60-degree steep slope of Shizi Peak in Wudang Mountain has been praised by modern architects as a classic work of building on steep slopes. On the back of the mountain lion lies the view of restoration, on the right there is the Tianchi waterfall, on the left there are 18 plank roads, on the far side it looks like lotus in the water, on the near side it looks like a splendid city. The ancient masters of architecture not only created an area of 16,000 square meters but also built more than 200 halls by skillfully using the mountain terrain.

Where is Prince Slope

In the northwest of Hubei province of Tourism Special Economic Zone in Shiyan City.

During the reign of Kangxi in Qing Dynasty, it was repaired three times. In the 20th to 26th years of Ganlong’s reign in the Qing Dynasty, the main hall, the mountain gate and other halls were rebuilt. Due to disrepair, the damage was serious.

In 1982, the state invested in a comprehensive renovation of the concept of restoration and restored its true colors. It was included in the provincial and national key cultural relics protection units.

The ancient building complex in Prince Slope was designed according to the story of Zhenwu cultivation. The ancient building masters skillfully used the mountain terrain to build a wall like undulating waves, known as the Jiuqu Yellow River Wall. Entering Erdaoshan Gate, a broad courtyard suddenly appeared. Walking in, I saw the small courtyard overlapping, quiet and elegant. The overall layout of Prince Slope was uneven, scattered, coordinated and perfect, clever and mysterious. Place oneself in the highest place of the view of restoration of truth, looking down at the deep ravines and streams flowing green; Looking at the mountains, thousands of peaks show up.

The main attractions of this scenic spot include the exquisitely carved well pavilion of the needle grinding well, the Paleozoic marine invertebrate “right angle stone” and the murals of “Zhenwu Xiuzhen”. It is like 18 sets of ancient paths with colorful ribbons fluttering up and down, various strange rocks in Jiudu ravine, jade virtual rocks with steep risks and unique features, and so on.

The best time to pay a visit is in March to May & September to November.

1. Starting from Shiyan: No.202 intercity bus can take tourists from Shiyan Railway Station to the mountain in 70 minutes.
2. From Xi ‘an: There are three direct tour buses to the scenic spot every day. It takes about 4 hours for a coach to leave Xi ‘an coach station opposite Xi ‘an railway station. the fare is CNY 111.5 yuan. The other two long-distance buses depart from coach station at Sanfu bay at 8:00 and 13:00 respectively, which takes about 4.5 hours and costs CNY 159 yuan. They all reached coach station 400 meters (440 yards) west of the entrance to Wudang mountain.
3. Starting from Wuhan: There is a through bus at Jinjiadun bus station, which starts at 13:40 every day. It takes about 6 hours and costs 179 yuan per person