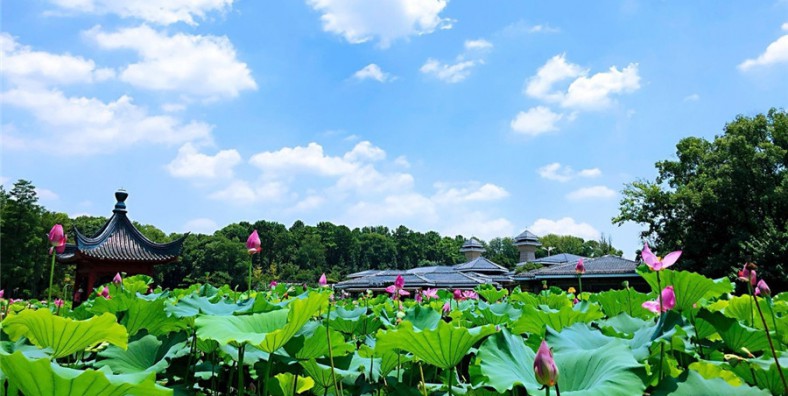 It is a national 5A scenic spot, a national civilized scenic spot demonstration site and the first batch of national key scenic spots. Mao Zedong loved East Lake all his life and called it "the place of white clouds and yellow cranes."

Why is East Lake So Special?

East Lake, the biggest scenery tourist attraction in Wuhan and also the largest lake within a city in China, because of its winding banks and crisscrossing ponds and brooks, it is called ‘a lake with 99 bays’. The East Lake Scenic Area was formed from many famous scenic spots along the bank. The six major ones are Tingtao (Listening to Surging Waves), Mo Hill (Millstone Hill), Luoyan (Diving Wild Goose), Baima (White Horse), Chuidi (Playing Flutes), and Luohong Hills.

Where is East Lake

It is located on the south bank of the Yangtze River and in the east suburb of Wuchang. It covers an area of 87 square kilometers (33 square kilometers of water area) that is five times greater than the area of the West Lake in Hangzhou.

East Lake has been a tourist attraction since ancient times.

During the Three Kingdoms period, Liu Bei set up an altar to worship heaven in Moshan, East Lake. After the founding of the People’s Republic of China, Mao Zedong visited East Lake 44 times and received 94 groups of foreign dignitaries from 64 countries. Zhu De wrote a poem more than 50 years ago: “East Lake temporarily makes West Lake better and will be better than West Lake in the future”. When

Six Major Scenic Spots in East Lake Scenic Area. Among the six scenic areas, Tingtao and Mo Hill scenic areas are the most two notable and are open to visitors.

The lake gate leads to the tingtao scenic spot, where rare redwoods are especially elegant in late autumn. The classic and elegant Tinglang Tower (Tingtao Xuan) is one of the famous buildings in the region, as well as the water and cloud land (Yunshui Lane) as tea houses and Tingtao Restaurant, which provides local fish dishes. In the north, in the center of this area, is the poetry pavilion (xingyin pavilion), which was built to commemorate the works of qu yuan, the great patriotic poet of Chu state. Chu was one of the seven warring states before Qin, China’s first feudal dynasty. There are many exhibits about Qu Yuan in this building, including his great literary masterpiece. In addition, China’s first fable sculpture park displays wonderful sculptures and fables here.

Characterized by beautiful landscape, abundant plants, the customs of the State of Chu and unique gardens, the Mo Hill Scenic Area attracts many tourists. In this area, the Chu cultural theme park displays the Chu culture in China. The Botanical Viewing Garden where more than 360 kinds of plants are nursed in 13 special gardens with flowers blooming all the year round – orchids and cherry blossoms in spring, lotus in summer, osmanthus in autumn, and plum blossoms in winter – is also admirable.

The Other Four Scenic Spots

In addition, the bird forest with 200 species of birds, the mysterious East Lake Ocean Park, the largest bathing beach in inland China, and the friendship forest where representatives of many other cities and local people plant trees symbolizing friendship are all worth visiting.

The best time to pay a visit is in April to October.

The summer when lotus blooms is worth visiting, but Wuhan is very hot in summer.  Early morning, evening or sunset will be the best time for sightseeing and photography.