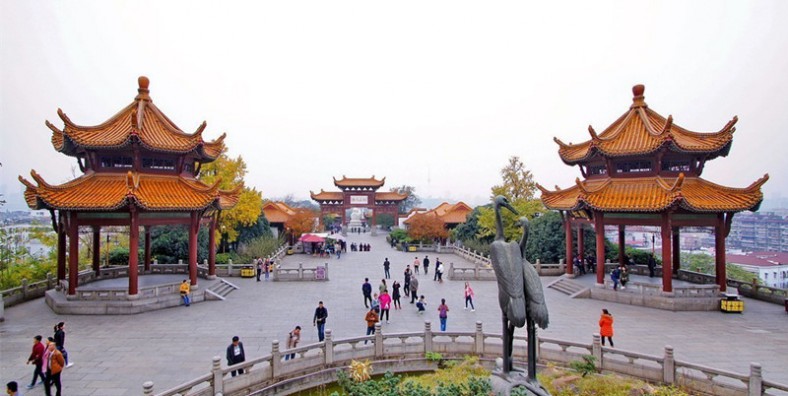 It is a national 5A scenic spot and one of the "three famous buildings in the south of the Yangtze River". Since ancient times, it has enjoyed the reputation of "the first floor in the world" and "the best scenery in the world". Yellow Crane Tower is a landmark building in Wuhan City

Why is Yellow Crane Tower So Special?

Where is Yellow Crane Tower

Yellow Crane Tower is located on Snake Hill in Wuchang, Hubei Province in central China. Together with Yueyang Pavilion in Hunan Province and Tengwang Pavilion in Jiangxi Province, it is praised as one of the Three Most Notable Towers in the south of the Yangtze River.

The Yellow Crane Tower has a long and complicated history. It first appeared in the Three Kingdoms period. Why do you want to build the Yellow Crane Tower? Because of its ideal location, it was built by sun quan (182-252, prince of Wu) as a watchtower for his army. Hundreds of years later, its military function was gradually forgotten, and the tower was mainly appreciated as a picturesque place.

In the Tang Dynasty (618-907), many popular poems were written in praise of the Yellow Crane Tower. It is the poems of the Yellow Crane Tower that make the tower so famous and attract people to visit it. In the following centuries, it was destroyed and rebuilt several times. In the Ming Dynasty (1368-1644) and Qing Dynasty (1644-1911) alone, the tower was destroyed seven times and rebuilt seven times. In 1884, it was completely destroyed in a fire and was not rebuilt until 1981.

In 1981, the Wuhan municipal government decided to rebuild the tower in a new location, which is 1000 meters away from the original historic site. The relocation and reconstruction began in October 1981. The current tower was completed in 1985.

The Story of Yellow Crane Tower

According to legend, the yellow crane tower was built by the family of an old pothole owner named laoxin who lived in Wuhan long ago. One day, a Taoist priest in rags came to the potholes and asked for some wine. Old Xin paid no attention to him, but his son was very kind and gave the Taoist some wine without money. One day, the Taoist priest said to his son, in order to repay his kindness, he wanted to draw a crane on the pit wall, and it would dance at his request. When the people in the city heard the news, they flocked to the potholes to watch the dancing cranes. The Xin family soon became rich. They built the Yellow Crane Tower as a symbol of gratitude to Taoist priests.

The Yellow Crane Tower has different architectural features in different dynasties. However, the tower that stands today was designed based on the Qing Dynasty.

How high is the Yellow Crane Tower? It is as high as 51.4 meters (about 168 feet). No matter from which direction, the appearance of the Yellow Crane Tower is the same. The roof is covered with 100,000 yellow glazed tiles. Each floor of the yellow cornice seems to be designed like a yellow crane spreading its wings and flying.

The Yellow Crane Tower provides a rich landscape for tourists. The exhibition on each floor has a theme. For example, the theme on the first floor is about legends. There is a 9-meter (about 30 feet) long and 6-meter (about 20 feet) wide colored porcelain painting on the wall, which depicts clouds, rivers and cranes and represents the romantic atmosphere of heaven. The third floor master will display poems praising the tower from different dynasties. At the top of the tower, tourists can enjoy the spectacular panorama of the Yangtze River, the Yangtze River Bridge and the buildings around Wuhan. Outside the Yellow Crane Tower, there are bronze Yellow Crane Tower, memorial hall and pavilions.

The best time to pay a visit is in March to May, September to early November.

One thought on “Yellow Crane Tower in Wuhan”