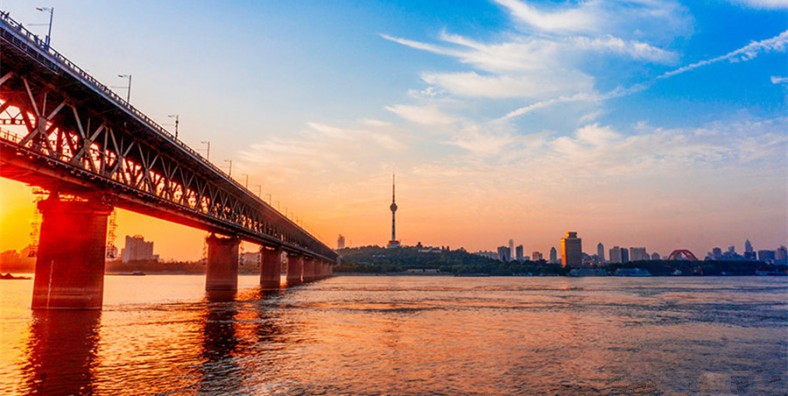 The Wuhan Yangtze Great Bridge (武汉长江大桥), commonly known as Wuhan First Yangtze Bridge, is a double-deck road and rail bridge across the Yangtze River in Wuhan, in Central China. At its completion in 1957, the bridge was the easternmost crossing of the Yangtze, and was often referred to as the “First Bridge of the Yangtze(万里长江第一桥)”.

The bridge extends 1.6 kilometers (1 mile) from Turtle Hill in Hanyang(汉阳区龟山), on the northern bank of the Yangtze, to Snake Hill in Wuchang(武昌区蛇山), on the southern bank of the Yangtze. Plans for the bridge’s construction were first made in 1910. A total of four exploratory surveys were made between 1913 and 1948 to identify a suitable site, but economic limitations and the combination of World War II and the Chinese Civil War prevented the bridge’s building until the 1950s. Actual construction began in September 1955 and was completed in October 1957.
The upper level of the bridge is a two-way, four-lane automobile highway. The lower level is a double-track railway on the Beijing-Guangzhou railway line.

The main bridge of Wuhan Yangtze River Bridge is in the form of steel truss, while the approach bridge body is in the form of arch. The steel frame is in sharp contrast in form and material. At the same time, the arch structure is widely used in ancient bridges in China. It is easy to arouse people’s recognition for such design.

The fence decorative patterns on both sides of Wuhan Yangtze River Bridge are all made of flowers, birds, insects, fish, animals and plants. They are vivid and lifelike. They are modeled by paper-cutting techniques, thus forming a beautiful and harmonious cast iron artwork.

There are two magnificent bridgeheads at both ends of the main bridge. There are meaningful paper-cut patterns on both sides of the bridgehead. Each paper-cut carving pattern has clouds, pillars, small lanterns, which constitute a beautiful picture. The beautiful and harmonious Chinese arts and crafts bring people unlimited aesthetic feeling and reverie.

On March 17, 2018, in order to welcome the 7th World Military Games, Wuhan Yangtze River Bridge carried out the 7th Street lamp lighting replacement project. All 72 sets of LED cold light street lamps were replaced with 250W high-quality warm light street lamps. After the replacement, the lighting of the main bridge and approach bridge of Wuhan Yangtze River Bridge were completely unified, with a brand-new appearance.

How to Get to Wuhan Yangtze River Bridge

If you want to get rid of hustle of transportation and troublesome navigation, you can book a private tour package which covers visiting, dining and transfer from us. Our local tour guide and driver will escort you to Wuhan Yangtze River Bridge with speed and convenience, and take care of all the details. You just need to focus on travel.

For Independent travelers you can get there

Yellow Crane Tower (黄鹤楼) is a traditional Chinese tower located in Wuhan. The current structure was built in 1981, but the tower has existed in various forms since not later than AD 223. The current Yellow Crane Tower is 51.4 m (169 ft) high and covers an area of 3,219 m2 (34,650 sq ft). It situated on Snake Hill (蛇山), one kilometer away from the original site, on the banks of the Yangtze River in Wuchang District.

Founded in 1893,  Wuhan University (武汉大学) is one of the most prestigious and selective universities in China, which has been selected as a Chinese Ministry of Education Class A Double First Class University. Wuhan university is located at Luojia Hill, with palatial buildings blending Chinese and Western styles. It is regarded by many as one of the most beautiful campuses in China.
The university has rolling physical features with the scenic Luojia Hill and the beautiful East Lake. Its campus is heavily wooded and green, with fragrant flowers everywhere year-round. Wuhan University is widely known as one of the most beautiful universities in China, especially for its cherry blossom garden. A cherry blossom festival is held every spring.

Turtle Hill(龟山,Guishan) is located in Wuhan City, Hubei Province, China. In ancient times, this mountain was called Yijishan(翼际山). Located in the north of Hanyang(汉阳), Wuhan City, is one of the three mountains with most scenic spots and historic sites. Turtle Hill Scenic Area is a famous tourist attraction in Wuhan. For Turtle Hill, in front of it, lies Yangtze river, with Hanshui(汉水) in the north, Yuehu Lake(月湖) in the West and Lianhua Lake(莲花湖) in the south.

Spring and autumn are the best seasons for traveling, it’s neither too cold nor too hot. Winter is also good, for the rare snow scenery. In spring, you can enjoy the cherry blossom in Wuhan City.