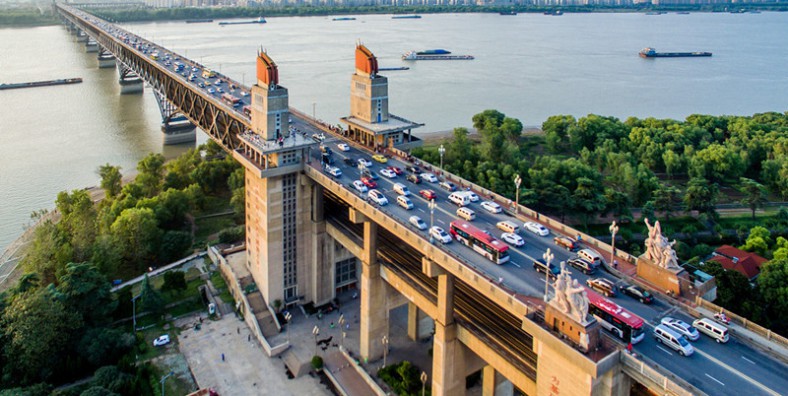 The Nanjing Yangtze River Bridge is China’s first self-designed road and rail truss bridge constructed by the nation.
The Nanjing Yangtze River Bridge (南京长江大桥) is a double-decked road-rail truss bridge across the Yangtze River between Pukou(浦口) and Xiaguan(下关) in Nanjing, China. Its upper deck is part of China National Highway 104, spanning 4,588 metres (15,052 ft). Its lower deck, with a double-track railway, is 6,772 metres (22,218 ft) long, and completes the Beijing-Shanghai Railway, which had been divided by the Yangtze for decades. Its right bridge consists of nine piers, with the maximum span of 160 metres (525 ft) and the total length of 1,576 metres (5,171 ft). The bridge carries approximately 80,000 vehicles and 190 trains per day.
The bridge was completed and open for traffic in 1968. It was the third bridge over the Yangtze after the Wuhan Yangtze River Bridge (武汉长江大桥)and the Chongqing Baishatuo Yangtze River Bridge(白沙沱长江大桥). It was the first heavy bridge designed and built using Chinese expertise.

Why Nanjing Yangtze River Bridge is so special?

The Nanjing Yangtze River Bridge at night is extremely charming. The illumination of 1,024 floodlights on the banisters, 540 halogen lights on the towers and 150 pairs of lamps of the sidewalks make the bridge look like a pearl string lying on the Yangtze River.

How to Get to Nanjing Yangtze River Bridge

If you want to get rid of hustle of transportation and troublesome navigation, you can book a private tour package which covers visiting, dining and transfer from us. Our local tour guide and driver will escort you to Nanjing Yangtze River Bridge with speed and convenience, and take care of all the details. You just need to focus on travel.

For Independent travelers you can get there

Purple Mountain or Zijin Shan (紫金山), Zhongshan Mountain(钟山), is located on the eastern side of Nanjing in Jiangsu province. Covered by verdant trees, the main peak of Purple Mountain is 448.9 meters above sea level. Its peaks are often found enveloped in mysterious purple and golden clouds at dawn and dusk, hence its name. It is a national 5A tourist scenic spots in Jiangsu, as well as a world cultural heritage. Purple Mountain is not only full of beautiful natural scenery but also rich in cultural.

Linggu Temple (灵谷寺) is located on the south foot of Purple Mountain. Linggu Temple was first built in 515 during the Liang dynasty, it was named Kaishan Temple(开善寺), and was built to commemorate the famous monk Baozhi(宝志禅师). Latter, Zhu Yuanzhang(朱元璋), King of the Ming Dynasty, named it Linggu Temple and call it “the best Buddhist temple in the world”(天下第一禅林).

1. The parks near the bridge

There are two parks near the bridge, one is at north bank and another at south. The north one is Qiaobei Binjiang Ecological Park(桥北滨江生态公园), and the south one is Daqiao Park (大桥公园).