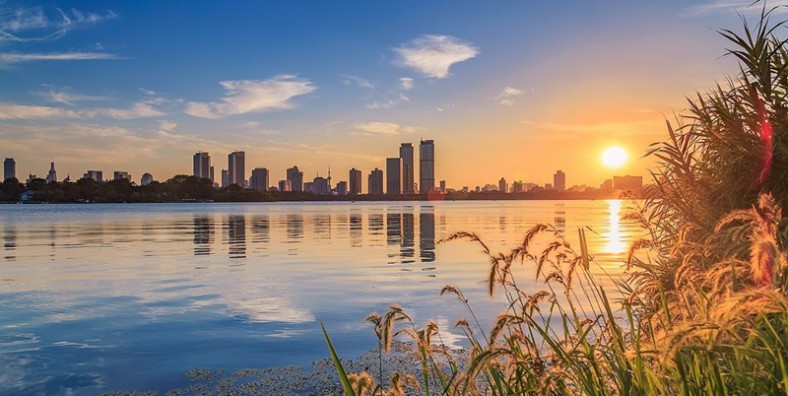 Xuanwu Lake Park is located in Xuanwu District of Nanjing City, with Zijin Mountain in the East and Ming City Wall in the west. It is the largest imperial garden lake in China. It is also the only remaining Imperial Garden and the largest inner-city Park in the south of the Yangtze River. It is known as the Jinling Pearl(金陵明珠) and is now a national key park. The ancient names of Xuanwu Lake are Sangpo(桑泊) and Houhu(后湖), have a history of about 2300 years. The history of the lake can be traced back to the pre-Qin period, it had been the imperial gardens in the Six Dynasties, and the Huangceku(黄册库) in the Ming Dynasty. They were all the imperial gardens. Until the end of the Qing Dynasty, Fengrun Gate (now Xuanwu Gate) was opened, which was the origin of Xuanwu Lake Park.

Inside the park, bridges interconnected the isles, mountains and rivers are everywhere. Xuanwu Lake is a landscape garden, also a cultural resort, literati, poets, dignitaries and celebrities of all dynasties had came here.

The lake is about 368 hectares. There are many fish in the lake and lotus flowers are widely planted. The lake shore is diamond-shaped. It is surrounded by a 10-kilometer road around the lake. There are five isles on the lake. They are Huanzhou isle(环洲), Yingzhou isle(樱洲), Lingzhou isle(菱洲), Liangzhou isle(梁洲) and Cuizhou isle(翠洲), which are connected by bridges.

Yingzhou(樱洲) is named for its numerous cherry trees. Cherry trees are planted all over the isle, as well as more than ten kinds of flowers, such as magnolia, camellia, etc. Every spring, the isle is a sea of flowers.

Liangzhou(梁洲) got its name because it is said that the Prince of Liang once built a “Liangyuan(梁园,Garden Liang)” here. What’s more, the annual Chrysanthemum Exhibition is held here, so it has the reputation of “Liangzhou Qiuju(梁洲秋菊)”. The Lake God Temple(湖神庙), Lansheng Tower(览胜楼), Friendship Hall(友谊厅) and other attractions are gathered here.

Cuizhou(翠洲) is located in the east of Xuanwu Lake with an area of 6.59 hectares. It is called Cuizhou because of there are vast bamboo, deodar on the isle. The scenery of Cuizhou is unique. Pine, cypress, willow and bamboo, formed the scenery of “Cuizhou Yunshu(翠洲云树)”, which is a good place to appreciate the green.

How to Get to Nanjing Xuanwu Lake

If you want to get rid of hustle of transportation and troublesome navigation, you can book a private tour package which covers visiting, dining and transfer from us. Our local tour guide and driver will escort you to Nanjing Xuanwu Lake with speed and convenience, and take care of all the details. You just need to focus on travel.

Nanjing Presidential Palace(南京总统府), located at No. 292 Changjiang Road, Xuanwu District, Nanjing City, Jiangsu Province(江苏省南京市玄武区长江路292号), is the largest and most complete architectural complex in modern China. It is also the important site of modern Chinese history. Now, it has been established as the Museum of Modern Chinese History(中国近代史博物馆).

5 thoughts on “Xuanwu Lake in Nanjing”