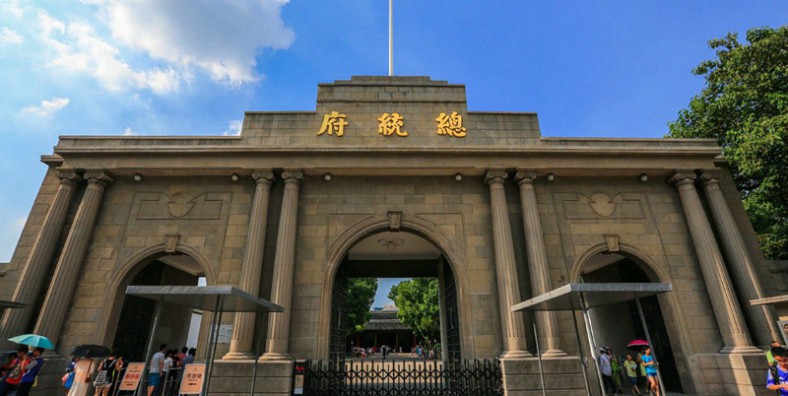 With an area of 90,000 square meters (968,752 square feet), Nanjing Presidential Palace is the largest modern historical museum of China, featuring classical garden architecture clusters of the south of Yangtze River. It is a blend of Western and Chinese architectural styles. The Presidential Palace could be thought of as Nanjing’s version of the Forbidden City in Beijing with it once being home to ancient emperors and later political leaders. The palace was also the base for Dr. Sat Yun Sen.

The Museum of Modern Chinese History(中国近代史博物馆) covers an area of 90,000 square meters and is divided into three visiting areas. The central area (central axis) is mainly the presidential palace and its affiliated institutions; the western area is Sun Yat-sen’s temporary office of the president, the Secretariat and the West Garden, as well as the headquarters of the staff; the eastern area is mainly the old site of the Executive Department, the stables and the East Garden. A series of pavilions and historical records are displayed in these three areas. In March 2003, the construction of the Museum was completed and officially opened to the public.

The Gate Tower is the landmark building of the presidential palace. The Taiping Heavenly Kingdom erected the Heavenly Kingdom Palace in the compound of the former Liangjiang Governorgeneral’s Yamen(两江总督署衙门). The gate of the palace was called“Zhen Shen Rong Guang Men”(真神荣光门,Genius Gate).After the Manchu Troop’s recovery of the Heavenly Capital 1864, it was demolished, and the outer gate of the Liangjiang Governorgeneral’s Yamen was rebuilt. The present Western style reinforced concrete gate tower was built by the Nationalist Government in 1929. Chiang Kai-shek was elected president and organized a presidential Government in May 1948, the president gate tower was renamed the gate Tower of the Presidential Palace.

Main Hall(大堂) is the main building of the Presidential Palace. Here was the“Rong Guang Hall”(荣光大殿, i.e. Hall of Glory) where Hong Xiuquan (洪秀全) held court during the Taiping Heavenly Kingdom period. It was burnt down by Manchu troops after the fall of Tianjing (Nanjing). The present hall was rebuilt by Zheng Goufan(曾国藩) in the reign of Emperor Tongzhi(同治年间). After the victory of the Revolution of 1911, Dr Sun Yat-sen was elected President of the Provisional Government of the Republic of China. The ceremony was held in here. It became the hall of the national government after 1927. In order to commemorate this epoch-making event, Dr Sun Yat-sen wrote four Chinese characters “Tian Xia Wei Gong”(天下为公, i.e. The World Belongs to the people). Now the horizontal inscribed board featuring Dr Sun’s inscription is on the crossbeam of the Hall.

Qilin Gate(麒麟门) gate was originally built for the sake of safety and was destroyed in 1950’，which cut off the path which connected the Main Gate and Zi-Chao Building. There are a pair of stone Chinese Unicorns at each side of the gate.

Zichao building(子超楼) was originally the office building of the Republic National Government It was designed by Yu Binglie (虞炳烈) and constructed by the Lu Chuang Engineering Co(鲁创营造厂). Totally cost 100 thousand silver yuan at that time. In December 1937, Japanese troops occupied Nanjing, the building used by the Japanese army and the puppet governments After the victory of the Anti-Japanese War, the Republic National Government moved from Chongqing to Nanjing in 1946, successively as the national government in the presidential office building in May 1948. The offices of the National Chairman Lin Sen (林森), President Chiang kai-shek, and the secretary-general , as well as state conference hall and so on inside of it.

Xiyuan Garden (煦园) was a private garden of the Governor General of Jiangnan and Jiangxi Provinces in the Qing Dynasty (1644-1911), which was expanded during the Taiping Heavenly Kingdom (1851-1864), and the ‘living room’ of Sun Yat-sen is in the garden. Because the garden is located in the west side of the palace, also known as the “West Garden”, and the East Garden is comparable.

How to Get to Presidential Palace

If you want to get rid of hustle of transportation and troublesome navigation, you can book a private tour package which covers visiting, dining and transfer from us. Our local tour guide and driver will escort you to Presidential Palace with speed and convenience, and take care of all the details. You just need to focus on travel.

Purple Mountain or Zijin Shan, Zhongshan Mountain, is located on the eastern side of Nanjing in Jiangsu province. Covered by verdant trees, the main peak of Purple Mountain is 448.9 meters above sea level. Its peaks are often found enveloped in mysterious purple and golden clouds at dawn and dusk, hence its name. It is a national 5A tourist scenic spots in Jiangsu, as well as a world cultural heritage. Purple Mountain is not only full of beautiful natural scenery but also rich in cultural.

6 thoughts on “Presidential Palace in Nanjing”