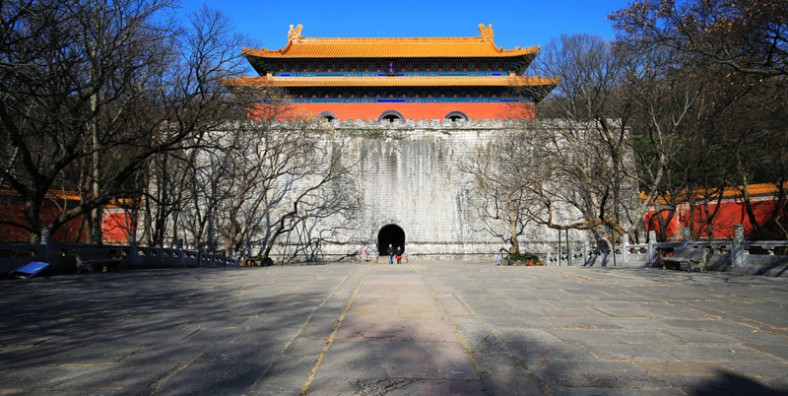 Why is Ming Xiaoling Mausoleum so Special?

Ming Xiaoling is the mausoleum of King Zhu Yuanzhang(朱元璋), the first emperor of Ming dynasty, and Queen Ma(马氏). Ming Xiaoling represents the the highest achievements of Ming architecture and stone carving art. It has a direct impact on the Ming and Qing dynasties imperial mausoleum of more than 500 years, such as the imperial mausoleum in Beijing, Hubei(湖北), Liaoning(辽宁), Hebei(河北) and other places. Ming Xiaolingin has a special position in the development of the mausoleum, it has the reputation of The Best Imperial Mausoleum of the Ming and Qing Dynasties(明清皇家第一陵).

Ming Xiaoling Mausoleum was built in the 14th year of Hongwu(明洪武十四年,1831), and completed in the 3rd year of Yongle(明永乐三年,1405), which took 25 years and about 100,000 workers to complete. According to the Chinese tradition of imperial mausoleum building, Ming Xiaoling perfectly reaches the harmony between nature and humanity, has become an excellent model of the combination of traditional Chinese architectural art culture and environmental aesthetics.

Ming Xiaoling Mausoleum is the tomb of Zhu Yuanzhang, the emperor of the Ming Dynasty, and Empress Ma. Because Empress Ma’s was called “Empress of filial piety(孝慈高皇后)” and because she pursues filial piety(孝, Xiao in Chinese) to govern, so the mausoleum is called “Xiaoling(孝陵)”. What’s more, the mausoleum covers an area of more than 1.7 million square meters and is one of the largest Imperial Mausoleums in China.

The entrance of the mausoleum is Great Golden Gate. The gate is 26.66 meters long, 8.09 meters wide and 5.05 meters high.
Facing south, the gate has three gateways fit with vermilion door pancls. Its stone Xumizuo(须弥座) girdled with floral motifs embodis the creativity in the imperial buildings of the early Ming Dynasty. Its single-eave-and -hip roof(单檐歇山顶) originally covered with yellow glazed tiles was destroyed, while connection to the red outer walls can stell be seen from its west side.

There is abundant rainfall in Nanjing. In order to ensure the safety of the mausoleum, the Ming Xiaoling must have a perfect drainage system.
There are three drainage systems in Xiaoling Mausoleum: the Outer Yuhe Bridge, the Inner Yuhe Bridge and the Baocheng Yuhe Bridge(宝城御河).The Outer Yuhe Bridge is between the Stele Pavilion(碑亭) and the Sacred Way(神道). It is a brick arch bridge. The Inner Yuhe Bridge leading directly to the Mausoleum Palace. It used has five bridges arranged parallelly, so also known as the “Wulong Bridge(五龙桥)”. And the Baocheng Bridge is located at the entrance of Bao Ding Building(宝顶).

The Sacred Way of Xiaoling Mausoleum is 800 meters long and quite spectacular. It stretches from east to northwest, with stone lions on both sides.The lion is the king of all animals, which shows the absolute power of the emperor. It not only symbolizes the imperial power, but also plays the role of avoiding evil.

Bao Ding Building is the upper part of the underground palace where Emperor Zhu Yuanzhang and Empress Ma are buried together, commonly known as Bao Cheng(treasure city, 宝城). Bao Ding is round, about 400 meters in diameter, remained solid and safety till now.

How to Get to Ming Xiaoling Mausoleum

If you want to get rid of hustle of transportation and troublesome navigation, you can book a private tour package which covers visiting, dining and transfer from us. Our local tour guide and driver will escort you to Xiaoling Mausoleum with speed and convenience, and take care of all the details. You just need to focus on travel.

Spring and autumn are the best seasons for traveling, it’s neither too cold nor too hot. In spring, Meihua flower blossoms and the scenery is fascinating. In autumn, the red leaves on Qixia Mountain(栖霞山) are like fire and the forest became red.

The entrance tickets for the Xiaoling Mausoleum is 70 CN￥per person.

One thought on “Ming Xiaoling Mausoleum in Nanjing”