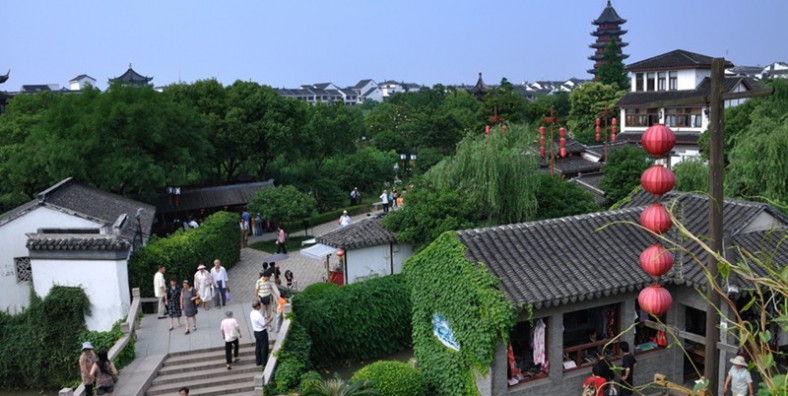 The tower was rebuilt in early summer of 1986. Panmen is the only well-preserved water and land gate in Suzhou ancient city, and it is a national 4A tourist attraction.

Why is Panmen Scenic Area So Special?

It is famous for its numerous historic relics and abundant human landscapes and has been listed as a National AAAA Tourist Area. Now, Panmen Scenic Area has become a tourist resort showing the unique historic and cultural features of Suzhou. The scenery area centered on Panmen City Gate consists of many scenic spots. Amongst them, Ruiguang Pagoda, Panmen City Gate and Wumen Bridge are praised as ‘three fine sceneries’.

Where is Panmen Scenic Area

Lying to the southwest of Suzhou, Jiangsu Province, Panmen Scenic Area was built on the base of some historic sites by using the architectural structure of classical gardens.

Ruiguang Tower is located at the entrance of the scenic spot and is the oldest tower in Suzhou. It is 175.6 feet (53.57 meters) high and is constructed of brick, stone and wood structures with eight sides and seven layers. It is said that the pagoda was built in 247 by sun quan, the famous king who founded the kingdom of Wu during the period of the three kingdoms (220-280) to show his respect for his mother. Unfortunately, in the next thousand years, the pagoda was badly damaged in the war, leaving only its brick body. In 1978, a small pagoda with relics was found on the third floor of Ruiguang Pagoda. Other cultural relics were also found, such as Miaofalian Huajing and bronze Buddha statues written on the Green Paper.

As the center of the scenic area, Panmen City Gate, also known as Pan Men, was founded in the Spring and Autumn Period and Warring States Period (770-476 BC) and is currently the only well-preserved water and land gate in the world. It consists of a land gate, a water gate, a gate tower, a barbican and two side walls. In ancient times, this was the most important place for the army. Shuangshui city gate is a pioneering work in architectural history. There is a gate on the door, which can be closed and opened with a stone gate at any time to control water and resist invasion. There is a tower on the gate. It was destroyed many times in the war. The existing Panmen Tower was built in 1986 to commemorate the 2500 anniversary of Suzhou’s establishment. The first floor of this tower displays many ancient weapons. The wall is 328 yards (300 meters) long and 16 feet (5 meters) high. Walking along the slope to the north of the city wall, you can see the overall layout of the Panmen gate.

Not far from Panmen Gate, tourists can see Wumen Bridge. It was built in 1084 and is now the tallest ancient bridge in Suzhou. The bridge is 36 feet (11 meters) high and 72 yards (66 meters) long. According to records, it was originally composed of three bridges and has been repaired many times in history. In the Qing Dynasty (1644-1911), it was rebuilt into an arched stone bridge. The bridge has 50 steps on each side. Standing on the bridge, you can not only see the ships coming and going on the river, but also see the tall towers and beautiful scenery in the distance.

Besides the three fine sceneries, there are many other scenic spots to see around here, such as Premier Wu Zixu’s Memorial Temple, Hall of Sirui, Double-Pavilion Corridor Bridge and Century Bell of Tang.

After enjoying the scenic spots, you will be satisfied with Chinese traditional activities, including bell ringing, boating and acrobatics. In addition, the traditional wedding performance is also very interesting.

March-April and September-October are the best travel times in Panmen Scenic Area.