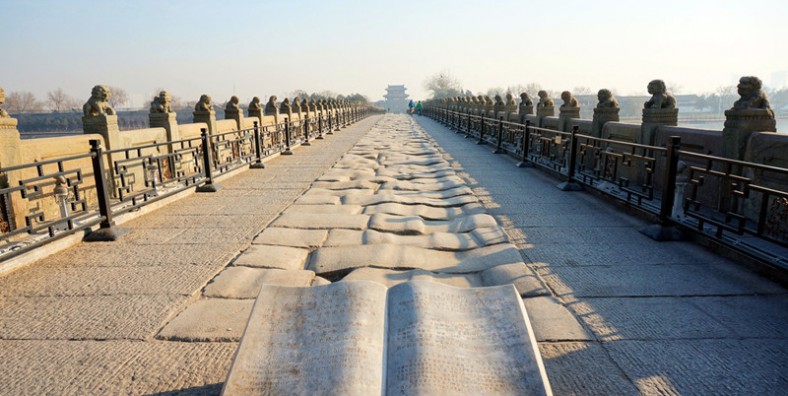 The Lugou Bridge, also known as the Marco Polo Bridge, is a famous stone bridge located 15 km southwest of the Beijing city center across the Yongding River. Situated at the eastern end of the bridge is the Wanping Fortress, a historic 17th century fortress.

Why is Lugou Qiao so Special?

Marco Polo Bridge, also known as the Lugou Bridge, is reputed for countless finely carved lions on the railings on both sides. It was described by the famous Italian traveler Marco Polo as a stunning bridge in his book, hence the name. This historic structure that crosses the Yongding River is situated 9 miles (15km) southwest of Tiananmen, the center of Beijing.

Located 15 km southwest of Tiananmen Square, over the Youngding River, the Lugou Bridge (Marco Polo Bridge, the bridge was so named and known to the west owing to the description of the famous Italian explorer Marco Polo) is the oldest existing multi-arched stone bridge in the Beijing area. Construction of the original bridge on this site commenced in 1189 and ended in 1192 and was later reconstructed in 1698.

Construction of the original bridge on this site commenced in 1189, the final year of Emperor Shizong of Jin’s reign and was completed under his successor in 1192. Following damage from the flooding Yongding, the bridge was reconstructed under the Kangxi Emperor of the Qing dynasty in 1698. The Marco Polo Bridge is well-known because it was highly praised by the Venetian traveler Marco Polo during his visit to China in the 13th century (leading the bridge to become known in Europe simply as the Marco Polo Bridge), and for the 20th century Marco Polo Bridge Incident, which marked the beginning of the Second Sino-Japanese War (1937–1945).

Following the Communist takeover of China in 1949, the bridge was decked in asphalt and carried motor vehicular traffic. To alleviate traffic on the bridge, the New Marco Polo Bridge located about 1 km to the south was completed in 1971. Later, due to the cultural and historical significance of the old bridge, it was decided that the old bridge be preserved, and another new bridge was to be built to take over the vehicular traffic.

The Lugou Bridge is 266.5 meters in length and 9.3 meters in width, supported on 11 piers. At the side of the bridge stand two steles. One carries the inscription about the rebuilding of the bridge in the 37th years of the reign of Emperor Kangxi, Qing dynasty (1698 AD). On the other stele one sees the calligraphy means “the morning moon of Lugou” by Emperor Qianlong. On each of the 281 white marble pillars stands a stone lion. The most intriguing feature of these beasts is the fact that there are more lions hiding on the head, back or under the belly or on paws of each of the big lions.
Investigations to determine total number of animals have been carried out on several occasions but the results have proved inconsistent, ranging anywhere from 482 to 496. However, record has it that there were originally 627 lions. The posture of lion varies, as do their ages. Most date from the Ming (1368-1644) and Qing (1644-1911) dynasties, some are from the earlier Yuan Dynasty (1271-1368); while the few lions dating from as long ago as the Jin Dynasty (1115-1234) are now quite rare.

How to Get to Lugou Qiao

If you want to get out of the traffic and hassle of navigation, you can book a private tour package that includes visiting, dining and transfer from us. Our local guide and driver will escort you to Lugou Qiao in Beijing in the fastest and most convenient way and take care of all the details. You just have to focus on the visiting.