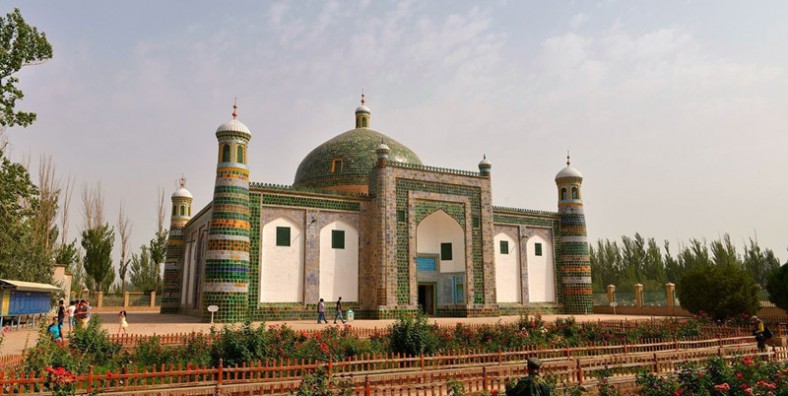 The present mausoleum was rebuilt in 1985. On the east side of the mausoleum is a mosque for Islamic tourists and nearby villagers to pray.

Why is Mahmud Kashgari Mazar So Special?

the Mazar is the tomb of Mahmud Kashgri, who is an outstanding scholar of the Karahanid Dynasty in the 11th century and is the author of the philological magnum opus “The Complete Turkish Dictionary”. The Mazar underwent a reconstruction in 1985. Its girders are carved and painted fine. It consists of two parts: the prayer hall in the front and the tomb hall and memorial hall in the north. The Mazar is respected and admired deeply by Xinjiang people. It is listed as a major cultural site protected by the Autonomous Region.

Where is Mahmud Kashgari Mazar

Mohammad Kashgari was born in 1008 and died in 1105. He is a famous linguist of Uygur nationality in China in the 11th century. After a long period of investigation and study, he wrote the first Turkish Dictionary in Arabic in 1076. This monumental work has a strict structure, clear items and a very rich vocabulary. It can be called an encyclopedia of Turkic nations. It is of great value in studying the history, geography, folk customs, social life, literature and art of Central Asian countries. It also provides valuable information for studying the history, geography, products and folk customs of Turkic tribes.

From Shufu County to the southwest, we drove along the 314 national highway. After crossing a vast gobi, we came to the oasis town of Upal. The present mausoleum was rebuilt in 1985. There is a mosque to the east of the mausoleum for Islamic tourists and nearby villagers to pray. On the north side of the mausoleum is a cultural relic exhibition room, which displays the “Turkic Dictionary” and the biography of Mohammad Kashgari and other related books and materials.
In addition, there is a clear spring directly in front of the tomb, which is called “holy water of holy spring”. There is a clump of ancient poplars beside the spring. Its trunk is old and vigorous, with numerous branches and luxuriant foliage. It is a big attraction.