Ruins of Laining City in Kashgar 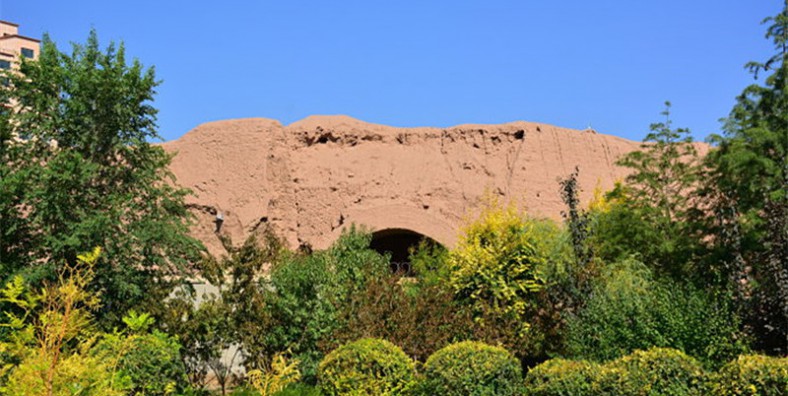 In 1794, some shops were built outside the city. The Laining City was destroyed in Zhang Geer’s rebellion in 1826.

Why is Ruins of Laining City So Special?

Now only south gate, north and southwest city walls, and barbican entrance in the south gate have been remained. In 1762, after putting down the “elder and younger Khoja’s rebellion”, the Qing government established the Kashgar Councillor Minister Government Office in the northwest of the old city of Kashgar to control the eight cities in southern Xinjiang. Inside it there are government office and barracks.

Where is Ruins of Laining City

Ruins of Laining City is located in the court of the Public Security Office of the Prefecture.

In July 1826, Zhang Geer launched a large-scale armed invasion and captured the old city of Kashgar. Minister of Counsellor Kashgar Qing Xiang led the remnant troops and 1,000 Han businessmen from yujiang county, Zhejiang, Hunan, Sichuan, Shaanxi and Gansu to retreat to Leining City, defeating over 3,000 invading troops and killing 800 enemies in the first battle. Zhang Geer ordered people to dam and intercept the lower reaches of the Kizil River in order to raise the water level and flood Leining City. At this critical juncture, Huang Dingxiang (1801-1826), an ordinary Qing soldier from Changsha, Hunan Province, swam with all his might, digging through the dam soil from the bottom of the water. The water level plummeted and the city was saved. After Huang Dingxiang’s heroic sacrifice, the people of all ethnic groups honored him as “Fang Shen” (the god who protects the four sides). More than 10 counties in Xinjiang built Fang Shen temples for him. The people and local officials went to the temples to offer incense at the beginning of each month and on the 15th of each month until the end of the Republic of China. On September 28, 1826, Leining City was captured by Nugget Road in Zhang Geer. Qingxiang committed suicide and died for his country. Most of Leining City was destroyed by the war.

In the south of the city there are set up a drill ground, general platform, and Guandi temple. In 1771, the Emperor Gaozong of the Qing Dynasty granted in due form its name “Laining City”, while the local people customarily called it “New City” or “Man City”. In 1794, some shops were built outside the city. The Laining City was destroyed in Zhang Geer’s rebellion in 1826.