Why is Lijiang Ancient Town So Special?

The beauty of the Old City is also due to the integrity of geographical nature and harmony. In 30 km northwest to the Old City lies the unconquerable Yulong Snow Mountain of 5,596 m and the relics of glacier in the Quaternary Period. The spring is divided into three branches to flow into the Old City relatively from east, middle and west. The countless small branches are threading among the stone-paved lanes, just as the poem describes “spring crossing around each household forms a poem while flying willow before every household draws a painting”. Many architects give highly praise for it and it has gained such a beautiful name as “Suzhou in Highland” and “Eastern Venice”. A great number of travelers are attracted by the beauty and charm of the Old City and the Snow Mountain, keeping pouring and lingering on their primitive simplicity and quietness. And, now, the Lijiang Old City is being reported as one of China Historical Cultural Cities in the whole world’s cultural heritages. Thus, as a bright pearl of our country, it will be more splendid.

Where is Lijiang Old Town?

Lijiang Old Town is located on Yungui Plateau, at an altitude of 2400 meters. This ancient town is adjacent to Jade Dragon Snow Mountain. It faces Elephant Hill and Jinghong Hill in the north, Lion Hill in the west and farmer land in the southeast.

Distance from other main attractions in Lijiang

For the location of Lijiang Old Town, it is good to spend half day wandering and exploring in the old town. To get out of Lijiang Old Town, you can use our private service with private guide and car for visiting Shuhe Ancient Town, Baisha Mural Painting and Former Residence of Joseph Rock for half day tour.

How to get to Lijiang Old Town

By Train: Kunming Train Schedule
Take fast trains from Kunming Railway Station. It takes around 7 to 10 hours. Then change bus no. 16 to get off at Qixing Street Station, or bus no. 18 to White Dragon Square Station. It costs around CNY 40 by taxi.

By Air: Kunming Flight Schedule
Take plane from Changshui Airport. It takes around 40mins. Upon arrival, visitors can take airport shuttle bus to reach Lantian Hotel in the downtown area. Bus fare is around CNY 20. It takes around 30 minutes. Then they can walk around 1 kilometer (1,100 yards) to reach there. Or they can take bus no. 27 and get off at Zhongyi Guangchang. If taking a taxi from Lijiang Airport, taxi fare should be around CNY 80 to 100.

By Train:
Take fast trains from Dali Railway Station. Train ticket prices are CNY 34 for a hard seat, CNY 69.5 for a hard sleeper and CNY 104. 5 for a soft sleeper. It takes around 1.5 to 2.5 hours. After arriving, use local public bus to reach the old town. 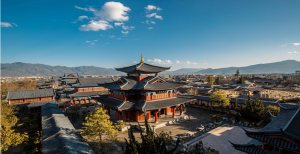 The Old City was firstly built at the very beginning of Yuan Dynasty when the first emperor of Yuan Dynasty, Hu Bilei led his army to be on a southern expedition to Dali and reached Lijiang crossing the Jingsha Rive by the leather bags. And the Old City with a long history of eight or night hundred years can be traced back to South Song Dynasty when it had a certain scale. Since Ming Dynasty, the Old City has been named “Da Yan Xiang” because it is located at the center of Lijiang plain, surrounded by green mountains and threaded with the green rivers, just like a jasper ink slab.

In 1254, Mu ancestors in Lijiang area submitted to the leadership of Hu Bilei, the first emperor of Yuan Dynasty. Then it set up San Dan Administrative official under the submission of Cha Han Zhang administrative official. In 1276, it was switched to Lijiang Administrative Prefecture. In 1382, it set up Lijiang Military Prefecture when the former magistrate of the prefecture Ajia Ade was granted the surname as Mu and the rank as the magistrate of the prefecture of Ming Dynasty in hereditary system by the first emperor of Ming Dynasty, Zhu Yuanzhang. The Old City of Lijiang and the buildings of Military prefecture (The buildings of Mu ancestors) are a symbol of politics, economy and power of the Mu’s family with a distinctive style and imposing manner. The famous traveler in Ming Dynasty, Xu Xiake ever recorded it as “The magnificence of the palace can be compared with the emperor”, and “the people’s residence is scaled closely side by side” when he was passing here, which just truly reflects the prosperity and splendor of the Old City.

What are the features of Lijiang Ancient Town?

An Old Town without Wall:

When visitors walk into Lijiang Old Town, they may find that there is no city wall around it. The reason is related to an interesting story. Lijiang had been ruled by the Hereditary Mu family for more than 500 years. The Chinese character “Mu”(represents the governor of Lijiang) is put into a frame(represents the city wall), “Mu” may change to the character “Kun” that meas “siege” or “predicament”. For a fear that the governor Mu family would be trapped into predicament, the old town never has a city wall. 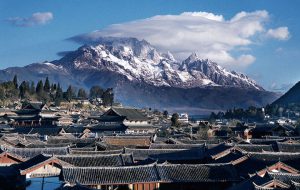 The building history of the Lijiang nationality has experienced from the ancient residence in caves, trees and wood plates houses with courtyard to its own residence model as “three houses with one screen hall facing the gate” and “quadrangle and quin-courtyard with lofts”. The plain of the residence is characterized as the combination of central courtyard and inwards houses. The outer railings (Xia Zi) is also a main part of the residence.

The Naxi nationality keeps absorbing from the outer culture. Lijiang located at the southern Silk Road and the road of tea and horse trade, is the trade distributing center of Yunnan and Xizang province in ancient times. The culture is continuously influenced by the outer factors ranging from inner land culture such as Buddhism, Taoism since the Hu Bilei military forces stationing in 1253 to the later Christianism at the beginning of the 20th century. The culture, while absorbing others, improves itself with its original Dongba Church, Dongba sutra, Dongba pictograph, Dongba paintings and the ancient music known as the heritages from Yuan Dynasty. In the way of incorporating everything of different nature, the Naxi culture really enriches the mystery and connotation of the Lijiang Old City.

Mu’ Residence is a splendid ancient architecture first built in Yuan Dynasty, which not only reflects ancient architectural style in central plains of Ming Dynasty but also remains the lingering charm of Tang and Song Dynasty. Mu’s Residence was called the miniature Forbidden City. Looked from a far distance, it likes a grand imperial palace and it is famous for the grandness and architectural buildings. 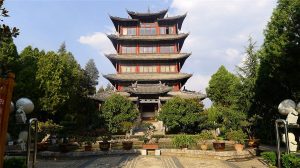 Located on the top of Lion Hill, Wangu Tower is 32.8 meters in height with 123,000 dragon head of Naxi style on the top, which ranks the world’s greatest. Standing on the top of the tower, you can hace panoramic view of the whole Lijiang Old Town and rivers to the east, the Jade Dragon Snow Mountain to the north and Naxi villages to the south, which is magnificent.

Travelers can visit Lijiang Old Town through the South Gate, on the way, you’ll pay visit to Mu’s Residence, Lion Hill and Wangu Tower and wander through the old streets and lanes to enjoy leisure feel of the old town. This may take you half day to explore.

Located in the southern of Lijiang Old Town, the InterContinental Lijiang Ancient Town Resort is the international five-star conference and resort which combines modern luxury, traditional Naxi architectural, and the local representative landscape. Hotel has 274 spacious rooms and suites, 4 restaurants and bars, Spa and Fitness center. It is a 10-minute walk from Sifangjie (Market Square), a 30-minute drive from Lijiang Airport.

Situated in Lijiang, this inn is within a 15-minute walk of Mu Family Mansion, Dayan and Wang Gu Lou. It features a restaurant, a bar/lounge and coffee/tea in a common area. WiFi in public areas is free. Other amenities include dry cleaning, a 24-hour front desk and tour/ticket assistance.

Lijiang International Hotel is located in Lijiang, 400 m from Wangu Pavilion and 600 m from Square Street Dayan Ancient Town. Guests can enjoy the on-site bar. Every room at this hotel is air conditioned and is fitted with a flat-screen TV with satellite channels. You will find a coffee machine in the room. For your comfort, you will find bathrobes and slippers.

When visiting some places in Lijiang, travelers should show the staff the Maintenance tickets. Those places include Lijiang Old Town, Wangu Tower, Mu’s Residence, Shuhe Old Town, Baisha Mural Painting, Black Dragon Pool Park, Jade Dragon Snow Mountain, etc. This ticket is valid for a week when you are in Lijiang.

Naxi Ancient Music is known as a “living fossil of Chinese music”. According to research, this ancient music originated in the 14th century. It originally included three parts, ‘Baisha Fine Music’ (Baisha Xiyue), ‘Dongjing Music’ (Dongjing Yinyue), and ‘Huangjing Music’ (Huangjing Yinyue), however, the last one has long been lost in the river of time. To know more about Naxi, you can spend one night enjoying Naxi ancient music.

Travel light when strolling in the old town. Bring a camera with you that you can take photos along the way. Sunlight is very strong in Lijiang, wear sun protection such as hats, sunglasses and use sun block, etc.