As the residence of multi-minorities, the largest feature of Lijiang dining is various and Naxi food is the major part of the food of Lijiang. The most famous area of Lijiang for dinning is Sifang Street and its surrounding areas.There are some specialties from abroad because of plenty of tourists swarming into Lijiang. 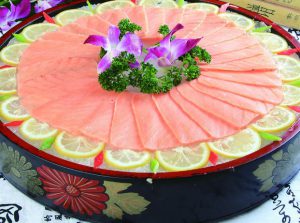 On the street of Lijiang, a famous snack named Chickpeas Bean Jelly is ubiquitous. Chickpea is a kind of soybean and it is just like the eyes of the chicken in shape, hence the name "Chickpeas" is given, which means chicken eyes in Chinese. Chickpea is main ingredient of chickpeas Bean Jelly. Soak the chickpea, grind the socked beans into soya-bean milk, boil it the milk until it turns gray-white and pour it into different-shape containers for modeling, then Chickpeas Bean Jelly is made. Seasoned with red pepper, green leek, green onions, mustard, vinegar and other seasonings, the chickpeas bean jelly is so luring in appearance and palatable in taste.

Lijiang Stuffed Bun is a well-known snack in Lijiang created by diligent Naxi people, which is characterized by its luring color, crisp flavor and delicious taste. Wheat flour is the main ingredient for the Lijiang stuffed bun. Mix the flour with spring-water from Jade Dragon Mountain, smear plant oil onto it on the marble slate and roll the dough into a large thin piece. After scattering minced ham or sugar, roll it into cylinder-shape. Put the two ends of the cylinder together and press it into oblate-shape. Add sesame, walnut and others seasonings, bake with soft fire on the pan until golden-yellow, then the delicate round-shaped Lijiang Stuffed Bun is prepared. It has two flavors, salted and sugary, and you can choose either of them as you like. 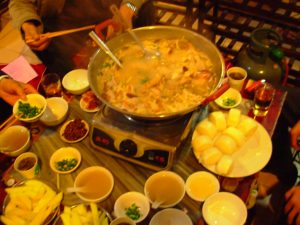 The main ingredient in the salted pork ribs hot pot is pork ribs salted with wine, sugar, and spice and other seasonings. After stored the salted ribs in a water-filterable wooden vat for 15 days, the pork ribs are fully permeated with salt and flavor of flesh and rib are well-blended. Later, dry them in the shady ventilating area for one or 3 months, then the savory salted pork ribs are prepared. Boiling them with other vegetables in hot pot, the Salted Pork

Lijiang also has many special and precious mushrooms, such as the pine mushroom, termite mushroom and morel mushroom. The salmon and preserved pork ribs are not landmark dishes of the local place but are very popular.

Special snacks of Lijiang include the Lijiang pan cake, buttered tea and chickpea jelly. The oldest and most traditional with most folk featuring product of Yunnan is Heqing Wine. And Lijiang Baba is now as famous as Heqing Wine. It is a round flour pan cake made of flour, ham scallions or sugar. Lijiang Baba can be described as a kind of deep-fried flour pan-cake stuffed with meat or vegetables.

As the tourism develops in Lijiang in recent years, Lijiang not only has kept its local food but also has introduced in many other cuisines for tourists, such as the Guangdong cuisine, Sichuan cuisine, Hunan cuisine, Korean cuisine and Japanese cuisine.

It seems we can’t find what you’re looking for. Perhaps searching can help.