As one of the minority enclaves, Lijiang has some special festivals to celebrate due to its minority customs, including: Bangbang Festival, Sanduo Festival, Dongba Fair, Torch Festival, July Festival, Zhuanshan Festival and Mt Festival. Moreover, the well known Lijiang Folk Festival and Snow Mountain Festival is also held in Lijiang.

Bangbang Festival is the Lijiang Naxi traditional festival, it will be held on each January 15 (lunar calendar). During the festival, people carrying horse halters, cages, plow, rake, bucket, hoe and other wooden farm flock to Lijiang Naxi Tribe Autonomous County town of Dayan transactions.This festival themed with trade, flower exhibition, religion and folklore performance and it will be held for three days.

Every year on the third lunar month’s fifth day, Dongba Fair is celebrated in Lijiang Yushui Village in high spirits. Dongba is the  religion leaders of Naxi people.In this day, Naxi people will dress up and gather at the Dongba Shi Luo Temple very early in the morning, burning the incense to worship their god and ancestors.

This is a famous festival of those of the Yi and Naxi Group living in Ninglang County and Lijiang old town. Originally held on every 25th  to 27th June of Chinese lunar calendar. According to ancient rules, it will last for three nights. This festival was supposed to use fire to protect crops from the destructive insect by fire and people will place a giant torch in the front of their doors. By night, the locals will hold a long and tiny torch in hand, and gather for singing and dancing around a bonfire.The burning torch is regarded as an auspicious sign by Naxi and Yi people.

July Festival is another important festival of Naxi people. It occurs each middle July according to lunar calendar and mainly involves trading of horse or cows. Thus, it is nicknamed as Horse Trade Festival. During this 10-day-long festival, Naxi people will bring their live stocks, herbs and various specialties and throng into Lijiang ancient town. It is a very good opportunity to have a glimpse of local people’s life.

Zhuanshan Festival usually take place on July 25(lunar calendar), this is one of the very important festivals for those Mosuo people living along the charming Lugu Lake. On this day, Mosuo people will dress up and visit the Lion Mountain beside Lugu Lake on foot or ride a horse. In addition, they also hold a series of entertainments such as horse racing, wrestling and singing. At this time, young men and women will also find a potential walk marriage partner.

Lugu Lake Mt Festival is the most important festival Mosuo people, also known as Mt Council, Mosuo called Mt festival as "the monastery's Day." According to legend, the ancestors of Mosuo people is born on this day. During the holiday season, Mosuo people are wearing the most beautiful national costumes, to worship the goddess, dance, archery, make Assia and other activities.

Lijiang is an ancient kingdom in the heart of the Naxi, Dongba culture of Naxi ancient culture is the means, because the preservation is named in the Dongba religion, Dongba culture and long history, has been in the past thousand years of history.

Naxi Dongba to retain the text known as the world's only complete "living hieroglyphics," so far there are retained in the Ming Dynasty Baisha murals and filled with 13 peaks of Jade Dragon Folklore.

In 2002 Lijiang hosted the Snow Mountain Festival, the first large-scale rock festival in mainland China. More than 50 bands are expected to perform at the foot of Jade Dragon Snow Mountain. Watch this space as October approaches for more announcements about the festival.

Naxi ancient music is regarded as soul of Lijiang, and known as ‘living fossil of music’. The Naxi ancient music has 3 features, that is: the piece of music is ancient, the music instrument artists play is ancient, the artists play on the stage are old. Most of music lyrics originate from poetry of Tang Dynasty (618AD-907AD) or Song Dynasty (960AD—1279AD). And the music pieces combine the original charm of ancient music and popular tune of Lijiang, which you can appreciate strong Naxi style.

The Bar Street links to Square Market in one direction and leads to the Giant Water Wheels in another direction. At night, it becomes the most bustling place in the Old Town. A large number of bars decorated in different styles are famous highlight of Lijiang Old Town. In the daytime, the flowing water, shoal of fish, willow trees, ancient street and leisurely passerby form a tranquil and peaceful scene. When the evening closes in, many travelers from around the world get together here, communicating their romantic experience or just involving themselves in the fascinating night scenery. The blurred lights, red lantern, boiling music and crowded people may make your blood boil. Different from the reinforced buildings in the cities, most of the bars in Lijiang Old Town are two-storied wooden constructions, which add more charm. 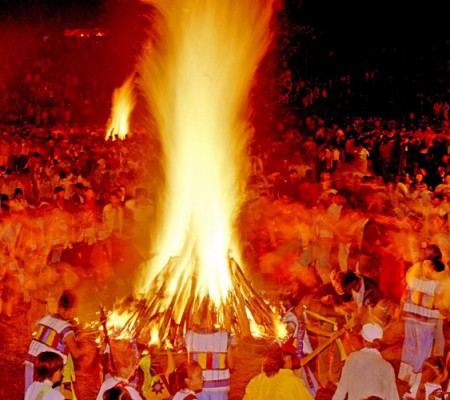 Chinese Name:云南彝族火把节 Torch Festival of Yi Ethnic Minority in Yunnan The Yis scatter over very widely and they are divided into many branches, so their festival culture is also...