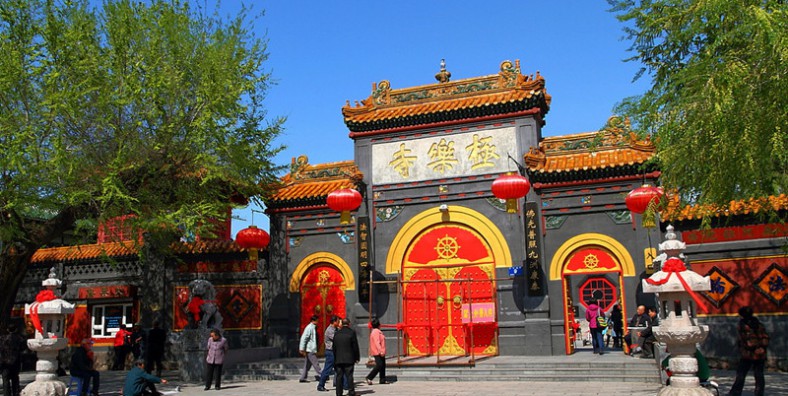 Jile Temple is a famous Buddhist shrine in the northeastern region and one of the most fragrant temples in Harbin. It is said that the praying here is very effective. On the first day of the lunar calendar, the first day of the Lunar New Year, and the annual celebration of the Buddha's Day, the Jile Temple will hold a grand temple fair, when the crowds in the temple gather and the lively is extraordinary.

Type: One of the top 4 temples in northeast of China

Why is Jile Temple in Harbin So Special?

Jile Temple is the biggest Buddhist building complex in the Heilongjiang Province, with the grounds covering 27 570 square meters and the buildings 5 186 square meters. Ji Le Temple is regarded as one of the four famous Buddhist temples of the three northeast provinces of China, and Prajna Temple in Changchun, Ci’En Temple in Shenyang and Lengyan Temple in Yingkou.

Jile Temple ( 极乐寺) of Harbin, China is the biggest Buddhist building complex in Heilongjiang and was constructed between 1921 and 1924. The grounds cover 27 570 square meters and the buildings 5 186 square meters. It is located at No. 5, East Dazhi Street, Nangang Dist. in Harbin. It is one of four famous Buddhist temples in the three provinces in northeastern China, the other three being Banruo Temple in Changchun, Cien Temple in Shenyang and Lengyan Temple in Yingkou.

Layout and Architecture of The Jile Temple

The Jile Temple strictly follows the traditional Chinese temple style. It is a magnificent and resplendent architectural complex. Every house was built of blue bricks and glazed colored tiles. Facing south, it can be divided into three courtyards on the left, middle and right. The Mountain Gate was built to resemble the Chinese character “山” (mountain in English), thus the name “Mountain Gate”. The front hall is the Heavenly King Hall, followed by the Hall of Mahavira, the Hall of Three Saints and Scriptures-storing Tower according to priority.

There are similarities and differences in the shape, structure, ornament and arrangement among the buildings in Jile Temple. For example, the Hall of Mahavira and the Back Hall do not have wood brackets and large open windows, instead, the separate small windows clearly reflects the typical feature of housing in the cold climate of northeastern China.

Ji Le Temple was built between 1920 and 1924 by Master Tanxu, a famous disciple of the Tiantai Buddhist clan. The complex of the temple consists of the Heavenly King’s Hall, the Grand Hall, the Three Bodhisattva Hall, and the Buddhist Book Storage Hall. The main halls are fronted by a Drum Tower and a Bell Tower and other subordinate structures. The most imposing building of the temple is probably the 7-level Futu Pagoda on the eastern tip of the grounds, a 37m tall stone structure building dotted with caves engraved with Buddhist embossed sculptures. At the bottom of the pagoda is a large hall with Buddhist statues. In all, the grounds cover 27570 square meters and the buildings 5186 square meters.

How to Get to Jile Temple From Harbin City

If you want to get rid of hustle of transportation and troublesome navigation, you can book a private tour package which covers visiting, dining and transfer from us. Our local tour guide and driver will escort you to Jile Temple in Harbin with speed and convenience, and take care of all the details. You just need to focus on travel.