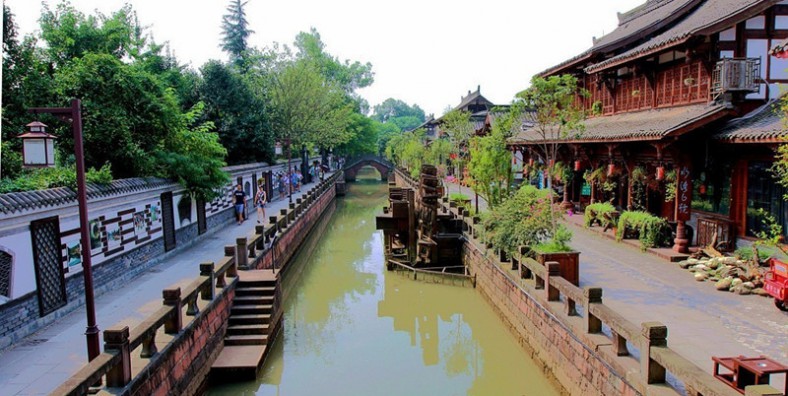 Jiezi Ancient Town is not far from the famous Taoist mountain Qingcheng. With a history of over 1,000 years, it includes 32 temples and a great number of other historical sites. It features an ancient temple which could be traced back to Jin Dynasty, an age-old gingko trees and Nan trees, an ancient stone pagoda and a well preserved ancient street. The town is a good combination of natural scenery and artificial designs.

Chinese Name:成都崇州市街子古镇
Jiezi Ancient Town is not far from the famous Taoist mountain Qingcheng. With a history of over 1,000 years, it includes 32 temples and a great number of other historical sites. It features an ancient temple which could be traced back to Jin Dynasty, an age-old gingko trees and Nan trees, an ancient stone pagoda and a well preserved ancient street. The town is a good combination of natural scenery and artificial designs.

Jiezi Ancient Town is famed as the hometown of the “One Gourd Ladle Poet” – Tang Qiu in Tang Dynasty. Moreover, this 4A scenic spot is called “the Back Garden of Mount Qingcheng”, “the Most Beautiful Ancient Town in Sichuan”, “Hometown of Orchid”, “One of the Top 10 Worthwhile Ancient Towns in Sichuan”.

Jiezi Ancient Town  is located at the foot of Fengqi Mountain, linking with the back mountain of Mount Qingcheng and with Weijiang River flowing through, Chongzhou City, Sichun.

From Chengdu downtown, travelers can transfer to Qingcheng mountain with flexible of choices of transportation.

If you want to get rid of hustle of transportation and troublesome navigation, you can book a private tour package which covers visiting, dining and transfer from us. Our local tour guide and driver will escort you to Jiezi Ancient Town  with speed and convenience, and take care of all the details. You just need to focus on visiting.

Guangyan Temple is located in Fengqi Mountain, with a history of more than 1400 years .Guangyan Temple in the Ming Dynasty is a true royal monastery, one of the Buddhist shrines in Sichuan. The monastery is famous as “the first temple of  Xichuan”. It is said that the the emperor Zhu Yuanzhang and his grandson emperor Jianwen, of Ming Dynasty, had sought asylum in this monastery.  The story added a lot of mysterious atmosphere to the ancient town of Jiezi.

Famous poet Tang Qiu in Tang Dynasty was born in  Jiezi Ancient Town. Although his poem is not as famous as poem of Li Bai and Du Fu, you can find his traces in Quantangshi ( Complete Poetry of the Tang ) .

Every time when Tang Qiu wrote a poetry , he twisted it into paper balls, and put it into a gourd, never show it to others. In his later years, he put the gourd in a river, then let it drift away. Fortunately , the residents near the shore found it, and let it too be able to leave 35 poems.

Because of its unique geographic location and unique climate, Jiezi Old Town gave birth to some precious orchids such as “Silver Bar” “银杆素” “Spring Sword Vegetarian” “春剑素” and “West Sutra Light.” “西蜀道光”
Annual Orchid Festival continues the prosperity of the streets, adhering to the charm of the ancient town. People love the unique cultural connotation of orchids.

Ginkgo Square is named after five precious ginkgo tree. These ancient ginkgo trees have more than a thousand years of age, according to legend, they were planted by famous poet “one ladle poet” Tang Qiu. Ginkgo trees produce large amounts of fruit each year, but to protect the remains of the millennium, people in the ancient town never pick the fruit of ginkgo trees.

What is “font”? Jiezi Ancient Town is the hometown of Tang Qiu, a poet of Tang Dynasty, and DuFu and Lu You used to write poems in this town. Therefore, people in ancient time think it is immoral to discard paper with randomness. They put the discarded paper in a special paper basket and incinerate it at Font Tower.

You can choose to accommodate at hotel at Jiezi ancient town, where has different level of hotel.

Please check out at ourwebsite

Dujiangyan Confucius Temple is the largest county-level Confucius Temple in Sichuan Province. In ancient times, it was used for commemorating and worshipping Confucius and his disciples and it was the place to study Confucianism.
Qingcheng Mountain — World Heritage, this famous Taoist mountain was portrayed in Kungfu Panda

Dujiangyan Panda Base: China Conservation and Research Centre for the Giant Panda (CCRCGP), Dujiangyan Base (中国大熊猫保护研究中心都江堰基地) is a brand new giant panda breeding base in Chengdu.