Hukou Waterfall of Yellow River between Shaanxi and Shanxi 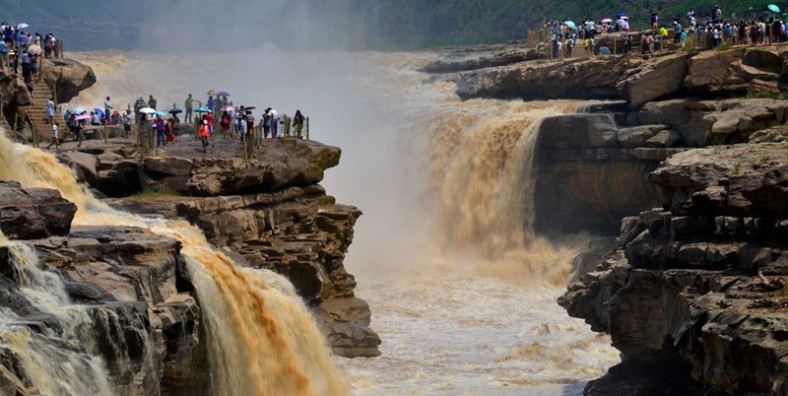 Why is Hukou Waterfall of Yellow River So Special？

Located in the intersection of Shanxi (山西) Province and Shaanxi (陕西) Province, Hukou Waterfall is divided into two parts by the Yellow River. The two parts are not connected by a bridge, so you can visit ether Shanxi part or Shaanxi Part.

Hukou Waterfall is the largest yellowish waterfall in the world and the second largest waterfall in China next to Huangguoshu Waterfall in Guizhou Province. Its tableau has appeared in many Chinese paintings and once printed on the Chinese current of 50-yuan bill. Featured wonders in Hukou Waterfall have attracted incomputable tourists to appreciate the natural splendor, making it a Key National Scenic Spot , an excellent tourist attraction, geological relic reserve , and an AAAA Scenic Spot.

From its headstream in Qinghai Province, the Yellow River runs all the way eastwards, carrying the history and civilization of 5,000 years across the Qin-jin Gorge in the northwest Loess Plateau. The width of the waterfall changes with the season, usually 30 metres (98 ft) wide but increasing to 50 m (164 ft) during flood season. It has a height of over 20 m (66 ft). When the Yellow River approaches the Hukou Mountain, blocked by mountains on both sides, its width is abruptly narrowed down to 20–30 m (66–98 ft). The water’s velocity increases, and then plunges over a narrow opening on a cliff, forming a waterfall 15 m (49 ft) high and 20 m (66 ft) wide, as if water were pouring down from a huge teapot. Hence it gets the name Hukou (literally, “flask mouth”) Waterfall.

One small cave is located in the front-left side of Hukou Waterfall. It is said that there once to be an evil Dragon making trouble and causing floods. When the King Yu came to tame the flood and arrest the dragon, the dragon escaped and scurried into the mountain, leaving this deep cave. Compared with the overview of Hukou Waterfall from higher place, the scenery from Dragon Cave is quite different.

There is an about 40-meter wide, 15-meter deep trough inlaid into the riverbed between Hukou Waterfall and Mengmen Mountain. An old history goes that this trough is made by a dragon. Eroded by water for hundreds of thousands of years, the rocks on each side of the Dragon Trough appears in various shapes and patterns, which arouses people’s imagination.

The sprays due to the repeated impact of Hukou Waterfall, in addition to the refraction effect of the shine always create a beautiful rainbow – honored as Circumzenithal Arc. Sometimes liking a colorful bridge across the river, sometimes liking a rich multicolored decoration above the shrouded mist and sometimes liking a long dragon plunging into the water, the rainbow never fails to show off its beauty. Visiting Hukou Waterfall around 10:00 am in a sunny day, it’s easy to savor an amazing rainbow. If you are lucky enough, you can even see double rainbows.

Hukou Waterfall appears very differently with different volumes of water from the upper reaches and temperature in each season. Due to large rainfall in summer and the frozen ice in winter, the scenic spot might be closed for the sake of tourists’ safety. So the best seasons range from April to May and September to November.

In the early spring, the frozen river melts and drafts with the raining water, likes an army of soldiers and horses galloping to the far. Soon, the peach trees nearby begin to blossom.

In summer, the gap of the waterfall increases dramatically. As the strong turbulent water rushes downwards with a large amounts of sprays and smokes. What a tableau vibrant.

In autumn, the sky is rather blue and the air is quite fresh. Surrounding mountain spring and brook converges into a one stream shows a relatively light music. Bursts of autumn breezes rustling through brings you smell of wildness.

In the winter, ice-decorated Hukou Waterfall reveals its charm. The subsidiary waterfalls freeze into icicles on the top of cliffs, turning to be fantastic images in various postures on different animals, crouching, standing or sitting.

How to get to Hukou Waterfall of Yellow River

If you want to get out of the traffic and hassle of navigation, you can book a private tour package that includes visiting, dining and transfer from us. Our local guide and driver will escort you to the Hukou Waterfall of Yellow River between Shaanxi and Shanxi in the fastest and most convenient way and take care of all the details. You just have to focus on the visiting.