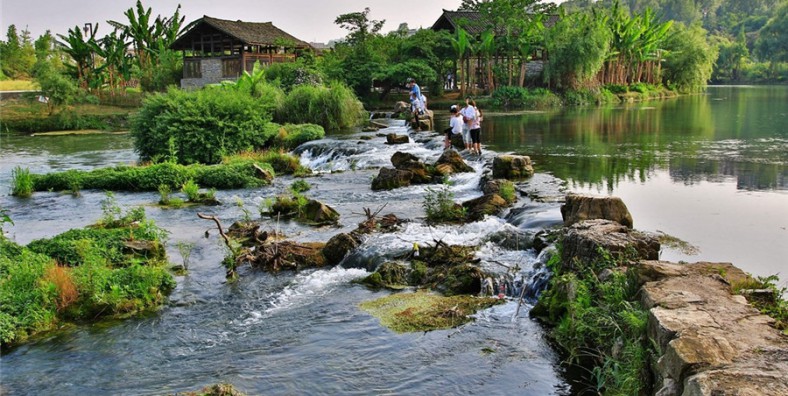 Huaxi Park is the center of the Flower Stream Scenic Area. Blending natural hills and rivers, idyllic scenery with ethnic features, it has gained the name of "Back Garden of Guiyang City".

Huaxi (Flower Stream) Park is the centerpiece of Huaxi Scenic Spot, which is located in the south suburb of Guiyang City, Guizhou Province. It covers an area of about 825 mu, of which about 300 mu is water area. It is made up of seven scenic spots: the Ten-li River Bank, Tianhe Pool, Yanlou Malin, the Ancient Town of Qinyan, Qiantao Mengguan, Gaopo and Xiaobi.

Why is Huaxi Park So Special?

Huaxi Park is the center of the Flower Stream Scenic Area. Blending natural hills and rivers, idyllic scenery with ethnic features, it has gained the name of “Back Garden of Guiyang City”. The climate is mild throughout the year, being cool in summer and warm in winter, thus it is recognized as one of the best resorts in Southwest China.

Huaxi Park was built by a local country gentleman in the Qing Dynasty (1644-1911). He built towers, pavilions and built little islands in the water, planted trees and flowers on the hills. It was rebuilt as a park in the 1930s. After the founding of The People’s Republic of China, the park was equipped with tourist facilities and renamed Flower Stream Park, which means a park where flowers are in full bloom and streams flow.

Huaxi Park is embraced by green mountains and clear streams. The stream and the four hills in Flower Stream Park are all naturally formed. They together form a scenic spot within a 10-km radius. Specifically, they include 8 scenic spots, such as Ten Mile River Beach, Tianhe Pond, Plateau Folk Customs and Natural Scenery, Qingyan Old Town and Qiantao Glade. There are extraordinary sceneries, clear streams and various beautiful flowers and trees in all seasons. The Straight Bridge, Dam Bridg, Pigeon Flying Bridge, Hibiscus Islet and Pine and Cypress Area in the park show their unique charm.

How to get to Huaxi Park

If you want to get out of the traffic and hassle of navigation, you can book a private tour package that includes visiting, dining and transfer from us. Our local guide and driver will escort you to the Huaxi Park and most convenient way and take care of all the details. You just have to focus on the visiting.

Nearby Attractions in Guiyang

One thought on “Huaxi Park (Flower Stream Park) in Guiyang”