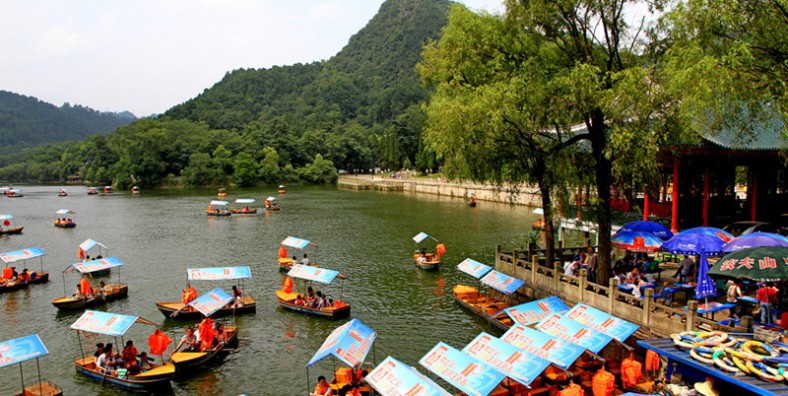 Why is Qianling Hill Park So Special?

Built in 1957, Qianling Hill Park is a unique park in the city. It takes the name from Qianling Mountain in the park, which is the most famous mountain in southern Guizhou. As one of the noted gardens on the Guizhou plateau, it boasts clear waters, green mountains, tranquil forests and old temples. More than 500 energetic and enchanting macaques live in the park. There are eight predominant scenic locations: Sanlingwan, Macaque Garden, Hongfu Temple, Kylin Cave, the Zoo, Qianling Lake, the Wind-Rain Bridge, and the Winding Mountain Path.

Where is Qianling Hill Park?

The address of Qianling Hill Park is: No.187 Zaoshan Road, Yunyan District, Guiyang, Guizhou Province; and the address in Chinese is 中国贵州省贵阳市云岩区市北路枣山路187号. The park lies about 6 km from Guiyang Railway Station.

If you want to get rid of hustle of transportation and troublesome navigation, you can book a private tour package which covers visiting, dining and transfer from us. Our local tour guide and driver will escort you to Qianling Hill Park with speed and convenience, and take care of all the details. You just need to focus on travel.

Qianling Lake was made by damming the Daluo Spring in 1954. In 1999 when a project to clean up the silt in the lake was completed, it grew to an area of 35 hectares with clearer water and a sturdy dam. The crystalline surface mirrors the green and gentle willows and ornately decorated and finely built pavilions. On the western bank stands a memorial to the martyrs who died during the war for the liberation of Guizhou Province. Every Tomb-Sweeping Day, thousands of people go there to worship the heroes.

Originally built in 1667, it is the largest temple of Zen Buddhism in Guizhou Province. It features majesty and sobriety. Hongfu means to develop Buddha’s spirits and to benefit mankind. Today it is rated as one of the 142 National Key Temple Scenic Areas as well as the Key Cultural Relic Preservation in Guizhou Province. ‘Hongfu’ is Chinese for ‘good fortune’, which is an apt name for the temple considering its history. It was in 1672 when Chisong, a monk during the Ming Dynasty (1368-1644) founded the temple. It had very poor beginnings, being little more than a small hut, but Chisong was determined that it should become a revered shrine and through his persistence many local officials gave their support. In time the temple was to become the most important Buddhist temple in the area.

Inside the Kylin Cave there is a giant bell emulsion look as Kylin (Ancient China Dragon), called Kylin Cave in ancient time. As early as in 1530, before the cave there was built temple “Baiyi temple”. And a stone across the Kylin Cave in distance is Tanquan Spring which is famous scenery for the past. But now it is the provincial cultural relic protection unit and the city of patriotism education base.

One thought on “Qianling Hill Park in Guiyang”