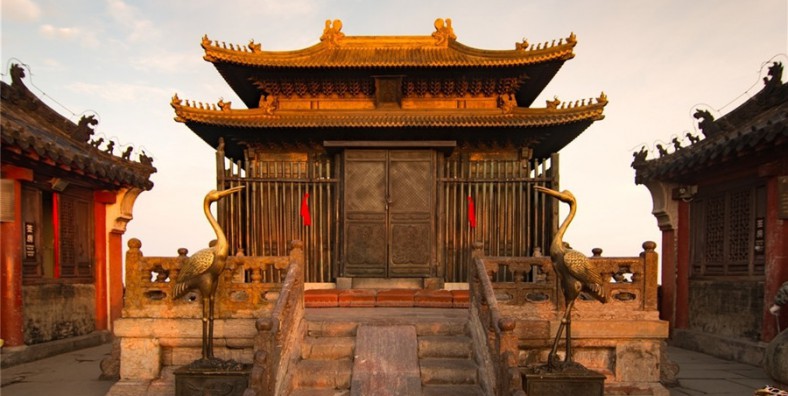 It is a rare treasure in ancient Chinese architecture and casting technology and is a national key cultural relic protection unit.

Why is Golden Palace So Special?

Where is Golden Palace

olden Hall in Wudang Mount is located on the Tianzhu Peak. In the northwest of Hubei province of Tourism Special Economic Zone in Shiyan City.

Built in 1416 of the Ming Dynasty, it is made of gold materials and has a wooden architectural style, hence the name Gold Hall. Despite more than 500 years of wind, frost, rain, snow and lightning, things are still resplendent and magnificent, and they are as beautiful as ever. They are rare treasures in ancient Chinese architecture and casting technology and belong to key national cultural relics protection units.

It is the symbol of Wudang Mountain. It represents the heyday and lofty position of Taoism in the ancient royal system. Standing in front of the golden temple, tourists can have a bird’s eye view of Wudang mountain. The majestic mountains are solid, and the worship and sacred atmosphere make this place the holiest place in Wudang Mountain. The golden hall was first cast part by part and then riveted and welded together. This connection is accurate and complete without any casting or gouging marks. Despite more than 500 years of natural erosion and lightning attacks, the palace is still resplendent and magnificent, as if it were new, and is regarded as a pearl in the history of ancient Chinese architecture and casting technology. There is a bronze statue of Zhenwu in the Golden Hall. This is another name for the Northern Emperor, a popular Taoist god. More gilded bronze statues stood around the statue. Between them, statues and halls represent the best bronze wares of the Ming Dynasty.

The best time to pay a visit is in March to May & September to November.

1. Starting from Shiyan: No.202 intercity bus can take tourists from Shiyan Railway Station to the mountain in 70 minutes.
2. From Xi ‘an: There are three direct tour buses to the scenic spot every day. It takes about 4 hours for a coach to leave Xi ‘an coach station opposite Xi ‘an railway station. the fare is CNY 111.5 yuan. The other two long-distance buses depart from coach station at Sanfu bay at 8:00 and 13:00 respectively, which takes about 4.5 hours and costs CNY 159 yuan. They all reached coach station 400 meters (440 yards) west of the entrance to Wudang mountain.
3. Starting from Wuhan: There is a through bus at Jinjiadun bus station, which starts at 13:40 every day. It takes about 6 hours and costs 179 yuan per person