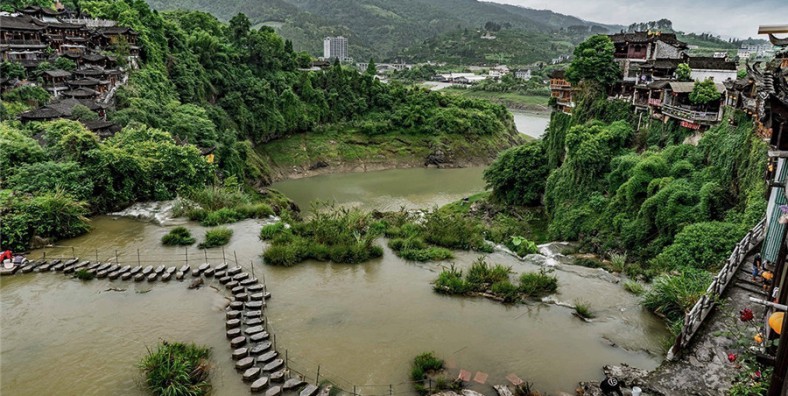 Type: One of famous ancient towns in China

Why is Furong Ancient Town So Special?

Furong Town, whose real name is Wangcun, is an ancient town with a history of more than 2,000 years. It is also known as the “Millennium Ancient Town Hanging on the Waterfall” because of the magnificent waterfall. It is also known as the four famous towns of Xiangxi and the famous towns of Xiangyang, and the reputation of “Little Nanjing”. Later, the film “Furong Town” starring Jiang Wen and Liu Xiaoqing was filmed here and changed its name to “Furong Town”. It is now a national AAAA level scenic spot.

Furong Town, formerly known as Wangcun, is about 50 kilometers from Yongshun County and has a history of over 2,000 years. With the filming of the movie “Furong Town”, directed by Xie Jin and starring Liu Xiaoqing and Jiang Wen, the town became famous and was renamed to Furong Town. The town is also known as a “million-year-old town hanging on a waterfall”. The center of the ancient village is built atop a tall rock from which drops a majestic waterfall tens of meters to the foot of the town. The Tujia shacks in the town are all located quite close to the waterfall.

This waterfall is about 40 meter wide with a drop height of 60 meters, and looks spectacular in rainy season from June to August. Walking behind the hanging water screen of the waterfall is like placing oneself in a crystal palace. Furong town water fall s also the biggest waterfall in west Hunan province, any tourist visits here would see this place and you can hear the crystal sound of the waterfall ten miles away from it.

The Palace of Tusi (appointing hereditary headmen of national minority in the Yuan, Ming and Qing Dynasties in old China) is another highlight in the town. It is actually a Tujia Diaojiaolou building complex. It was built by a rich chieftain of the Tujia nationality for summer resort. In front of the palace is an ever-flowing stream and on the both sides are cliffs.Building on the cliffs makes the palace easy to defense any invasion, during the ruling of Tusi, those Diaojiaolou buildings were soldiers’ dormitory in fact.

The Wuli Slate Street of Furong ancient town with many traditional shops and buildings on its both sides, is winding through the whole town and leads you to the pier of Youshui River(酉水). From the pier you can enjoy a different view of Furong Waterfall and Tusi Palace on your left-hand side. Wuli Slate Street has a history of over 2300 thousand years, it has witnessed the history of Furong ancient town since the time when it was still a transportation hub both on land and via water.

At the entrance of Furong Waterfall, there is a rock cave. This is the relic site of the early native Tujia people thousand years ago. According to the local book, a group of people escaping from central war came here to survive. And they did survive and flourish, and run the place together.The caves were big enough to accommodate thousands of people, after thousands years of water erosions, it is not like it was before.

To travel in Xiangxi, there is no obvious best time due to the agreeable weather all year round. If have to choose a best time, maybe it is from July to September with celebrated ethnic festivals of Miao people, the Songs Festival on the sixth day of lunar June and the Autumn Festival on the 13th Chinese solar term, Liqiu, which means the beginning of the autumn and falls generally on August 8th or 9th.

How to Get to Furong Ancient Town From Xiangxi

If you want to get rid of hustle of transportation and troublesome navigation, you can book a private tour package which covers visiting, dining and transfer from us. Our local tour guide and driver will escort you to Furong Ancient Town in Xiangxi with speed and convenience, and take care of all the details. You just need to focus on travel.