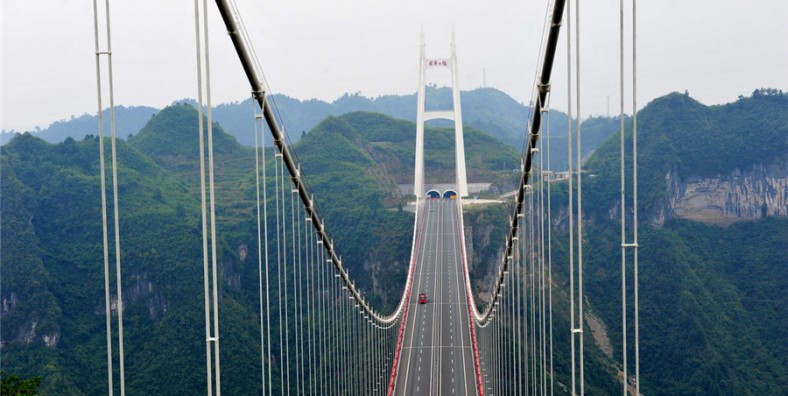 Deep into the mysterious West Hunan Province of central China, Aizhai Suspension Bridge is an outstanding modern structure and the most important project on the Jishou to Chadong expressway (part of Changsha to Chongqing expressway passage) to improve the traffic and optimize the transport system between Hunan and Chongqing.

Type: The thirteenth-highest bridge in the world and the world's nineteenth-longest suspension bridge.

Why is Aizhai Bridge So Special?

Aizhai Bridge: A highway bridge wonder in China, offering great views of Dehang Canyon and the Aizhai Winding Road. The bridge was built as part of an expressway from southwest China’s Chongqing Municipality to Changsha. The bridge is famous for the spectacular view it offers those crossing it.

The Aizhai Bridge is located in the Azhai Town of Xiangxi, Hunan province. The Aizhai Bridge Scenic Area is composed of the Aizhai Bridge, the Jidou Village and the Tiantiantai. The Aizhai Bridge spans the Azhai Grand Canyon, and the Deyi River passes through the valley bottom. The bridge deck design elevation and the ground height difference are up to 100 meters. The bridge type scheme is a steel truss stiffening beam single-span suspension bridge, which adopts a structural design scheme in which the tower and the beam are completely separated. Here you can feel the shock of the vast bridge project and appreciate the beautiful pastoral scenery of Aizhai Town.

Construction and Structure of Aizhai Bridge

With a main span of 1,146 metres (3,760 ft) and a deck height of 336 metres (1,102 ft), as of 2013, it is the thirteenth-highest bridge in the world and the world’s nineteenth-longest suspension bridge. Of the world’s 400 or so highest bridges, none has a main span as long as Aizhai. It is also the world’s highest and longest tunnel-to-tunnel bridge. The bridge contains 1888 lights to increase visibility at night.

Construction on the Aizhai Bridge began in October 2007 and was completed by the end of 2011, ahead of schedule. The bridge was temporarily opened to pedestrians during the 2012 Spring Festival and was formally opened to traffic in March 2012.

Right next to Aizhai Suspension Bridge is the Aizhai winding road, another highway wonder on the China National Highway 319 (Hunan to Sichuan Highway). This 6-kilomter-long road has 13 bends of 70 to 90 degree angle. The widest part of the road is 7 meters and the vertical height is 440 meters. All of these make it difficult to construct and the engineering expense is high. According to the records, it took more than 2000 people 7 months to complete the Aizhai widing road in 1935. Unfortunately, over 200 people of them died of the accidents when building the road. Thereafter, a bronze statue has been made and stands beside the road to commemorate the victims.

To travel in Xiangxi, there is no obvious best time due to the agreeable weather all year round. If have to choose a best time, maybe it is from July to September with celebrated ethnic festivals of Miao people, the Songs Festival on the sixth day of lunar June and the Autumn Festival on the 13th Chinese solar term, Liqiu, which means the beginning of the autumn and falls generally on August 8th or 9th.

How to Get to Aizhai Bridge From Xiangxi

If you want to get rid of hustle of transportation and troublesome navigation, you can book a private tour package which covers visiting, dining and transfer from us. Our local tour guide and driver will escort you to Aizhai Bridge in Xiangxi with speed and convenience, and take care of all the details. You just need to focus on travel.