Ngari Prefecture (coordinates: 78°23′40″～86°11′51″ E, 29°40′40″～35°42′55″N) is located  in the westmost of Tibet Autonomous Region with an altitude of 4,500m. Many dominating peaks are over 6,000 meters. Ngari borders Nepal and India in the west, which makes it very convenient for pilgrims from Nepal, India to traveling to Ngari. Highway is the main way to Ngari. You also can take a plane from Lhasa to Ngari Gunsa Airport.

How to Get in Nagri

Ngari Gunsa Airport that opened in July, 2010 is located in the southwest of Shiquanhe Town, the center of Ngari area. And there is airport shuttle bus heading to the airport from Shiquanhe Town.

There are daily two airlines flying from Lhasa to Ngari, which are operated by Shenzhen Airlines and Tibet Airlines and it takes about 2 hours to arrive. And the airline distance is 1120 kilometers.

The airline(CA4417/8) serves travelers to get in Ngari which departs from Chengdu in the early morning, transits in Lhasa Gonggar Airport, then keeps flying to Ngari Gunsa Airport, which takes about 4 hours to arrive at Ngari.

If tourists would like to get to Ngari by long-distance bus, there are two roads head to Ngari from Lhasa: North Road(1,760km), South Road(1,190km). And it's the most economical and common way for tourists to get into Ngari.

Most of tourists choose to get into Ngari by the south route, which can appreciate magnificent and wonderful landscape on the way. The south route wriggles between Mount Himalaya and Gangdise, passes Shigatse, Lhatse and then arrived at Lake Manasarovar. After that, it goes south to Burang County and turns northwest to Mount Kailash. Finally, the bus arrives at Shiquanhe Town.

The towns that the north route will pass are busier than that of south route so that commercial visitors may prefer the north route. The bus will pass the place above 6,000 meters and tourists can see groups of wild ass and Tibetan antelope.

How to Get Around Nagri

The main transportation inside Shiquanhe town is taxi. And the price is normally 5 yuan if you visit inside the downtown. The regular bus between Burang County and Shiquanhe departs only in the morning, which will take about 6 to 8 hours to arrive and cost 180 yuan. 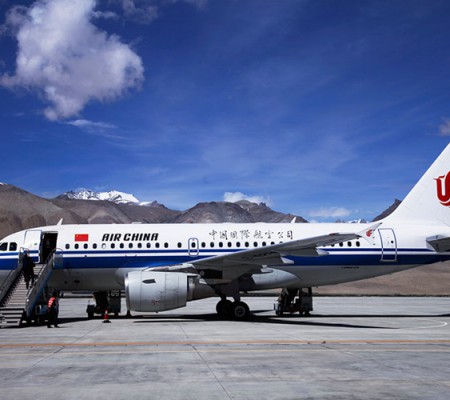 Ngari Gunsa Airport (IATA: NGQ, ICAO: ZUAL) is a dual-use military and civil airport serving the town of Shiquanhe in Ngari Prefecture, in the southwest of China’s Tibet Autonomous Region near the Indian border. It started operations on 1...