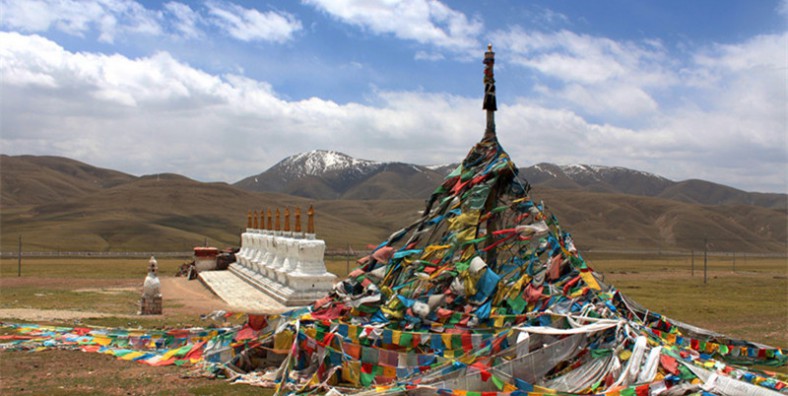 Changtang Grassland is also named as Changtang Plateau, North Tibet Grassland and Nagqu Grassland. Changtang is a plateau in the west and north of Tibet, extending to the southeast of Ladakh, with vast plateaus and huge lakes. From eastern Ladakh Changtang stretches approximately 1600 km east into Tibet, as far as the Qinghai Province. It is the home of the Changpa nomads.

Changtang Grassland is also named as Changtang Plateau, North Tibet Grassland and Nagqu Grassland. Changtang is a plateau in the west and north of Tibet, extending to the southeast of Ladakh, with vast plateaus and huge lakes. From eastern Ladakh Changtang stretches approximately 1600 km east into Tibet, as far as the Qinghai Province. It is the home of the Changpa nomads.

At present, most areas of Changtang Plateau have become national nature reserves, including Changtang Nature Reserve, the second largest nature reserve in the world. There has been a welcome increase in the number of endangered species since the establishment of the nature reserve. The reserve spans parts of Tibet, Xinjiang and Qinghai. Changtang Wildlife Reserve is located in Ladakh on the Changtang Plateau. The protected area ranges from 14000 feet to 19000 feet above sea level and consists of deep canyons and vast plateaus. There are about 11 lakes and 10 swamps in the Changtang Reserve, and the majestic Indus River flows through it, dividing it into two.

In recent years, with the continuous improvement of ecological environment, Changtang National Nature Reserve has become a paradise for wild yak, Tibetan antelope and many other wild animals. There are now more than 1000 wild animals living in this area. Changtang people are nomadic people, known as Changpa. As of 1989, there were 500,000 herdsmen living on the Changtang Plateau. Unlike many other nomads, the Changpa are not under pressure from settled farmers because most of the land they live in is unfit for farming.

The weather here is harsh and unpredictable. Summer is warm and short, and thunderstorms can occur at almost any time of the year, usually with hail. Because of the high altitude, winter is very cold, like the Arctic.

Why is Changtang Plateau so Special?

1. The Changtang prairie, the part of the Northern Tibetan Plateau prairie in the Nagqu, is about 2400 kilometers long from east to west and 700 kilometers wide from north to south, accounting for 2/3 of Tibet’s area, with an average altitude of more than 4500 meters. It is composed of a series of flat deserts and lakes, relatively altitude of 100-400 meters, sparsely populated, there are large areas of no man’s land.

2. Changtang, one of the five largest pastures in China, lies between the Kunlun Mountains, Tanggula Mountains and Gangdise Mountains. It is not only a paradise for wildlife, but also a fertile land for culture. In the endless prairie, Yaks and sheep that herdsmen rely for existence, as well as tents can be seen everywhere. Herdsmen here creates a dreamy and colorful nomadic culture. There are not only ancient rock paintings, but also many ruins of the ancient Zhang Zhung kingdom. The footprints and stories of the hero King Gesar are all over northern Tibet, Mani stone, prayer flags and ancient pagodas can be seen everywhere. They add some mysterious colors to the vast prairie. The famous Tang-Tibet Ancient Road runs through the north and south.

3. The tents are a great sight here. In addition to the ancient yak tents, there are red, blue, yellow, green, green and white nylon tents, they are colorful and in various shapes. Many tents are topped with religious flags.

4. Most striking is the festival costumes of herdsmen, especially girls and middle-aged women wear, which are mostly decorated with expensive Tibetan robes, with ornaments hanging all over their heads, necks, hands and waists, jingling as they walk. In particular, at the annual Cha Ching Horse Racing Meeting(恰青赛马会), the whole Changtang prairie is full of bravery and Sturdy under the white clouds and blue sky.

1. The altitude of Changtang Prairie is more than 4500 meters above sea level. Although the vegetation is rich, after all, it is the plateau, the environmental oxygen content is relatively less. Therefore, you should pay attention to the plateau reaction before coming to the Qiangtang prairie. You’d better carry the medicine which resists the altitude reaction. Besides, prepare some clothes, food, water and necessary medicines before entering sparsely populated areas.

2. Avoid getting lost. Because the Changtang Plateau is a sparsely populated area. Make sure your driver or guide has been to this place before, otherwise it’s easy to get lost.

3. Do not throw rubbish around in Changtang nature reserves. Bury degradable waste and take away non-degradable waste from the plateau. And watch out for the wildlife that lives there.