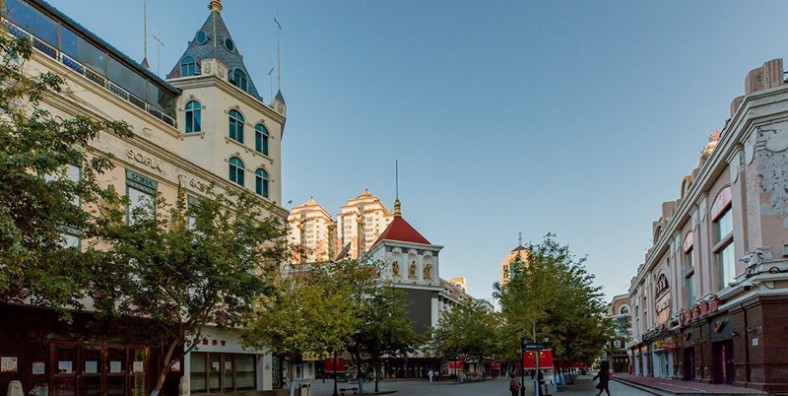 The most exotic place in Harbin is the Central Street, which is the longest and largest Pedestrian Street in Asia. It was first built in 1898 named “China's Big Street” and was renamed “Central Street” in 1925. The Central Street now is the most prosperous commercial street in Harbin City, Heilongjiang province.

Why is Central Street in Harbin So Special?

One of the longest pedestrian streets (1,450 metres or 1,586 yards) in Asia, the buildings along Zhongyang Dajie include a wide range of European styles, some reflecting the Renaissance and Baroque periods. Teeming with shops, malls, cafes, restaurants and other tourist attractions, this street offers a full range of recreational options, as well giving the visitor a snapshot of Harbin’s varied history.

Known as the ‘Eastern Moscow’, Harbin has always been regarded as a unique and exotic city. The most exotic place in Harbin is Central Street, known as Zhongyang Dajie in Chinese. As a new comer to this city without any idea of where to go, be sure to start your journey at ‘Central Street’. This long corridor of European architectural art is the pride of every local in this city. It provides an enthralling destination which abounds with history, attracting tourists from home and abroad.

The pedestrian street begins from the Songhua River Flood Monument in the north to the Jinwei Street in the South, about 1,450 meters long in total. 13 city-level protected buildings assemble here and 71 European-style and simulated European-style buildings on the street.

All of these buildings are in various styles including renaissance style, baroque style, eclectic style, as well as modern style. The small street contains the most influencing four architecture genres, covers the most charming literature phylogeny of 300 years, and reflects the profound history of architecture, a real “Architecture Art Gallery” in China.

Restaurants and specialty shops that line the sides of Central Street, 71 of them are either in an original Russian or European style or in a mock-European or a mock-Russian style, reflecting a 16th century Renaissance, a 17th century Baroque, an 18th century Eclectic, or a Modern School influence, as the case may be. Of the original buildings, 13 of them enjoy state protection as priceless cultural-historical relics. Indeed, Central Street has been called an “Open-Air Architectural Art Gallery”, not dissimilar from The Bund in Shanghai, albeit, on an incomparably more modest scale.

Some of the street’s more prominent buildings include: Jiaoyu (“Education”) Bookstore, an excellent example of Baroque architecture and considered the hallmark of Central Street; the Mod-Er Hotel, formerly the Modern Hotel, built in 1906 in the Art Nouveau style (the name change being an imaginative way to conserve most of the letters of the original name – and note that while mod means nothing in Mandarin, er can mean anything from “son” to “stupid” to “ear” to “pastry” to “tree mushroom” to “jade (or pearl) earring” to “caviar” to “beard” to “hearse” – to name the more interesting examples – depending on how the pair of pinyin letters er is rendered in Mandarin); the Daoliqiulin Shop, also another Art Nouveau building, erected in 1919; and the Xiehe Bank, built in 1917 and now known as the Fuer (“Women and Children’s”) Shop.

Some interesting items can be purchased in the various shops and stores along Central Street – besides a broad range of international and Chinese cuisine, of course. These include: Russian furs (think: mink stoles, mink capes, etc.); Russian leather products (everything from jackets to belts to sheaths to do-dads); British “woolens” (sweaters, vests, gloves, mittens, ear-muffs, etc., in everything from plain wool to merino to cashmere to synthetics); French perfumes and colognes (where you can find all of the non-French as well as the French brands, from Yves Saint-Laurent to David Beckham); Japanese cottons; Swiss timepieces; Indian gunny bags(and countless other Indian tote bags and indispensable accessories); American junk food; and of course the Germans would wish to be sensibly represented by their outstanding medicines, so should a headache or a tummy-ache develop after a night on the town, the nearest pharmacy can put you straight in a jiffy.

How to Get to Central Street From Harbin City

If you want to get rid of hustle of transportation and troublesome navigation, you can book a private tour package which covers visiting, dining and transfer from us. Our local tour guide and driver will escort you to Central Street in Harbin with speed and convenience, and take care of all the details. You just need to focus on travel.