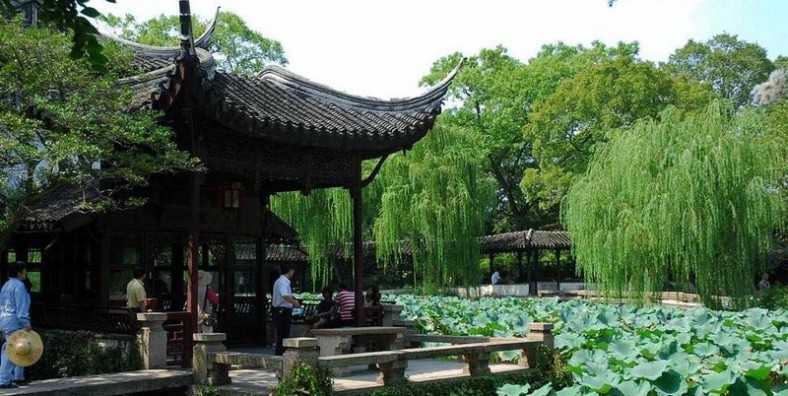 Canglangting was listed as a cultural relic protection unit in Jiangsu province in 1982, and was listed in the world heritage list by UNESCO in 2000 as a supplement project of Suzhou classical gardens, a world cultural heritage.

Why is Canglang Pavilion So Special?

It is the oldest Suzhou garden that can be traced back to the beginning of Northern Song Dynasty (960-1127). In 1045, a scholar Su Shunqin was demoted and sent to Suzhou. He bought the garden and built the pavilion in a setting adjacent to water to enhance the beauty of the garden. The garden was then named Canglang Pavilion in honor of his namesake, Canglang Weng.

Where is Canglang Pavilion

Blue Wave Pavilion is located in the south of Suzhou, at No.3 Canglangting Street, Sanyuanfang, Suzhou, and is one of the four famous gardens in the city.

This is the oldest Suzhou garden, dating back to the early Northern Song Dynasty (960-1127)

On April 27, 1949, Suzhou was liberated, and the Suzhou Municipal People’s Government took over Canglang Pavilion and officially opened it to the public at the Spring Festival in 1955. Canglang Pavilion was renovated again in 1978.

In 2000, Canglang Pavilion was listed as a world cultural and material heritage. In 2005, Canglangting was upgraded to a national key cultural relic protection unit. Famous garden through the ages, vicissitudes of life forever.

Different from other gardens, Canglang Pavilion emphasizes the harmony between man-made buildings and natural environment. Before entering the garden, you can see a beautiful green pond surrounded by weeping willows. In the garden, you will see incredible artificial rock formations, divided into two parts. In the east, the earth is mixed with natural yellow stones and built in a manner similar to natural hills. In the west, exquisite stones collected from the lake are used to create another hill with natural scenery. All these rock formations are planted with green trees and bamboos, which increase the beauty of the scenery and create the feeling of walking in the primitive mountain forests. There are also winding corridors with pavilions and pavilions that connect the hills and pools. When you walk along these corridors, along the unique stone structure and a path beside strategically planted ancient trees, you seem to walk in the primeval forest. The architectural design built in the garden is simple and classic, showing the style of the A Qing Dynasty (1644-1911).

The Facing Water veranda is a four-sided hall near the water to the west of the corridor. When you are tired after a long walk, you can sit down and have a cup of tea while enjoying the quiet and beautiful environment in the garden.

At the eastern end of the corridor, a square pavilion is located on a stone beside the pool. It is called fishing platform and is a perfect place to sit and watch different kinds of fish swimming in the swimming pool.

Through the corridor, you can climb up the artificial rock layer along a winding path. In the tree-lined sea, one can faintly see an antique square surging wave pavilion. The beams here are carved with intricate fairy tales, flowers, birds and animal patterns. From the pavilion, you can see the beauty of the whole garden.

At the southern end of the garden, a two-story building called Guanshan Building stands majestically in the garden. It is one of the most delicate buildings in the garden with its cornices tilted. From this building, you can see the mountains around the garden and the beauty of the whole garden.

Five-Hundred Famous Ancient Sages Hall is also an important building in the garden. The stone statues of 594 ancient sages of Suzhou are encased in the glass walls of the hall and form a large art gallery. The hall adds cultural atmosphere to the natural beauty of the whole garden.

March-April and September-October are the best travel times in Canglang Pavilion.