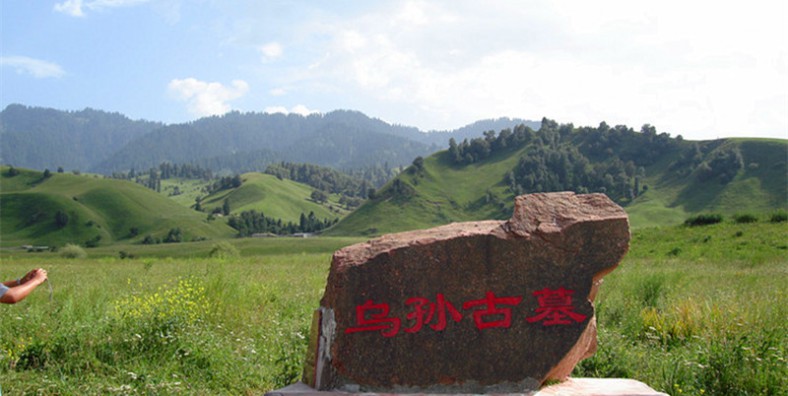 Imagine what a magnificent human building it would be to line up these 10,000 mound tombs one by one and connect 1,000 kilometers. How much manpower and material resources would it have cost to construct such a large number of tombs when the productivity was very primitive!

Why is Ancient Tombs of Wusun Tribe So Special?

These tombs are cultural remains of Wusun tribe that had activated here during the 2nd century B.C. to 4th century A.D. Some of them are arranged in a line with three or five tombs and some in groups consisting of tens or hundreds tombs. The tombs usually have a hillock or stone mound on the ground surface, round, square or trapeziform in shape. According to archaeological excavation, some tomb chambers have a cubage of over 100 cubic meters. From these tombs there have been unearthed valuable cultural relics, such as that of pottery, bronze, iron and gold.

Where is Ancient Tombs of Wusun Tribe

Ancient tombs of Wusun Tribe are distributed over grasslands in Ili, especially in Qapqal, Zhaosu, Nilka, and Tekes, etc, totaling about a ten thousands.

There are also some relatively small mounds of tombs scattered on the Xiata grassland, some in rows of 3 to 5 and some in rows of more than a dozen. These ancient tombs of Wusun, which have experienced thousands of years of wind, frost, snow and rain and have prospered and declined, have added something of grandeur, desolation, vigor, valour, historical details and contemplation to the endless grassy mountain plain. Wu Sun has been active in Yili for more than 500 years, with far-reaching influence. It is one of the ethnic sources that formed the modern Kazakh, and there are still tribes called Wusun in Kazakhstan up to now. The ancient tomb of Wusun is an important cultural relic left in Yili grassland.

Since 1961, Xinjiang archaeologists have been investigating the mound tomb of Wusun in northern Xinjiang and digging some tombs. The common form is that the earth’s surface has a circular seal, and the burial chambers under the seal are all vertical holes. The burial chamber of the large tomb contains a wooden coffin and a wooden coffin. The wooden coffin is built with logs 10-15cm in diameter. The shape of the wooden coffin is very similar to the wooden house that Kazakhs in mountain areas live in winter. The unearthed cultural relics include iron ware, pottery and silk fabrics. Most tombs also have small iron knives and nails. From the burial chamber and the wood coffin processing traces, we can also find some iron tools such as square blade shovel, technetium, axe, chisel and planer. Most of the pottery unearthed are fine mud red pottery, and the implements include pots, pots, basins, bowls, bowls, etc. The unearthed gold wares include gold rings and earrings inlaid with precious stones and gold ornaments with very thin pressure. Many tombs also contain skeletons of animals such as horses, cattle, sheep and dogs. Beside the coffins of some large tombs, there is a half-moon shaped waist pit with mixed human bones. According to preliminary studies, Bortala was one of the main areas of activity of the Usun people from the 2nd century BC to the 5th century AD. Iron tools have been widely used by the Wusun people in the Han Dynasty, and animal husbandry is the mainstay of their economic life. Judging from the construction of large tombs, there was already class division at that time. The slave owners of Wusun were extravagant and extravagant during their lifetime, and even killed slaves in the tombs after their death.