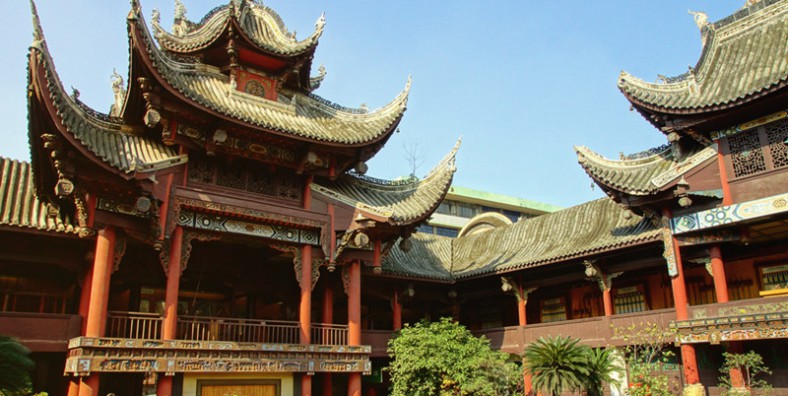 The Zigong Salt Industry History Museum, housed in the former Xiqin Guildhall in the city of Zigong in China's Sichuan province. Zigong has been known as Salt City for centuries because of its brine extraction techniques and the attendant salt-related culture. The museum is far more interesting that it may sound!

Why is Zigong Salt History Museum So Special?

The Zigong  Salt History Museum (自贡市盐业历史博物馆) is a museum in Zigong , Sichuan Province, Southwest China. It is housed in the Xiqin Guildhall (西秦会馆), built in 1736 during the reign of the Qianlong Emperor in the Qing dynasty. The building is a Major Historical and Cultural Site of China.

Xiqin Guildhall was funded by the Shaanxi salt tradesmen, and used as a meeting place for salt merchants from Shaanxi, the main conduit for the Zigong salt. Another building nearby on the banks of the Fuxi (pronounced “fu’shee”) River was the Guild Hall for the salt merchants of Sichuan. The guild hall took sixteen years to build at a great cost. It has a splendid exterior and exquisite internal structure and decoration, including many delicate stone and wooden carvings. It represents the highest level of architecture technologies of its age and is a symbol of wealth of salt merchants. The interior contains a large courtyard with a stone centerpiece of a dragon and phoenix. The guild hall once often hosted Sichuan opera for salt merchants as well as local elites in festivals.

The museum is composed of two main buildings. The Xiqin Guildhall was established by the Shaanxi salt tradesmen, and functioned as a meeting venue for salt merchants from Shaanxi. Covering an area of 6303 square meters, the guild hall took sixteen years to build at a great cost. It was constructed in a grand exterior structure and exquisite decoration including lots of delicate stone and wooden carvings, which represents the advanced architecture technologies of the Ming and Qing dynasties with the folk architectural style. The hall is also a symbol of wealth and power of the salt merchants in Zigong.

Zigong Salt History Museum hosts over 1300 items including a complete set of over 500 drilling tools to reveal the development of salt mine drilling, salt making and natural gas usage in over 2000 years’ time. It shows the accomplishments of Zigong’s salt making industry as well as the wisdom and skills of Chinese people. Some of the salt mining devices are available for visitors to experience.

How to get to Zigong Salt History Museum

If you want to get out of the traffic and hassle of navigation, you can book a private tour package that includes visiting, dining and transfer from us. Our local guide and driver will escort you to Zigong Salt History Museum in the fastest and most convenient way and take care of all the details. You just have to focus on the visiting.