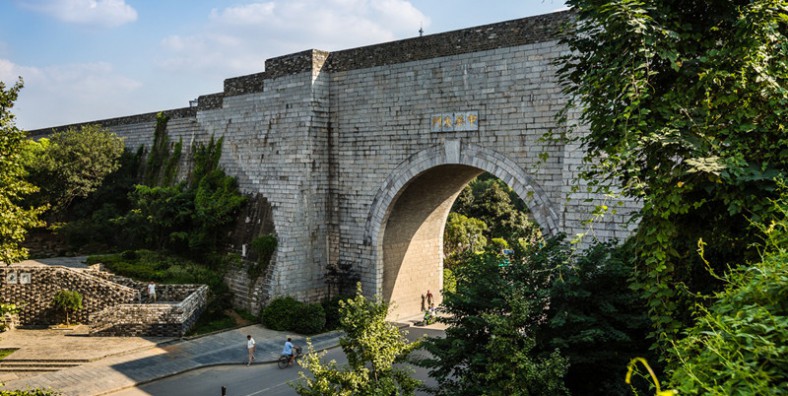 Zhonghua Gate(中华门) is one of the thirteen gates of the Ming Dynasty’s capital city wall in Nanjing. Originally known as Jubao Gate(聚宝门), it is the largest existing gate in China and an outstanding representative of defensive architecture in ancient China. Zhonghua Gate is the most well-preserved and complex Gate Castle in the world.

Zhonghua Gate is the largest and most complete one of the thirteen gates. Its original name was Jubao Gate(聚宝门), which was named after Jubao Mountain(聚宝山) in the south of the city. In 1931, it was renamed Zhonghua Gate because of the construction of Zhonghua Road(中华路). The three Chinese characters above this door are the handwriting Chiang Kai-shek.

Myth of the Gate

According to the legend, when Zhu Yuanzhang(朱元璋), the first emperor of the Ming Dynasty, had the gate built.

During the construction of Jubao Gate in Hongwu Period(洪武年间) of the Ming dynasty, an accident happened. The foundation of the gate building suddenly caved, so that the whole gate building collapsed. Zhu Yuanzhang, the emperor of the Ming dynasty, knew about this, so he ordered his counsellers to find out the reason, they said that there was a monster on the foundation of the city wall who ate the earth and bricks of the city wall, and he needed to bury a Jubaopen(聚宝盆, treasure bowl) under the city wall to suppress it. When the monster eats earth, the bowl immediately creates new earth to keep the foundation of the wall from sinking.

Due to the strict quality tracking system, we can still see the inscriptions on the breaks. According to preliminary estimates, hundreds of millions of bricks were used to build the city wall during the Ming dynasty. The bricks are generally 40~45 cm long, 20 cm wide and 10~12 cm thick. Because the bricks comes from all over the kingdom, the earthy character of the brick material also shows diversity.

In order to ensure the quality of brick, the imperial court required local officials from all prefectures, counties, till the brickmaker have to leave their names on the bricks, so that when the acceptance of unqualified brick to investigate the responsibility of the brick-making person, even to kill them. This strict “quality tracking system” ensured the high quality of the construction of the city wall during the Ming dynasty.

How to Get to Zhonghua Gate

If you want to get rid of hustle of transportation and troublesome navigation, you can book a private tour package which covers visiting, dining and transfer from us. Our local tour guide and driver will escort you to Zhonghua Gate with speed and convenience, and take care of all the details. You just need to focus on travel.

For Independent travelers, you can get there

Best time to visit: as a cultural sight, it is suitable for visiting all year around.

One thought on “Zhonghua Gate (Zhonghuamen Castle) in Nanjing”