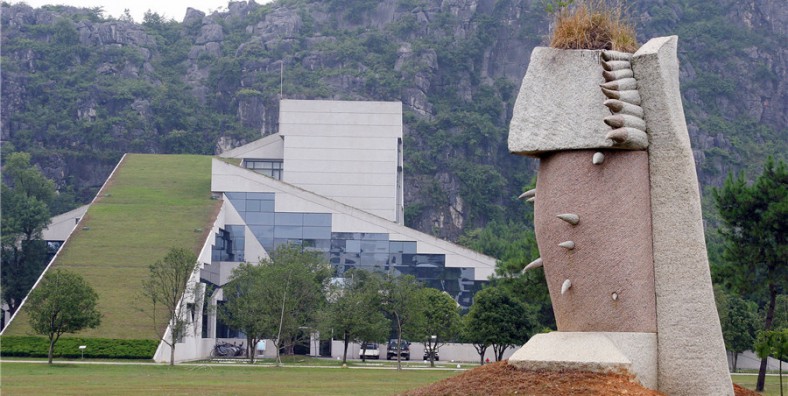 The ultimate goal of Yuzi Paradise is to build a living museum and pass on the best cultural heritage of contemporary art to future generations. The ideal is to protect nature, create culture and strive to realize the perfect combination of nature and culture.

Why is Yuzi Paradise So Special?

Guilin, a mysterious and charming city, is renowned for its picturesque scenery of beautiful mountains and clear water. People may say that the beautiful scenery of Guilin is limited to nature. However, Guilin also has cultural elements, notably in Yuzi Paradise, a large outdoor art park displaying primarily contemporary sculpture and cavern art. The ultimate goal of Yuzi Paradise is to build a living museum and pass down the best cultural legacy of contemporary art to descendents. The ideal is to conserve nature and create culture, and try to achieve a perfect combination of nature and culture.

Where is Yuzi Paradise

Yuzi Paradise is located in Yanshan District, about 30 kilometers (19 miles) away from Guilin City. It was founded in 1998 and sponsored by Taiwan entrepreneur Cao Ruichang. “Yuzi” means “stupid” in Chinese. According to organizers, the park was not built to pursue profits, but to realize one’s dream. Therefore, some people think that because he is an entrepreneur, his behavior is stupid, hence the name.

History of the Yuzi Paradise

The project is expected to be completed within 30 years and is divided into two phases. The first phase focuses on the construction of an international sculpture park, including a living area, an art village, an art salon, a teaching exhibition area and an outdoor theater. The first phase has been completed. On April 1, 2003, it was opened to the public. In the International Sculpture Park, you can enjoy all kinds of unique sculptures at home and abroad, and you can also see the creation process of artists. This mysterious maze consists of living green fences and shrubs. It is worth visiting and is also very interesting. Here, tourists can experience the fun of finding a way out and raise their awareness of ecological and environmental protection.

The second stage is still in progress, mainly focusing on the development and exploration of cave art. The exploration of cave art includes historical caves, art caves and cave galleries. These caves will display various sculptures by different artists so that the unique artistic achievements of contemporary society can be passed on to future generations.

Yuzi Paradise is outstanding because it is the only public cultural and artistic project in China. The park provides a good opportunity for people to approach art and experience its creation. So far, many artistic and cultural exchanges have been held in Yuzi Paradise. Since 1997, eight international sculpture seminars have been held here. 114 sculptors from 25 countries have participated in the seminars and created 115 unique sculptures. Among the sculptors, some famous foreign artists including French artist Robert Peel Ristig and German artist eberhard Ecclest showed their masterpieces. In addition, the first Guilin Yuzi Paradise International Sculpture Award was held in October 2002 to recognize young potential artists and promote the works of outstanding artists. These activities have promoted cultural exchanges between East and West and enriched the spiritual life of the public.

Yuzi Paradise is a paradise of art and culture. Like beautiful mountains and clear water scenery, Guilin’s splendid sculpture and cave art will always meet the expectations of tourists.