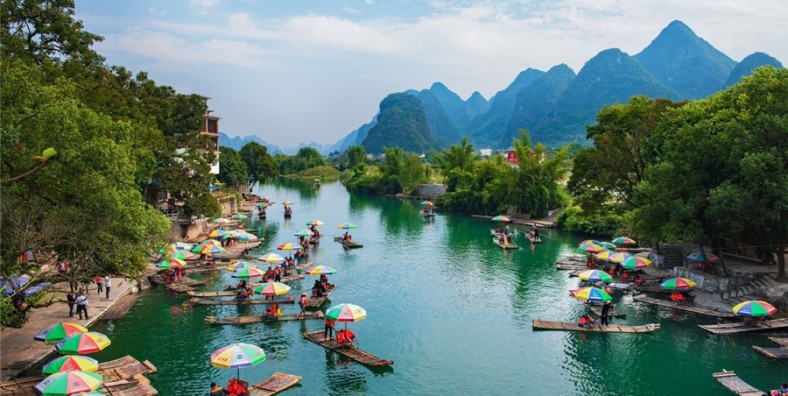 The part of the river that stretches from Yulong Bridge in Baisha Town, to Gongnong Bridge near Big Banyan Tree along the Ten-Mile Gallery, is known as the Yulong River Scenic Area, and includes some spectacular scenic views along each river bank.

Why is Yulong River So Special?

The Yulong River Scenic Area has many tourist attractions interspersed with cultural and historical ones. The languid river is surrounded by a primitive, but pure, natural landscape, combined with green bamboo forests and rolling hills. Visitors to the area will delight in the picturesque scenes of simple rural life: bamboo waterwheels irrigating the paddy fields; village girls hand washing clothes outside of their cottages with smoke curling upward from the chimneys; old men fishing in the river; flocks of ducks swimming in the pond. Idyllic scenes such as these will allow tourists to forget their problems and experience a sense of calm relaxation.

Where is Yulong River

Guiyi site now covers an area of about 40000 square meters, in the Tang dynasty can be called a big county town. Today, of course, any one of the villages and towns are much larger than it. Now the whole county site, only remained the northwest corner of the old well and the two families. On the edge of columns of that ancient well, there was engraved with 2 characters in Chinese “Xun Jiu” (means Finding Old) but today’s Yulong River is brand new.

The three most famous ancient bridges in Guangxi are Yulong Bridge, Xianggui Bridge and Fuliang Bridge, all of which are located in Yulong River Scenic Area. Jiuxian Village, known as the “General’s Office”, is located on the Yulong River. The ruins of Guiyi County in Tang Dynasty, Panzhuang Village, Xu Beihong’s studio and the ancient houses in Ming and Qing Dynasties remind people of the past. However, the most exciting and romantic thing is rafting on the Yulong River.

There is a stone arch bridge on the Yulong River, which is located beside Longcun Village, Baisha Town. Built in the Ming Dynasty, the bridge is 60 meters long, 5 meters wide and 9 meters high. It is built entirely of stone and unused mortar. It will remain intact for hundreds of years and is a key cultural relic in Yangshuo County. The bridge is spectacular. Ivy leaves are covered on both sides of the bridge. It is antique. The villagers under the bridge came here to fetch water and wash clothes on their behalf. Yulong Bridge witnessed the world of this era and it is still strong.

Stone arch bridge, a tributary of Yulong River, is the oldest bridge in Guangxi. The bridge is 2.2 meters high, 26 meters long and 4 meters wide. Built in the Song Dynasty in He Xue for five years (1123 A.D.), the bridge has a unique structure and adopts a rare parallel brick method. The stone arch is made of 9 sets of key stones and 281 stones are arranged in parallel. After 800 years of wind and rain erosion and floods, the bridge is still intact.

There is a single arch stone structure 500 meters upstream of Yulong Bridge. Its deck, railings and stairs are all grey stone, which was built in Yongle Period of Ming Dynasty. This bridge is 30 meters long, 5 meters wide and 10 meters high. It is one of the three ancient bridges in Yangshuo. There is an ancient tree in the bridgehead. Seen from a distance, the arch of the bridge is reflected in the water and connected with the reflection, like a full moon.

The Yulong River scenic area has been under traffic control between 07:00 and 19:00 every day since September 15, 2017. Visitors can only enter the area by foot, bicycle, or special tour bus.

It costs CNY 240 (per bamboo raft) by drifting along the Yulong River (from Jinlong Bridge to Gongnong Bridge).