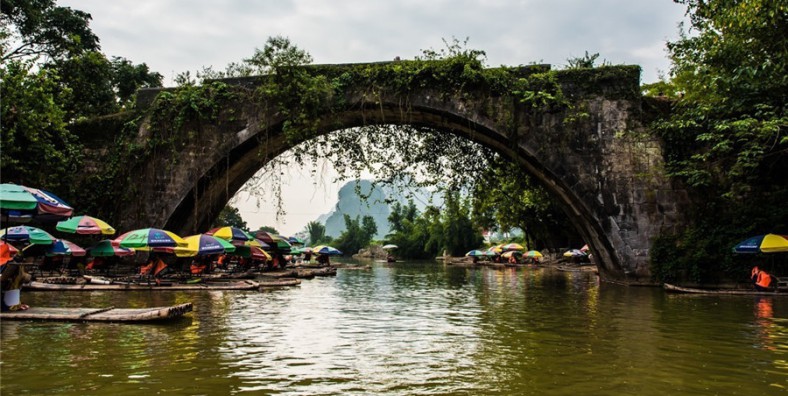 The section of the river that extends from Yulong Bridge in Baisha Town to Gongnong Bridge near the Banyan Tree beside Shili Gallery is called Yulong River Scenic Area, including some spectacular scenery along the banks of the river.

Why is Yulong Bridge So Special?

The Chinese word “Yulong” refers to “meeting a dragon”. According to local legend, a dragon from the East China Sea wandered through the Yulong River and was deeply moved by the charming scenery and decided to stay there forever. Villagers living on the bank of the river saw dragons many times, so the river was named dragon.

Where is Yulong Bridge

Yulong River, also known as the Little Lijiang River, originated in Lingui County, Yangshuo. The river is about 43 kilometers (26 miles) long and has a drainage area of about 158 square kilometers (39,043 acres).

The Yulong River Scenic Area has many tourist attractions interspersed with cultural and historical ones. The languid river is surrounded by a primitive, but pure, natural landscape, combined with green bamboo forests and rolling hills. Visitors to the area will delight in the picturesque scenes of simple rural life: bamboo waterwheels irrigating the paddy fields; village girls hand washing clothes outside of their cottages with smoke curling upward from the chimneys; old men fishing in the river; flocks of ducks swimming in the pond. Idyllic scenes such as these will allow tourists to forget their problems and experience a sense of calm relaxation.

The first is by the river and rented a bamboo raft. The route will take about 6 hours from Jinlong Bridge to Gongnong Bridge. Please don’t rent those rafts without ensuring the life buoy in advance. The second is to enjoy the beautiful scenery along the river and the countryside on foot. This option takes about 4.5 hours.