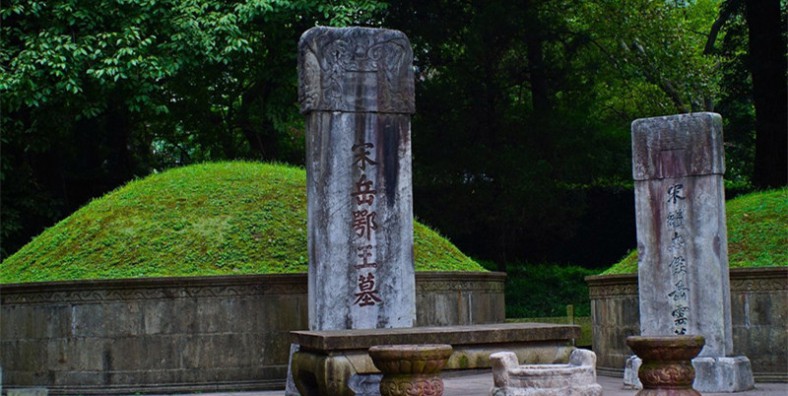 Located at the southern foot of Qixia Hill near the West Lake and occupying an area of 1.57 hectares (3.9 acres), the Tomb of General Yue Fei, also known as Yue Fei Temple, was built in memory of this great hero.

Why is Yuefei Mausoleum in Hangzhou So Special?

Located on the northwest corner of the West Lake, Yue Fei Mausoleum was first built in 1221 in memory of national hero General Yue Fei of Southern Song Dynasty. In the center of main hall is a statue of Yue Fei wearing armored robe. Above the statue hangs an inscription written ‘Recover Our Lost Territories’ in Yue’s own handwriting. His tomb is situated in the west of compound.

From its name, we know that the mausoleum, built in memory of a famous national hero, Yue Fei ((24 March 1103 – 27 January 1142)). Yue Fei was the chief military general of the Southern Song Dynasty (1127 – 1279) during the battle against the Jin Dynasty (1115 – 1234). He is best known for leading Southern Song forces in the wars in the 12th century between Southern Song and the Jurchen-ruled Jin dynasty in northern China before being put to death by the Southern Song government in 1142. A few treacherous court officials persecuted him to his death.

Since the existing Emperor did not dare to give him an honorable burial, it was not until Emperor Gaozong’s death and the succeeding Emperor, that charges against Yue Fei were dropped. After 21 years, Emperor Song Xiaozong (reigning from 1162 to 1189) ordered the exoneration of Yue Fei from the unwarranted crime and had his remains interred here.

Entering the gate with double eaves of the Tomb of General Yue Fei, a patio with towering trees on both sides is found. The Shrine of Remembrance, the main hall, is right in the center. A sculpture of general Yue is set in the middle of the hall. He is in a colorful embroidered round cushion cover. Looking solemn and mighty, he has a sword in his hand and looks as if he is ready to protect his country. Over the sculpture is tablet in the original handwriting of Yue Fei, which states returning our territory and keeping it integrated. At the back of the hall are large pictures depicting his life stories. On the floor of the hall is a picture depicting 373 cranes. These cranes are the symbols of his integrity and faithful mind.

To the west of the main hall of Tomb of General Yue Fei is a yard. There are two corridors exhibiting poems written to commend Yue. Striding over the bridge in the middle of the yard, there are the tombs of Yue Fei and his son’s. The General Yue’s tomb is right in the center, and to its left is the tomb of his son Yue Yun who had been a competent assistant of his father on the battlefields. Stone horses, tigers, and sheep of the Ming Dynasty (1386 – 1644) decorate both sides of the enclosure. The Tomb of General Yue Fei, which had been destroyed several times, was rebuilt and possesses the features of the Song Dynasty. Facing the tomb are four iron sculptures,  including Qin Hui the chief plotter, in kneeling position. Concerning these sculptures, people wanted them to atone for their crime forever.

How to get to Yuefei Mausoleum From Hangzhou

If you want to get out of the traffic and hassle of navigation, you can book a private tour package that includes visiting, dining and transfer from us. Our local guide and driver will escort you to Yuefei Mausoleum in Hangzhou in the fastest and most convenient way and take care of all the details. You just have to focus on the visiting.