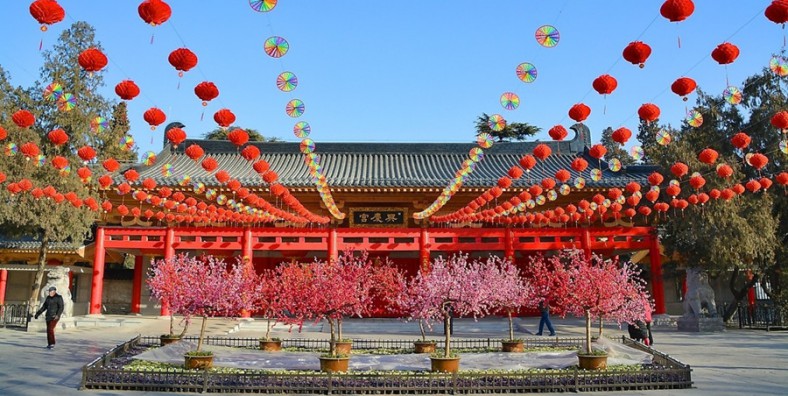 Located to the north of the West Xianning Road in the Beilin District of Xi'an, the Xingqinggong Park (Xingqing Palace Park) is a famous historical and cultural relic in Xi'an. Built in 1958 on the site of the ancient Xingqing Palace, the park is the largest city park in Xi'an, covering a total area of 621,915 square yards (520,000 square meters).

Popular Activities: Enjoy the scenery, take a walk, have a culture tour

Why is Xingqinggong Park So Special?

Located to the north of the West Xianning Road in the Beilin District of Xi’an City, the Xingqinggong Park (Xingqing Palace Park) is a famous historical and cultural relic in Xi’an. Built in 1958 on the site of the ancient Xingqing Palace, the park is the largest city park in Xi’an, covering a total area of 621,915 square yards (520,000 square meters).

As the political center during the reign of the Tang Emperor Xuanzong (Li Longji) between 712 and 756, the Xingqing Palace was one of the three largest palaces in the Tang Dynasty (618-907).

It had been called the “Mansion of Five Princes” where the brothers of Crown Prince Li Longji lived. After Li Longji ascended to the throne and became Emperor Xuanzong, his brothers presented the mansion to him in July, 714. In September 714, the mansion started to be transformed to the Xingqing Palace. Later, Emperor Xuanzong moved to the palace to live with his beloved imperial concubine Yang Yuhuan in 728. After the An Lushan Rebellion (755-763), the Xingqing Palace lost the position as a political center and became the place where retired emperors lived. At the end of the Tang Dynasty, the city of Chang’an was ruined and the Xingqing Palace was deserted.

The Xingqing Lake, the primary scenery in the park, is located in the centre of the park, and covers an area of ten hectares. It was equal to nearly 1\5 of the total are of the whole park. It was laid out on the site of the original Dragon Pool of the Xiangqing Palace in the Tang Dynasty. According to historical records, Emperor Xuan Zong used to go boating, sightseeing and feasting together with his concubines and officials here on the lake.

It is said that the Chenxiang Pavilion was built with agolloth eagle-woods; hence its name, around the pavilion, there are varieties of precious flowers, such as tree and herbaceous peonies. Emperor Xuan Zong, together with his favorite concubine Yang Guifei, used to share the pleasure of appreciating flowers in bloom every year. He once met the famous poet, Li Bai here and asked him to improvise a poem about the peony blossom.

The Flower Shedding Brilliance Gallery was one of the main structures of the Xingqing Palace. Emperor Xuan Zong gained his imperial crown by staging a palace coup. To keep his brothers from doing the same thing, he had this building built in the Xingqing Palace. He gave it the name the Flower Shedding Brilliance Gallery, so it would serve as a metaphor to indicate that brothers ought to be dear to each other, and help each other, like the shedding of brilliance between flowers and calyxes.

The Government Administration Building is located in the southwest corner of the Xingqing Palace. Emperor Xuan Zong named it the Government Administration Building just to indicate that he would be industrious in state affairs, and be concerned about the joys and sorrows of the people. He was one of the emperors who made the greatest achievements in Chinese history. During his early years in power, he roused himself, and vigorously acted to make the Tang Dynasty the most prosperous dynasty of all. The feudal society of China was thus led to its peak.

Winter is not a good time to travel Xi’an, followed by summer: winter is cold and dry, the temperature is low, cold and biting when the wind blows.At this time to visit the indoor attractions more appropriate. Summer is very hot, especially in the middle of summer, the sun is strong, around noon is the sun exposure; There are occasional storms, but they come and go quickly. Please take precautions against sun protection when you go out.

How to get to Tangyu Hot Springs

If you want to get out of the traffic and hassle of navigation, you can book a private tour package that includes visiting, dining and transfer from us. Our local guide and driver will escort you to the Xingqinggong Park in Xi’an in the fastest and most convenient way and take care of all the details. You just have to focus on the visiting.