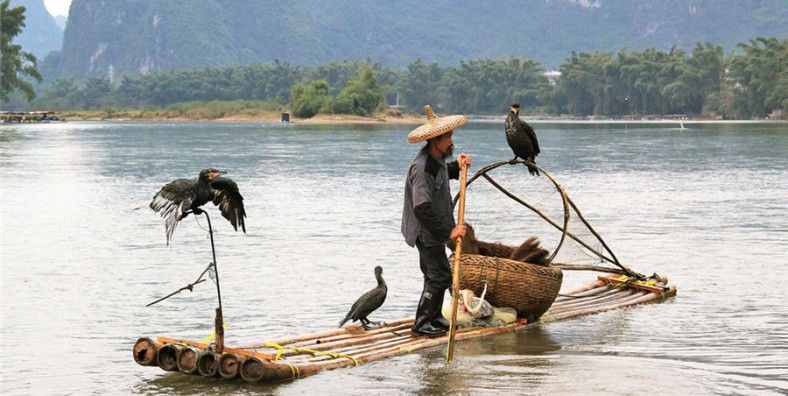 The town is really a beautiful place, surrounded by enthralling scenery. Both Mural Hill and Yellow Cloth Shoal belong to this scenic area.

Why is Xingping Scenic Area So Special?

The charm of the Xingping Town is greatly enhanced by the surrounding hills. The town is located at the foot of Wuzhi (five fingers) Hill. The hills in the east are Sengni Hill that resemble a monk and a nun are bickering with each other, Chaoban Hill is said to look like the tablet held by officials in court in ancient times and Arhat Hill looks like a smiling arhat monk exposing his breast to the sun. The hills in the south are Carp Hill and Snail Hill. The hills in the west are Bijia (pen holder) Hill and Meinv (belle) Peak. The hill in the north is Camel Hill resembling a camel crossing the river.

Where is Xingping Scenic Area

Once, in ancient times, Xingping Town was the largest town along the Li River, and is 63 km (39 miles) from Guilin and 25 km (15.5 miles) from Yangshuo, on the east bank of the river.

The historical relics here can be found in Xingping old street and fishing village about 2 kilometers (1.3 miles) from Xingping town. Old street is a one kilometer long stone street lined with old brick buildings and auditoriums like many different provinces. The ancient banyan tree requires up to eight people to extend their arms around it, while the Guandi temple built in the Qing dynasty tells the long history of xingping town.

Fishing villages have a history of nearly 500 years. It typically represents the architectural style of northern Guangxi during the Ming and Qing dynasties, and the houses in the village are consistent with Xingping Town. They have horse-headed walls, cornices, painted rafters and patterned windows. When former US President Bill Clinton and his wife visited here, they highly praised the village and were deeply attracted by the houses there. The villagers live on cormorants. Maybe you can go fishing with them on a raft instead of a boat. This is really exciting. Not far from the village is Di Shui Village, where there is a waterfall. Water is often used for brewing wine.

There is a new lotus cave 3 kilometers (1.9 miles) to the north-east of Xingping town. The cave is more than 600 meters long and 2 meters wide along its widest part. Amazing stalactites of different shapes can be seen in the cave. For example, the main scenic spots include “upside down lotus petals hanging”, “two dragons climbing out of the cave” and 108 large and small “lotus pods”. The diameter of the “lotus seed pod” ranges from 20 cm to 1.5 meters (4.9 feet). The small stones in the pod look like real seeds. What a surprise! In spring and autumn, under a layer of mist, the scenery is really lifelike. There is a piece of stalactite that makes a pleasant sound when struck. Would you like to have a try?

This fishing village is located on the east bank of Lijiang River in the upper reaches of Yangshuo and has a history of more than 500 years. Built in 1506 in the Ming Dynasty, this picturesque village is full of typical local cultures of Lingnan or southeast China.

48 traditional houses have been well preserved for many years. Features of these houses include blue brick, black tile, sloping roof, horse-headed wall, cornice and carved windows. These houses are classic examples of Ming (1368-1644) and Qing (1644-1911) dynasties.

The natural scenery in this area is striking. All kinds of mountains including Li Yu (carp), Jin Wa (golden tile), Yuanbao and Jiandao (sword and sword) are standing on one side as if they were bodyguards to protect the small village.

Behind the village is a steep hilly area called Tianshui stockade. Despite its strategic position in military history, it occupies only three acres. The area is surrounded by cliffs and can only be crossed by a narrow path.

Historically, this area has been the destination of many outstanding figures. In 1921, the first president of the Republic of China, dr sun yat-sen, boarded the Tianshui stockade and highly praised the beautiful scenery here. When US President Bill Clinton and First Lady Hillary Clinton visited China in 1998, they expressed their admiration for the simple and real features of the village.